By Susanna Reich and Gary Golio

The power of music to inspire action is explored in two non-fiction picture books out this month: Stand Up and Sing! Pete Seger, Folk Music and the Path to Justice by Susanna Reich, illustrated by Adam Gustavson (Bloomsbury, March 2017) and Strange Fruit: Billie Holiday and the Power of a Protest Song by Gary Golio, illustrated by Charlotte Riley-Webb (Millbrook Press, March 2017).

Husband and wife authors Susanna Reich and Gary Golio interviewed each other about the songs and inspiration behind their new books.

Gary: Why a book about Pete?

Susanna: Pete Seeger had long been on my list of possible subjects when my agent connected me with Mary Kate Castellani, an editor at Bloomsbury. Her enthusiasm for Pete fired me up, and soon I was burning through every book I could find by and about him.

The fun of researching a musician, of course, lies in the perfect excuse it gives you to watch music videos on YouTube when you’re supposedly “working.” 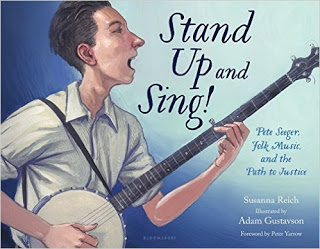 Susanna: Where did you get the idea to write about the song “Strange Fruit”?

Gary: In this case, I was fascinated by the story of how three people–the songwriter (Abel Meeropol), the singer (Billie Holiday), and the club owner (Barney Josephson)–each played their part in bringing a unique work of art–the anti-lynching song “Strange Fruit”–to the world.

Collaboration is often overlooked in the process of artmaking, yet the debut of this remarkable song depended completely on a combination of talents and resources. 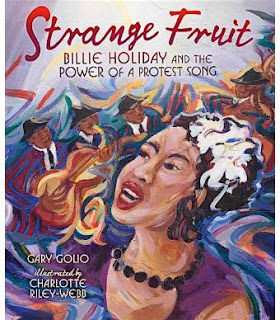 Gary: Reading your book, it’s clear that you felt a strong personal connection to Pete, his music, and the work he did. Did you ever see or hear him in person?

Susanna: If you grew up in the Hudson Valley in the mid-20th century, it would have been hard not to hear Pete sing. He was constantly performing at local libraries, summer camps, waterfront festivals and political rallies.

I always knew that he and I had in common a love of the Hudson River, and that we both came from musical families with left-leaning politics.

As I did my research, my appreciation for him really grew. He was fierce and uncompromising in his dedication to the causes he believed in and had an amazing gift for bringing people together and lifting them up with music.

Susanna: So what’s your personal connection to Billie, Abel, Barney, and the song they brought into the world? By way of collaboration: how do you find a balance as an author between expressing your own vision and working with an illustrator and editor to make a picture book?

Gary: Fortunately for me, the process of creating a book thwarts my natural If I Were King impulse, and the books are all the better for it. You have to become part of an orchestra.

Fortunately, I’ve also had great editors (like Carol Hinz) and illustrators (like Charlotte Riley-Webb), who aren’t afraid of bold subjects.

As for my connection with Abel, Billie, and Barney, I’ve always considered myself an outsider, and there’s nothing that irks me more than injustice directed against a group of innocent people. The good news is that something like a song can address injustice, and even catalyze social change.

Gary: So Pete was a pretty self-effacing guy – what do you think he’d make of your book, and being the heroic subject of a bio for kids?

Susanna: I think he would’ve been okay with it, since the point of the book isn’t to turn him into a hero but to show how he used music in pursuit of social justice.

He played a role in the great social movements of the 20th century–speaking out for unions and civil rights, opposing McCarthyism and the Vietnam War, advocating for the environment and an end to nuclear arms. This is history that kids need to know, and understanding how he combined art and politics is important and timely.

Susanna: Your book shows the intersection of art and politics too. What do you hope kids will take away from it?

Gary: That people need each other to make something bigger than themselves.

Look at Charlotte Riley-Webb’s images for the book–I truly believe that Billie would be immensely gratified to see a woman artist promoting the message of “Strange Fruit” with brushes and paint. Art is storytelling, and Charlotte’s work speaks to our time, both as Art and Politics.


Susanna: Speaking of art, I especially appreciate illustrator Adam Gustavson’s attention to period detail in Stand Up and Sing!, and his brilliant idea to create a background texture reminiscent of a calfskin banjo head.

His exquisite paintings really enhance the emotional impact of the text and make a beautiful music all their own. 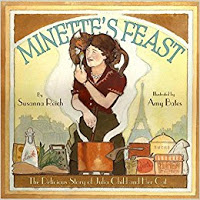 Susanna Reich has been writing books for children since 1994. Her first book, Clara Schumann: Piano Virtuoso (Clarion, 1999) won an Orbis Pictus Honor, was an ALA Notable and Best Book for Young Adults and a School Library Journal Best Book of the Year. She’s also written biographies of dancer Jose Limon, artist George Catlin and the Beatles, as well as two MG novels. Minette’s Feast: The Delicious Story of Julia Child and Her Cat, illustrated by Amy Bates (Abrams Books for Young Readers, 2012) was named a CCBC Choices Best Book of the Year and received critical acclaim. Stand Up and Sing! Pete Seeger, Folk Music and the Path to Justice has been named a Junior Library Guild selection.

Gary Golio gravitates to musical subjects for his picture book biographies. His first book, Jimi: Sounds Like a Rainbow, A Story of the Young Jimi Hendrix, illustrated by Javaka Steptoe (Clarion, 2010) became a New York Times Bestseller and was named to the Kirkus Reviews Best Children’s Books for the Year. His other titles include When Bob Met Woody: The Story of the Young Bob Dylan, illustrated by Marc Burckhardt (Little, Brown Books for Young Readers, 2011), Spirit Seeker: John Coltrane’s Musical Journey, illustrated by Rudy Gutierrez (Clarion, 2012) and Bird and Diz: Two Friends Create Bebop, illustrated by Ed Young (Candlewick, 2015), named an ALA Notable book and Junior Library Guild Selection. Strange Fruit: Billie Holiday and the Power of a Protest Song received a starred review from Kirkus and Publishers Weekly. 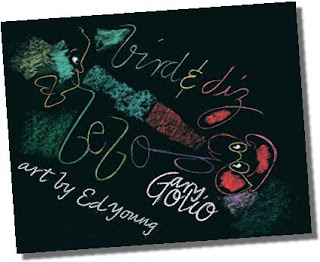