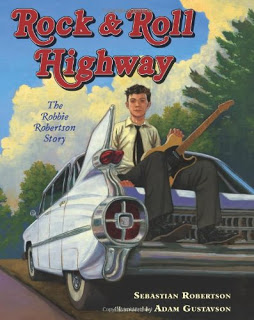 My love of music outweighs my love of the written word. So, I am delighted when I find children’s
book biographies written about any of my favorite musicians. I rush to devour them and learn more about the creative geniuses whose beautiful lyrics and magical melodies have lifted my spirit or given me comfort throughout my life.

I am honored to shine Cynsations’ spotlight today on Sebastian Robertson (Mohawk/Cayuga), a children’s book author, musician and composer doing that work.

Sebastian has written about rock and roll legends – including his father, Robbie Robertson, the award-winning lead guitarist and primary songwriter for The Band. In Rock and Roll Highway (Henry Holt, 2014),

Sebastian chronicles his father’s musical path as a child playing guitar with his First Nations relatives in Canada to playing on the road professionally by age fifteen. The picture book biography also talks about Buddy Holly’s advice for Robbie, recording and touring with Bob Dylan, and having The Band’s final concert, The Last Waltz, filmed by Martin Scorsese.

Sebastian graciously agreed to share thoughts about his work and give away two signed copies of Rock & Rock Highway to Cynsations’ readers.

What excites you about writing children’s literature?

As a teenager I taught Mommy and Me classes and felt a really strong connection with the kids. It wasn’t just a job it was a passion of mine for many, many years. In fact, it was through my experience teaching that the idea for Legends, Icons and Rebels was birthed.

Monitoring how the children reacted to and engaged with the music that we would play during class time was a lot of fun, especially when I could get them grooving to some James Brown or Aretha. Tapping into a mind that isn’t jaded or isn’t already made up is probably the most exciting aspect of writing for children.

Which do you enjoy writing the most – fiction, nonfiction, picture books, novels or something else?


At this point, my three works consist of non-fiction with a focus on music and history. It’s just where I’ve ended up. I didn’t strive for this specific type of storytelling but it’s most certainly a good fit for me. I do have a couple fiction ideas up my sleeve that I’m pretty excited about, though.

What was it like writing about your father’s life in Rock and Roll Highway?


It was a blast. It kind of took me back to a more child-like place as if I were doing a book report on my dad. We would meet for lunch and I would ask him all kinds of questions.

When I was near completing the book I realized how important this interviewing process was so I asked the publisher if I could include a short Q&A in the back of the book. They agreed, and if I could convey any message through that book, it would be for children to interview their parents.

As parents we sometimes forget relatable details that I found extremely interesting. Little things, like who was your best friend, what was your favorite thing to eat and how much homework did you have?

Tell me about the relationship between writing books and music in your life?


The relationship has become that I’m always looking for a musical angle to tell kids about in my books. It’s what I do and it’s what I know so coming from a place of that much passion feels very intuitive.

What is your writing process?


I try not to think too much. My truth is that more often than not, my first idea is the best one. For instance, in Rock And Roll Highway, my first thought was to mirror The Last Waltz and begin the book at the end of the story. It felt right, I got a charge from it so away I went, full steam ahead. That and a lot of staring at a blinking cursor.

What has been the most challenging part of being a writer?

The balance between my music career and my writing career can make things difficult. Time management! I wish I was more disciplined.


Being indigenous has provided more opportunities for me at this point. It has opened up the world of possibilities creatively. After collaborating with my dad on Hiawatha And The Peacemaker (Abrams, 2015), I am now looking at writing more books based on my heritage.

The importance of indigenous culture is not a priority in our country, which is a travesty. Without sounding grandiose, if I can contribute on any level to bringing this culture more to the forefront it will be an incredible success for me.

Have you seen your writing evolve over the years?


Most definitely, I’m not as terrible as I used to be.

What are you writing now?


I have two books I’m currently developing but I’ve gotta’ keep ‘em on the down low. One is a non-fiction inspired by my First Nations background and one is a fiction idea that is based in music. Who would’ve guessed?

Before Rock and Roll Highway, Sebastian Robertson co-authored Legends, Icons & Rebels: Music That Changed the World (Tundra Books, 2013), with his father, Jim Guerinot, and Jared Levine. It introduces young readers to 27 pioneering musicians and singers across several genres of music and includes two CDs with a classic track from each artist with the hardcover version.

When he’s not writing children’s books, Sebastian works as a composer and songwriter. He has written music for many major television series, ads, video games and films. He lives with his family in Los Angeles.

Although Traci Sorell had heard many of Robbie Robertson’s iconic songs with The Band, she did not know of him until she bought his 1994 third solo album, Music for the Native Americans, which is still one of her favorites. Since then, she has enjoyed sharing his music and Sebastian’s books with her family and friends.