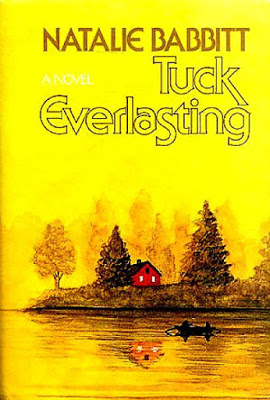 ‘Tuck Everlasting’ Author Natalie Babbitt, Of Hamden, Dies At Age 84 by the Associated Press from The Hartford Courant. Peek: “Babbitt’s literary career started in 1966, when she illustrated a children’s book written by her husband and was encouraged by its editor to continue writing and illustrating children’s books herself.”

Obituary: Natalie Babbitt by Shannon Maughan from Publishers Weekly. Peek: “The subject matter—is living forever a good thing? —was somewhat controversial when the book [Tuck Everlasting] was published in 1975, especially in schools, but strong word-of-mouth and support from educators and librarians helped it grow into an enduring favorite.”

Natalie Babbitt, 1932-2016 from the Horn Book. Peek: “Natalie Babbitt was also a great friend of the Horn Book; see below just a sampling of her contributions to the magazine over the years, plus a few reviews and appreciations.”

Tuck Everlasting author Natalie Babbitt dies at 84 from The Guardian. Peek: “The 1975 novel, which has sold over 3.5m copies…has been adapted into two movies and a Broadway play..she was a National Book Award finalist for The Devil’s Storybook in 1975.”

She received many honored including a Newbery Honor for Knee-Knock Rise (FSG, 1971) and the inaugural E.B. White Award in 2013.