In August of 2014, I traveled from my Long Island City studio to downtown New York City, lugging KIWiStorybook frames and rolled-up giant walk-in picture books, about to be the first author interviewed for the media start-up, KidLit TV.

Four hours later we had a wrap, edited into a lively eight-minute piece, which aired that November, launching one of the most original concepts in the world of children’s literature in years.

Although most of the content is accessible to any literate person, there can be a lot of fun esoterica. For example, librarians may talk about how award committees work or recommend seasonal books; for the 2015 StoryMakers Holiday Special, Maria Russo (New York Times), John Sellers (Publishers Weekly), and John Schumacher (Scholastic) discussed their favorites with Rocco. Other children’s literature movers and shakers are featured, like Lin Oliver and Stephen Mooser, talking about founding SCBWI, and Judy Blume and Neil Gaiman discussing censorship.

Aimed specifically at children is the Read Out Loud show where authors engage kids with lively readings from their books. On Ready Set Draw!, illustrators inspire viewers to do art and show details on how to draw characters from their books. Dan Yaccarino taught kids how to make Doug from “Doug Unplugged”; Nick Bruel drew Bad Kitty; I showed children how to draw the owl from “Hatch!” and how to make a maze.

Children send in their own drawings based on the videos, and KidLit TV posts them online in their new Fan Art Gallery section, using #ReadySetDraw to share fan art.

KidLit Radio is launching podcasts for children, filling an important niche. Radio is as popular as ever, and podcasts are gaining ground. Audio is an important medium – many children learn, and are entertained, by listening. Recently Barbara McClintock and Peg + Cat (Candlewick) creators Jennifer Oxley and Billy Aronson did podcasts.

KidLit TV also covers events under their Red Carpet feature, like the Eric Carle Awards, interviewing such luminaries as Jerry Pinkney, Roaring Brook’s Neal Porter, and Hilary Knight. The most recent Field Trip is a six-minute video of the 4th Annual 21st Century Children’s Nonfiction Conference, with uber librarian and reviewer Susannah Richards doing the interviews, including one with Steve Sheinken about his process and his next book.

All of this content is found on the main KidLit.TV site; there’s also a robust social media presence and an extensive YouTube channel. It’s the go-to place for kid friendly videos about favorite authors and illustrators, book-based crafts and activities, and to check out content dear to the hearts of children’s literature aficionados. Not to mention how to draw a Great Horned Owl!

So how did this come about? Well, multiple Emmy-award-winner and Stony Brook Children’s Literature Fellow, Julie Gribble, who worked in the television industry for years, founded KidLit TV to create fun new ways to reinforce an appreciation of reading that children will carry with them for the rest of their lives– it’s the first online resource of its kind for kids, parents, librarians and teachers. She’s an author in her own right, with Bubblegum Princess, illustrated by Lori Hanson (NY Media Works, 2013)(based on a true story about Kate Middleton) and another picture book out soon.

Julie’s KidLit TV family of teachers, librarians, authors, illustrators, and tech folks are all deeply committed to working together to bring great books to kids. 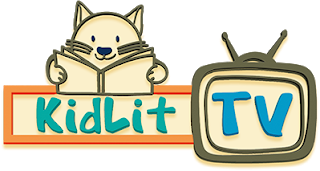 And Roxie has contributed a piece to TLA’s Disaster Relief Coloring Book, which will be available at the Conference.