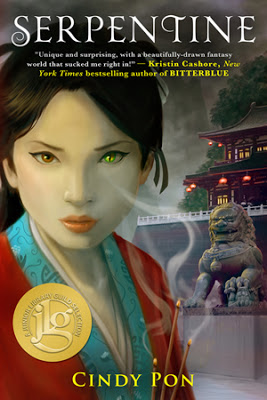 Congratulations to Cindy Pon on the release of Serpentine (Month9Books), “a sweeping fantasy set in the ancient Kingdom of Xia and inspired by the rich history of Chinese mythology.” From the promotional copy:

“Lush with details from Chinese folklore, Serpentine tells the coming of age story of Skybright, a young girl who worries about her growing otherness. As she turns sixteen, Skybright notices troubling changes. By day, she is a companion and handmaid to the youngest daughter of a very wealthy family. But nighttime brings with it a darkness that not even daybreak can quell.


“When her plight can no longer be denied, Skybright learns that despite a dark destiny, she must struggle to retain her sense of self – even as she falls in love for the first time.”

Music Meets Military History by M.T. Anderson from TeachingBooks.net. Peek: “I pictured telling this story to those kids I’ve met who are so passionate about music (any kind of music!) or the arts – the drama kids, the band kids, the writing kids, the painting kids … or, for that matter, the military history nerds out there who, like me, love poring over maps of battle plans and hearing about the specs of Stuka diver-bombers.” See also The Music That Brought Hope to a Besieged City: an audio interview with M.T. Anderson from Robin Young at Here and Now at Boston NPR. Highlight’s Symphony for the City of the Dead: Dmitri Shostakovich and the Siege of Leningrad (Candlewick, 2015).

Reading While White: Allies for Racial Diversity and Inclusion in Books for Children. Peek: “We are learning, and hold ourselves responsible for understanding how our whiteness impacts our perspectives and our behavior.” 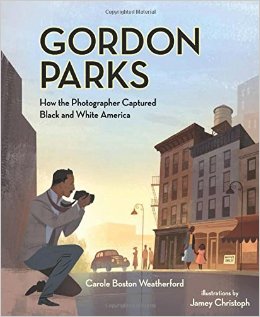 How to Talk to Kids About Racism in America — With a Picture Book by Colton Valentine from The Huffington Post. Peek: “…the book traces Parks’ journey from Fort Scott, Kansas, to Washington, D.C., as he nurtured his interest in photography as a way to document and expose oppression in the United States.”

It’s Not All Death, Dystopia & Disaster: YA Novels to Tickle the Funny Bone by Joy Fleishhacker from School Library Journal. Peek: “Filled with memorable characters and laugh-out-loud moments, these entertaining tales of friendship, love, and self-discovery explore coming-of-age themes…” Note: bibliography of recommendations.

Rejecting Rejection with Author Paige Britt from the Writing Barn. Peek: “Writing taught me that the ‘product’ of my writing was not my manuscript. It was me. I was not the same person I was when I sat down at my computer all those years ago. Writing had transformed me.”

Shorter Focus = Successful Writing by Kristi Holl from Writer’s First Aid. Peek: “Small steps don’t look overwhelming. They look simple and do-able, if you’ve made them small enough. And we don’t have to be speed demons either.”

The Opposite of Colorblind: Why It’s Essential to Talk to Children About Race by Stacy Whitman from Lee & Low. Peek: “Teaching children to be ‘colorblind’ has led children (and adults) to believe that it’s rude or racist to even point out racial differences—even kids of color. This makes it exponentially harder to have frank discussions about racial issues when they need to be had.” 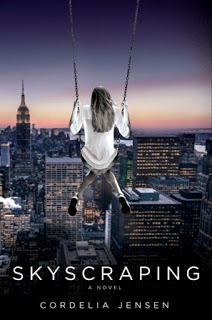 Cordelia Jensen and Skyscraping
from The Launch Pad. Peek: “There was a fair amount of difficulty. But the two hardest parts were probably my editor requesting that I cut all the dialogue out of the book (keep in mind, this is a verse novel) and the second was cutting out a few characters I felt attached to.”

Surviving Santiago: A Conversation with Lyn Miller Lachmann from Adventures in YA Publishing. Peek: “When I was in Chile, I saw that among my friends who had spent more than a decade fighting the dictatorship, and once the elections were over and they were seen as having ‘won,’ it was hard to find a new role.”

Author Varian Johnson by Sara Zarr from This Creative Life podcast. Peek: “Varian’s ten years as a published author and how he has weathered the disappointments and triumphs along the way, including an almost-quitting incident that his agent tricked him out of.”

Transformers: Reimaginging a World by Malinda Lo from The Horn Book. Peek: “I realized that I didn’t need to write a coming-out story. Ash was set in a fantasy world, and there was no need for same-sex love to be taboo there. I made the creative decision to let it be entirely normal, and Ash got to have her happily-ever-after.”

Tales Out of School: An Interview with 2015 Margaret A. Edwards Award Winner Sharon Draper by Deborah Taylor from School Library Journal. Peek: “I had a student who didn’t like to write, who grumbled at me from the back of the room, ‘Why don’t you write something sometime? You’re always making us write.’ He gave me a crumpled-up copy of Ebony Magazine’s short story contest….”

Does a True Artist Care What His Audience Thinks? by Adam Kirsch from the New York Times. Peek: “Art is a form of communication, and communication cannot be totally autonomous, just as there can be no such thing as a private language.” 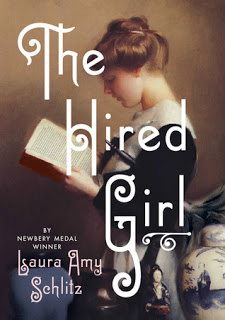 Newbery Winner Laura Amy Schlitz on Women, Writing, History, and Hired Girls by Kiera Parrott from School Library Journal. Peek: “Part of me is green with envy when I hear about writers who have an outline, because that would take so much of terror out of the process. But it would also take some of the suspense out of the process.”

Best Times to Post for Retweets and Likes by Devin Coldewey from NBC News. Peek: “New research has some straightforward advice for you.”

Transgender Children’s Books Fill a Void and Break a Taboo by Alexandra Alter from The New York Times. Peek: “This year, children’s publishers are releasing around half a dozen novels in a spectrum of genres, including science fiction and young adult romance, that star transgender children and teenagers.” See also Middle School Pride: LBGTQ + Tweens in Literature for Youth by Kelly Dickson from The Hub and How to Talk to Your Children About What “Transgender” Means by Charlesbridge Editor Yolanda Scott from CBC Diversity.

Go Global: We Are The World by Veronica Grijalva from CBC Diversity. Peek: “Educators might worry that young readers would be hesitant to read stories that aren’t set in their home country but, if a child can enjoy stories set in fantasy worlds, their unfettered imaginations can imagine and enjoy fantastic experiences set half a world away.”

Author School Visits: Preparing for Your First by Donna Galanti from Project Mayhem. Peek: “As my anxiety ramped up I was informed of my one goal (according to my son): Do not be boring.”

Size Acceptance in YA: “examining bodies, shape, and size in YA literature.” 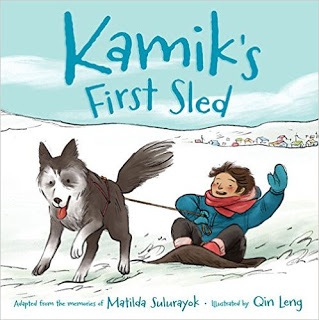 Kamik’s First Sled by Matilda Sulurayok and Qin Leng: a recommendation from Debbie Reese at American Indians in Children’s Literature. Peek: “Through Kamik, Jake, and his grandparents, kids learn about Inuit life, and they learn some Inuit words, too.”

The Importance of Psychological Development in Character Growth by Becca Puglisi from Writers Helping Writers. Peek: “Understanding where your characters are developmentally is the beginning to writing them consistently and creating realistic arcs for their growth and development.”

Industry Q&A with Editor Liz Szabla from CBC Diversity. Peek: “I’d rather ask honest questions than assume I understand something that I’m not familiar with. I don’t want to push my sensibility on any author or any character. It’s an intuitive, creative process that is difficult to explain.”

Mirrors and Windows: Conversations with Jacqueline Woodson by Renee Watson from Rethinking Schools. Peek: “My biggest fear would be to be dishonest to myself, to live a half-life, to not tell the stories I was put here to tell.” 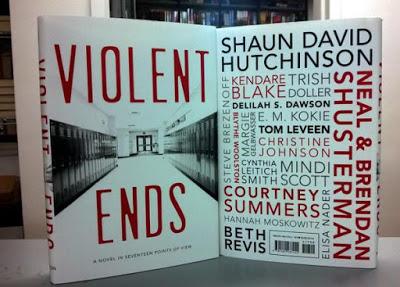 Terrific News! Violent Ends, edited by Shaun David Hutchinson (Simon Pulse, 2015), is now available, and I’m honored to be a chapter-contributing co-author. The book is set around a school shooting and told in alternating point of view, by alternating authors, from characters connected to the tragedy. See excerpt.

“The storytelling is wonderfully intense and distinctive on such a difficult, tragic topic. Readers will be captivated, not wanting to put the book down, but also needing a break due to the extremely engaging, emotionally charged content of characters’ feelings and thoughts.”

What’s more, I will be featured at the 20th Anniversary Texas Book Festival on Oct. 17 and Oct. 18 in Austin. I look forward to joining Ann Angel and Varian Johnson in discussing the anthology Things I’ll Never Say: Stories About Our Secret Selves (Candlewick, 2015).

Want to read something spooky? The electronic edition of Diabolical (Candlewick), is on sale this month for $1.99!

Congratulations to VCFA alum and former Austin SCBWI RA Debbie Gonzales on her first trade sale, Play Like a Girl, to Charlesbridge for publication in fall 2017. It’s “a non-fiction picture book about courageous female athletes from 1827 to present day and the eventual passing of Title IX.”

Congratulations to Austin SCBWI’s own Donna Janell Bowman on receiving the SCBWI nonfiction work-in-progress grant for Tomboy: The Daring Life of Blanche Stuart Scott and the SCBWI book launch award for Step Right Up: How Doc and Jim Taught the World About Kindness (Lee and Low, 2016).

Link of the Week: The Deepest Gift by Marion Dane Bauer from Just Thinking. Peek: “The advantage of being, by anyone’s measure, an old woman is that so much falls away. So much of the need for attention. So much of the desire for my work to be seen as better than. . . . “