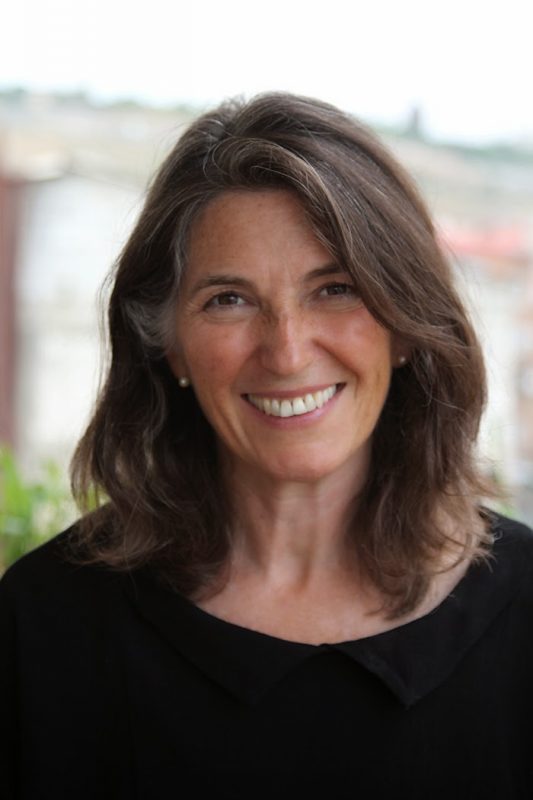 My first novel, Like Water on Stone, just came out (Delacorte, Nov. 2014). Of course, I’m smiling. The cover and interior of the book are beautifully produced. I’ve poured my soul into it.

When I tell them, “It’s the story of three siblings who survive the Armenian genocide of 1915 with the help of the guardian spirit of an eagle,” I’ve learned that I better get my smile under control.

Genocide and smiles do not go together.

And yet I know that “smile-worthy” hope and the power of the imagination fill this story, even as it minces no words about the violence. The three young siblings not only survive, but they survive intact, because their imaginations protect them. Ardziv, the eagle, embodies imagination. Just as he protects the young ones as they journey, he protects the readers.

Ardziv also protected me as I wrote this story.

Like Water on Stone, grew out of one the very few things my mother told me about her own mother’s life: “After her parents were killed, she and her younger brother and sister hid during the day and ran at night from their home in Palu to the orphanage in Aleppo.” 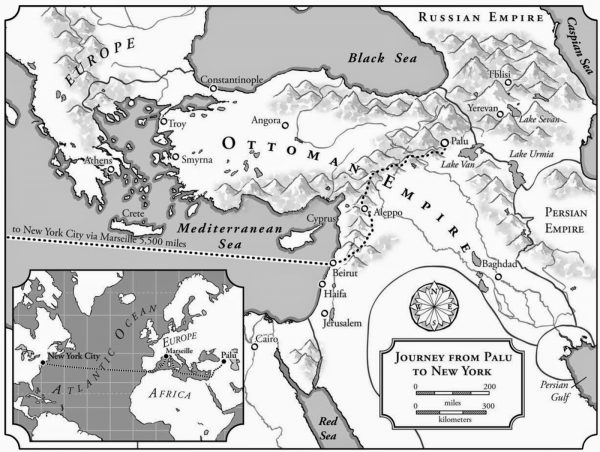 I was in elementary school when I learned this, and it took me decades to fill in the flesh around those bare bones. I knew this story had to be told, especially in the face of global politics that allow for continued denial of this first genocide of the 20th century. But I knew it had to be told in a way that would pull readers along, instead of punishing them.

The story flowed out in lyrical free verse instead of prose, the abundant white space providing safety for the reader, just as Ardziv does. The crumbling Ottoman Empire, whose leaders orchestrated the genocide, is distant in time, space, and experience for readers. Free verse evokes the feeling of foods, music, dances, and ritual from another land. Because it works through metaphor and magic, free verse also shows all that was physically lost, and how it persists in the imaginations of survivors.

Keeping my Armenian identity hidden, I had traveled to my grandparents’ homeland the summer of 1984. With the hospitality characteristic of the region, I was welcomed into people’s homes and fed foods I had known my whole life. In Palu, I asked locals if they knew of any mills—my great grandfather had been a miller. I was sent across the eastern branch of the Euphrates River on a modern bridge next to a crumbling one built of stone, and into the woods when I found a mill, set along the banks of a stream. On the rooftop the woman of the house served me tea, a half dozen children watching us, mounds of apricots drying in the sun.

When I asked about the mill’s history she told me that it had been in her family for sixty years, but before that it had belonged to Armenians. Joy and pain converged as I thought this could perhaps have been my family’s home. 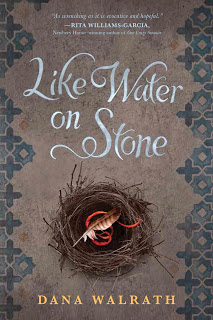 Psychologist Paul Ekman—who has spent a lifetime analyzing the connection between emotion and facial expression— shows us that when we remember the death of a loved one, our faces reflect a blend of strong sadness, moderate anger and moderate joy.

When a book touches me, it passes the “tear test”– bringing tears to my eyes not because of sadness but because of connection.

We write to connect. We read to connect. Connecting is complicated. Our faces reflect that.

This human capacity for hope, magical thinking, and imagination in the face of the deepest pain, builds a bridge from the dark places to joy. We know this complexity and connection in the marrow of our bones, that place where our bodies make our blood and keep us flowing.

Enter to win a signed copy of Like Water on Stone by Dana Walrath (Delacorte, 2014). Author sponsored. U.S. only.