If I’d read his bio before the interview, I might be a little bit intimidated.

Not only is Carey the author of two adult novels, Observatory Mansions and Alva and Irva: the Twins Who Saved a City, which have been translated into thirteen different languages, and both of which he illustrated, he is also a playwright with a long list of credits in England, Romania, Lithuania and Malaysia.

He has lived all over the world and currently makes his home in Austin with his wife Elizabeth McCracken and their two children and occasionally teaches creative writing and fairy tales at the Michener Center and the English Department at the University of Texas at Austin.

Gulp…Instead, I’m happily oblivious when Edward Carey bursts through the door of Sweetish Hill, hair blown back, red faced. I wonder if he’s driven here on a motorcycle.

Edward Carey: Parking. There’s no parking. I couldn’t find any parking. I had to run a great distance. I’m so sorry I’m late.

I assure him that six minutes past a meeting time in a town with too much traffic and not enough places to put cars is not late. In fact, my mother would argue, five minutes of lateness builds the anticipation of meeting someone. Particularly someone whose book I really loved.

Heap House is brilliant, original, inventive and unlike any book I’d ever read. The writing is smart and funny. The premise is ancient and fresh. 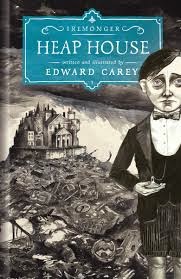 While Edward orders tea, I’ll share a brief description of the book:


Clod is an Iremonger. He lives in the Heaps, a vast sea of lost and discarded items collected from all over London.

At the centre is Heap House, a living maze of staircases and scurrying rats. Clod has an illness. He can hear the objects whispering. His birth object, a universal bath plug, says ‘James Henry’, A storm is brewing over Heap House.

When Clod meets Lucy Pennant, a girl newly arrived from the city, everything changes. The secrets that bind Heap House together begin to unravel to reveal a dark truth that threatens to destroy Clod’s world.

Already, it has received starred reviews from Publisher’s Weekly and Kirkus Reviews.

L2: Can you give me a one sentence description on Heap House?

EC: It’s a coming of age love story set in the rubbish heaps of Victorian London.

L2: So how did you come to write Heap House?

EC: I love Dickens. I love illustrations. I love kids books. I love Robert Louis Stevenson. I love books with a sense of adventure.

L2: Okay. But why Heap House? What was the inspiration?

EC: Well, there was this museum outside Bejing. I can’t remember the name of it. And when I went in there, they had rooms full of things.

And it seemed to me all these objects put together were somehow communicating with each other.

EC: Well, that’s what it seemed like to me. A 14th century tub talking to 19th century tub. They were going on and on.

L2: And that visit led to a book about objects that talked?

EC: It started me thinking about it. In Victorian England, during the height of Britain’s Empire, there was also an horrendous amount of poverty and neglect, and poor people were just crushed under the weight of industry. There were massive amounts of poor people and children were left at orphanages with one object from their families.

There’s a place in London called the Foundling Hospital (now it’s a museum) and sometimes when the mother anonymously left her baby there in the night, she’d leave a small object behind with it, a thimble say or a button or the metal label from a gin bottle, and this would be all that was afterwards to give any hint of where the child came from.

Can you imagine? Your mother is so poor she can’t keep you and she leaves you at an orphanage with one object. What tremendous power these singular objects have.

L2: Ahh, I’m beginning to see the heft and history of the objects in Heap House and their relation to people. But at Heap House you have massive heaps of things and rubbish not just the characters’ birth objects.

EC: Right. That’s what we spend our whole lives doing. Consuming and spending and acquiring and what happens when we don’t look after those things? We throw them away.

And what happens when we die? Those objects, those precious things get orphaned and thrown into the rubbish.

L2: How did Clod start coming into focus amongst all the objects?

EC: I started drawing this odd, ill-faced child who looked slightly miserable and I wondered, Hmm, what do you have to say for yourself?

EC: All the time. But not all of them become characters. Clod did, because he looked so concerned about something. I gave him a bathplug for his object. It worked symbolically because a plug keeps things in or lets them out.

EC: I gave her a box of matches. Her name comes from Lucifer. When she comes into the house, she turns things up side down. Almost like a burning, a purifying or a transformation. So…matches.

L2:What would you like your birth object to be?

EC: I think a pencil sharpener would be quite nice.

Edward and I digress and talk about a few of the characters’ objects for a while. He tells me the Grandmother in Heap House gets quite nasty. She’s the one who chooses peoples birth objects and some of them aren’t very nice. Like one poor fellow gets a noose. Not a bright future for that character.

If you would like to have a birth object, you can go to Edward’s website (scroll to bottom) and you will be assigned one. Mine is named Joseph Cecil Tennant and appears to be a little stool.

I try to wheedle the details out of him about Book Two and Three.

EC: Book Two’s done. It will be out next October. I haven’t worked out Book Three. I’ve got tons of stuff but it’s not filled in. I like not entirely knowing what’s going to happen so I have the freedom to surprise myself.

L2: That’s what I loved about your writing. It surprises. Like this description:

Bornobby washed with some sort of scented soap so you could always smell him coming, but always there was an undersmell with him, as if a ghost of a fish was following him about, swimming in his air.

It’s the kind of writing that give other writers permission to write more boldly, more inventively.

L2: What writers give you permission to draw outside the lines, so to speak?

EC: Angela Carter. Leonora Carrington. Carson McCullers. Shirley Jackson. Patrick Ness. Neil Gaiman. That’s why I love to teach fairytales. Grimm, Hoffman, Andersen these are really dark stories. They are our original stories, Grimms’ tales are a primal source of fiction, which over time have often been sanitized. Originally there wasn’t a stepmother in Hansel and Gretel. It was the mother who sent the kids into the woods because there wasn’t enough food. I love those stories. There are always woods you can’t go into.

If you go into the darkness, what will happen? Death? Or Love?

I also love the Secret Garden, Rudyard Kipling, and J.M Barrie’s original Peter Pan. It has the greatest opening lines in children’s literature: “All children, save one, grow up.”

Or perhaps this first line:

“It really all began, all the terrible business that followed, on the day that my Aunt Rosamud’s door handle went missing.” –Beginning the narrative of Clod Iremonger

Lindsey graduated from Hampshire College with a BA in Theatre Arts-Playwriting and moved to Austin where she started writing plays like the award winning “The Miracle of Washing Dishes.”

Later, she worked at The Austin Chronicle and the Austin American-Statesman where she interviewed death row inmates, cops and wayward millionaires.

When she wasn’t writing, she trained as a boxer and promoted the first
all-women’s boxing event to raise money for the Austin Rape Crisis
Center.

Lindsey received an MFA in Writing for Children and Young Adults from Vermont College of Fine Arts in 2010. Her debut YA novel Evidence of Things Not Seen was released by FSG in September.