Mac: And hello, Cynsations readers. We have taken over the blog today.

Mac: We are using our power to just post this gchat we are having into the blog.

Mac: On a lot of days, because writing and illustrating books is lonely, Jon and I have gchat conversations, either in text or with the audio link thing. I don’t really know what to call it, or even how to use it. Jon is the one who always has to call me.

Jon: There’s a country song in there somewhere.

Mac: Anyway, while we were making Sam and Dave Dig a Hole (Candlewick, 2014), we were talking a lot.

Jon: Not so much anymore.

Mac: Anyway, those conversations had a big impact on the book we were making, especially this spread right here:

Jon: Right. So here we have Sam and Dave, and their dog. This part of the book is about them missing these things in the ground that they are digging for, and they’ve just made an unfortunate turn, and are about to make another.

Mac: The joke is funnier in the book.

Mac: Anyway, when Jon was doing sketches, we would already be on gchat talking about snacks and stuff, and then he would send the art over to me and we would talk about it.

Jon: Yes. This page and the next few pages started out as a visual joke that I liked, but wasn’t in the story that Mac had written.

Mac: Yeah, Jon sent me a picture where Sam and Dave split up and dig a circle around a big gem.

We can’t show you this picture—if you want to see it, you’ll have to stop reading Cynsations right now and head out to your independent bookstore, cash in hand. Hard sell.

Jon: Right. And I wasn’t even completely sold on it. I liked the joke, but I worried that Mac’s guys wouldn’t split up like this. They are good pals on a journey, and it seems like kind of a risky thing for them to choose to do.

Mac: And when I saw the image, I laughed. It was beautiful and funny, but I didn’t think Sam and Dave would want to split up.

I think then Jon and I sat and stared at that image for a while. The only sound was the chewing of our snacks.

Jon: and the occasional slurp because i had a drink, also

Jon: with a few breaks for more snacks

Mac: and talking about snacks

Dave, who tends to take the lead on this adventure, proposes the idea. Sam expresses trepidation. And Dave tries to reassure him. (But Dave is afraid too.)

Jon: Right. It was neat, because it shows them getting a little more committed to this thing, and willing to do things that make them uncomfortable, so the story kind of moved forward.

Mac: I think you learn a lot about both boys in this spread. They’re vulnerable, especially Dave.

I love Jon’s art here. He’s so good at facial expressions, of course, but he’s also a master of posing. I love Dave’s hand on Sam’s shoulder, that look in his eyes.

The art is telling you a lot about how the text should be read, as it should in a picture book.

Mac: (Cynsations readers might like to know that now Jon is just sitting, not writing anything, because he doesn’t know how to deal with compliments.)

Jon: i just broke out into a rash

Jon: It’s a fortunate end to have, illustrating a story like this, because the text gives all the emotion you could hope to have, and then if you put a guy very simply putting his arm on the other boy’s shoulder, you’re good to go.

I enjoy Mac’s praise, and will never discourage it, but these things are made much easier because the emotions are there and only need a really gentle implication in the picture.

Mac: Ultimately this ended up being one of my favorite spreads in the book—absolutely one of the most important—and it didn’t exist in the original manuscript.

We created the moment to support a drawing Jon just made up, which is on the next page, and which we’re not allowed to show you, so run don’t walk to your favorite bookstore and grab a copy of Sam and Dave Dig a Hole!

How was that for a big finish?

Jon: Thanks everybody! Come see us on tour! Bring snacks! 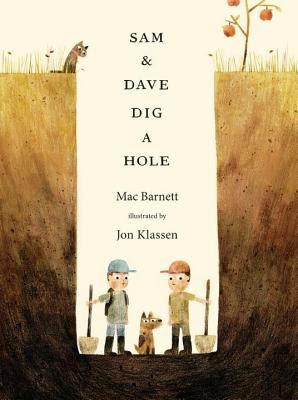 Sam and Dave are on a mission. A mission to find something spectacular. So they dig a hole. And they keep digging. And they find . . . nothing.

Yet the day turns out to be pretty spectacular after all.

Attentive readers will be rewarded with a rare treasure in this witty story of looking for the extraordinary — and finding it in a manner you’d never expect.


With perfect pacing, the multi-award-winning, New York Times best-selling team of Mac Barnett and Jon Klassen dig down for a deadpan tale full of visual humor.