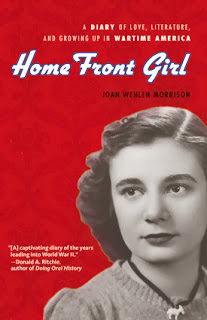 Susan Signe Morrison is the first-time editor of Home Front Girl: A Diary of Love, Literature, and Growing Up in Wartime America by Joan Wehlen Morrison (Chicago Review Press, 2012)(author blog and facebook page). From the promotional copy:

This diary of a smart, astute, and funny teenager provides a fascinating record of what an everyday American girl felt and thought during the Depression and the lead-up to World War II.

Included are Joan’s charming doodles of her latest dress or haircut reflective of the era. Home Front Girl is not only an entertaining and delightful read but an important primary source—a vivid account of a real American girl’s lived experiences.

My book is nonfiction. I found the diaries of my mother, the oral historian Joan Wehlen Morrison, in a file cabinet after her death in 2010. The diaries she wrote as a teenager, ages 14-20, from the year 1937 through 1943, just before she married my dad, Robert Thornton Morrison.

Some of the volumes of diaries are missing; three of the original six still exist. The missing ones must have been lost during the war years when my folks traveled many times when my dad was in the Navy.

My mom, Joan, always told us she had kept a diary. She even told us where it was and wanted to get a hold of it. But my dad was also a writer and there were all sorts of papers and junk in front of the file cabinet. After they died after 66 years of marriage within two months of each other, my brothers and I had to clean out and sell our family home. There, just as Joan had said, were the diaries!

So the following year, as I grieved for my parents, I read and re-read the diaries. I decided to transcribe sections of them as a family project (and therapy for me).

But at a certain point in the transcription, I realized these diaries were important. They were a unique source for those studying World War II, teenagers in the pre-war and war years, feminist historians, and others.

So I sought out a publisher. I’m a professor of medieval literature at Texas State University and have published scholarly books and articles. But this book was different. 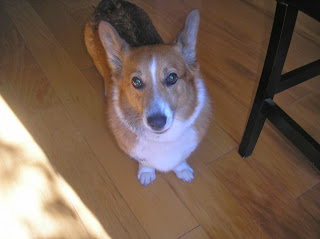 At first I sent it to the presses I knew: university presses. But they were not quite right. One company published war diaries, but soldiers’ diaries. My mom’s book got very nice rejections (believe me, I know rejections—these were personal!), but I just hadn’t found the right publisher.

Then—I did: Chicago Review Press that specializes in young adult nonfiction. I heard from the editor in early November 2011. The Tuesday before Thanksgiving 2011 she proposed it to her board and they were all enthusiastic. Home Front Girl was out by November 1, 2012.

As for roadblocks, there were really none. Occasionally I couldn’t make out my mom’s handwriting, though generally it was pretty good. I would enlist my husband—sometimes even my kids—to help me figure out a word or two. But mainly it was fascinating and so emotionally wonderful to reconstruct her teen years. I used about 2/5 of the material I found and am now working on an edition of her poetry.

I’m also working on a second book for Chicago Review Press: a young adult history of women in the Middle Ages!

Clearly my inspiration was totally personal. I was truly blessed that my mom had left me this gift after she died. It fascinated – and consoled – me because the writer of the diaries is my mom. To see how a girl – a very smart girl, who reads a lot, is witty, self-ironic, and philosophical– perceives the political situation as war is brewing in Europe is totally riveting.

Diaries exist written by girls in Europe from that time period, but I never knew of one from the U.S. home front perspective. It adds something to the historical record. And the fact that Joan becomes a historian in later life makes her writing even more resonant.

My mom had the same sense of humor she had as an older woman. She had the same anti-war stance (one of her oral histories is about Vietnam). You can see her books here: http://homefrontgirldiary.com/joans-other-books/


Mr. Lucas thinks I’m a communist. Today in Study, you see, Ruth and I were—well—you know—doing Latin together. Which isn’t approved of.

Then Alice asked me what onomatopoeia is and, while I was explaining, Mr. L. came over and said, “Can’t you work by yourself?” to me. “Are you helping these girls or are they helping you?”

And I said, “Well, it’s sort of community work, you see.”

And he said, “Well, you know we can’t have a lot of little communities in study hall.” And I said, thinking of Latin, “No, but why not one big community.”

I guess he must have thought I was a communist then, ’cause he looked sort of frightened and said we’d better work alone.

And I said, “Uh-huh.” And that was that. Once before he made me (and Ruth) stand in the corner for community work—me the socialist! And I had my red sweater on, too!

I wanted young readers (it’s geared for 12 & up) to read it. First of all, to see the importance of keeping a diary—for getting into the daily habit of writing even when it seems like “nothing” is happening.

Often you can have your most profound insights on days devoid of action when you are just thinking and daydreaming.

I kept to the following themes: the war and politics; romance (plenty of “necking”!); nature; speculations about the meaning of life and God; literary musings; and just beautifully written passages.

It’s amazing what kids read back then—very difficult novels. After all, there was radio, but no television or internet to take up one’s time. And Joan went to the movies a lot. The book also has her doodles she drew in the corners of her pages, so they are especially cute to see.

And I’m thrilled it’s been named by the Children’s Book Committee of the Bank Street College of Education to the Best Children’s Book of the Year 2013 list (Memoir: Ages 14-up).

Susan says: “In my blog, I try to include entries that link to a current event or issue, such as in this post that was one of the featured “Freshly Pressed” posts on WordPress.