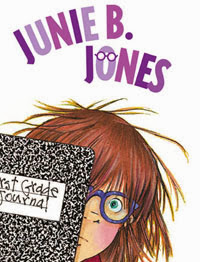 Junie B. Jones Creator Barbara Park Dies at 66 from Publishers Weekly. Peek: “Children’s author Barbara Park, long appreciated for her stories that blend humor and heart, and best-known as the creator of irrepressible kindergartner Junie B. Jones, died on Friday, November 15, after a long battle with ovarian cancer.”

“I’ve never been sure whether Junie B.’s fans love her in spite of her imperfections…or because of them. But either way, she’s gone out into the world and made more friends than I ever dreamed possible.”

More from Random House: “Barbara Park is also the author of award-winning
middle-grade novels and bestselling picture books, including The Graduation of Jake Moon, Mick Harte Was Here, Skinnybones, and MA! There’s Nothing to Do Here!: A Word from Your Baby in Waiting.”

See also from CBS News: “Park helped found a charitable organization, Sisters in Survival, to raise money women with ovarian cancer. Random House announced that contributions can be made to www.sistersinsurvival.org.”