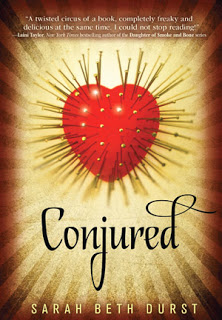 My new YA novel Conjured (Bloomsbury, 2013) is the darkest novel I’ve ever written. I worked hard to create an atmosphere of disorientation and ominous chaos.

It’s about a girl in the paranormal witness protection program, who, haunted by visions of carnival tents and tarot cards, must remember her past and why she has strange abilities before a magic-wielding serial killer hunts her down. Bad stuff happens. And lots of bad stuff almost happens.

And I also have conversations about bacon:

“Because my wife — you know, the doctor with the fancy degree — demands that I cut out all stress from my life,” Lou said.

Listening to his voice, Eve began to shake. She knew his voice. Oh, yes, she knew it deep, the way she knew the pulse in her veins and the breath in her lungs. “Already cut out red meat, red wine, sausage, and bacon. And you know how I feel about bacon. There’s no other food with a scent more perfectly designed to trigger the appetite than bacon. You could pump the smell of bacon into a room full of vegetarians after a veggie-burger-eating contest, and every one of them would crave cooked pig before the end of an hour. So explain to me exactly why you are rendering my no-bacon sacrifice moot by giving me an aneurysm.”

As she listens to Lou, Eve is remembering the painful involuntary surgery that he ordered. Her entire body was reconstructed without her consent. (Or if she did consent, she doesn’t remember it. She doesn’t remember much of anything, actually.)

The idea was to make her memories feel scarier because of the contrast with the dialogue.

And that’s the part I feel strongly about: that contrast. Darkness is meaningless without light. 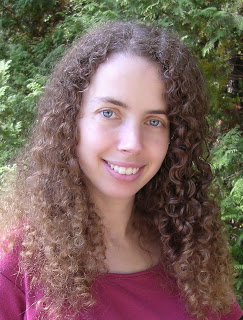 Of course, you can write a novel that is unrelentingly dark, wherein everyone is serious or angsting or in pain all the time, because life is nasty, brutish, and short. There are plenty of revered and wonderful novels like that. And if that’s your worldview, then that’s what you should write.

But from a sheer writerly technical standpoint, lightness — be it kindness, happiness, humor, even anger disguised as humor — can be a powerful tool. It can add meaning to the dark. It can increase the reader’s emotional investment. It can be used to deflect, defuse, and disarm, to charm and seduce, or to belittle and crush. It can be used to hide and to reveal.

This might not work for everyone (every writer’s process is different), but for me, I always plan for one draft to be the de-snarking draft. My natural inclination is to throw in lots of snark and non sequiturs, but that doesn’t always fit the tone of the story. So I do one pass through the novel where all I do is tweak the levels of light and dark. I think of it like adjusting whatever all those dials and buttons are on a sound board.

What kind of balance you want differs from writer to writer and from novel to novel. But I think it’s worth it to spend some time adjusting those dials and buttons…even if it makes you hungry for bacon.

Read an excerpt of Conjured by Sarah Beth Durst (Bloomsbury, 2013).