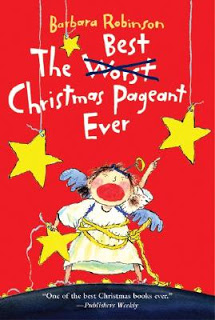 Obituary: Barbara Robinson by Shannon Maughan from Publishers Weekly. Peek: “Robinson followed her passion for both drama and writing when she attended Allegheny College in Pennsylvania. She graduated in 1948…. Robinson was a Breadloaf Fellow in 1962 and wrote more than 40 short stories for newspapers and magazines, including McCall’s and Ladies’ Home Journal. In 1962, she published her first book for children, Across from Indian Shore (Lothrop).

Barbara Robinson, Children’s Book Author, Dies at 85 by William Yardley from The New York Times. Peek: “She was born Barbara Jean Webb on Oct. 24, 1927, in Portsmouth, Ohio. She was an only child. Her father, Theodore, died when she was 3. She was raised by her mother, Grace, who taught school, and she grew up surrounded by an extended family of cousins, aunts and uncles. Mrs. Robinson wrote poems from an early age and earned a bachelor’s degree in theater at Allegheny College.”