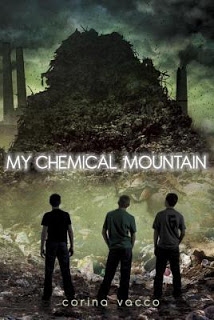 Corina Vacco is the first-time author of My Chemical Mountain (Delacorte, 2013)(author blog). From the promotional copy:

Rocked by his father’s recent death and his mother’s sudden compulsion to overeat, Jason lashes out by breaking into the abandoned mills and factories that plague his run-down town.

Always by his side are his two best friends, Charlie, a fearless thrill junkie, and Cornpup, a geek inventor whose back is covered with cysts. The boys rage against the noxious pollution that suffocates their town and despise those responsible for it; at the same time, they embrace the danger of their industrial wasteland and boast about living on the edge.


Then one night the boys vandalize one of the mills. Jason makes a costly mistake—and unwittingly becomes a catalyst for change. In a town like his, change should be a good thing. There’s one problem: change is what Jason fears most of all.

My three main characters engage in a form of self-injury, like cutting, but not as universal. They’ve spent their entire lives in a dangerously-polluted town, and with no hope of relocating, they cope in extreme ways—swimming in (and sometimes swallowing) contaminated creek water, partying in the industrial yards, breaking into condemned factories, and digging for Freak Museum relics at the base of a radioactive landfill. 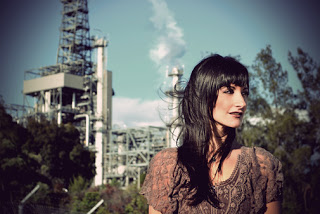 They’re not really trying to harm themselves; instead, they’re trying to infuse their lives with adrenaline rushes that sometimes feel like hope. And they’re raging against the pollution and those responsible.

When researching the real-life toxic neighborhood that inspired the setting for My Chemical Mountain, I interviewed people who’d grown up near the landfills. They told stories about playing in the toxic waste, how the soles of their shoes would melt, how they knew it was dangerous in some nebulous way (but mostly felt invincible), and how the consequences seemed to linger in the far off future.

I worried for these people, respected them. And I understood the complexities of their defense-mechanisms.

By embracing the pollution, by choosing it, they weren’t victims. By purposely cutting their hands open on sharp rocks, and by purposely climbing a decrepit grain elevator that might collapse, they were in control of what harm would befall them.

The challenge was writing about their edgy behavior in a way that truly represented the complexity of their motivations. I didn’t want the boys to be dismissed as thoughtless thrill-seekers. I wanted to be sure their secret fears, their underlying sadness, and a sense of unhinged anger came through.

When one of the boys takes his vigilante sense of justice too far, I wanted readers to understand that his actions were violent and generous. He, more than any of the others, boasted about living on the edge…and later we find out, he was terrified.

My characters make some very bad decisions, but they are not fools. They are deeply human.

It seems when authors write about edgy language and behavior, naysayers come out of the woodwork to warn us—if your characters swear, you’ll be banned from school libraries! If your characters set bad examples, you won’t win any awards! If you depict serious violence, it’s going to look like you condone it!—but I don’t think we should write to please the naysayers.

I think we should write only for young adults, a readership that doesn’t cower from the edgy.

Still, there are challenges. An edgy setting can be difficult. I wondered how to write about toxicity and danger in a way that wasn’t just ugly.

One of my favorite authors, Laurie Halse Anderson, is a master of this. Learning from her work, I decided to temper the disturbing images with lyrical language, which makes for an interesting contrast.

I used a similar technique with my characters. Yes, they do things that are shocking and terrifying and dark and inexplicable, but at the same time, they are strong and vulnerable and brave and loyal. I really had no choice but to let them tell their stories with raw honesty, and I’m so glad I did. I think we, as writers, owe this to our characters and our readers.


As a contemporary fiction writer, how did you find the voice of your first person protagonist? Did you do character exercises? Did you make an effort to listen to how young people talk? Did you simply free your inner kid or adolescent? And, if it seemed to come by magic, how would you suggest others tap into that power in their own writing?

Originally, I’d planned to tell this story in third person. I was finishing up the tail end of my landfill research, organizing all the interviews and newspaper clippings, but my intuition told me to hold off on writing the actual story.

I was still living in Western New York, and had just heard that local officials were hosting a town meeting to discuss one of the controversial (and contaminated) landfills at the edge of a residential neighborhood. I had something to say on the matter, so I attended the meeting with a friend of mine who lived so close to the landfill she’d actually received an official letter advising her not to eat vegetables out of her garden or dig holes below a certain depth.

The meeting floored me. I’ll never forget the concerns voiced that night—I was especially moved by a teacher who worked at an elementary school adjacent to the landfill, how concerned she was for her students—and I’ll never forget how it didn’t matter.

The landfill was declared safe. No remediation would be done. Ever. It was over.

At that moment, I realized, even though I would be moving back to Florida soon, Western New York would always be a part of me. I cared deeply about its well-being. The pollution felt personal.

A few days later I was walking my dog through Buffalo’s Elmwood Art District when my main character’s voice, Jason’s voice, spoke up in my head. He just ambushed me. I’d heard other writers talk about this happening, so I knew what to do: I started asking him questions.

After that initial Q&A, I couldn’t shut him up. His anger sometimes woke me in the middle of the night. He was intrusive. Writing in third person suddenly seemed highly inappropriate, like I would’ve been needlessly filtering him. So I sat down to write in first person, and Jason told his story.

I guess it was a sort of magic spell. The moment the story wasn’t just something I wanted to write, but something I needed to write, the moment I ached for Jason’s future and the future of his hometown, that’s when he appeared.

I think a great way to tap into that magic is to worry about your character, and I mean really worry. From there, put your pen to paper and listen quietly.

One thought on “New Voice: Corina Vacco on My Chemical Mountain”