When Lexy takes on the task of teaching a gaggle of giants to dance, well, you can expect one giant dance party.

Of course it doesn’t start out that way. But as Lexy and her giants prove . . . where there is a will, there is a way.


Absolutely anyone can dance.


And everyone in this book does!​

What is it like, to be a debut author in 2013? What do you love about it? What are the challenges? What came as the biggest surprise? In each case, why? 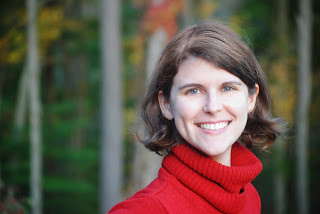 I think now is a particularly fascinating time to debut a book for kids. As a reviewer I’ve watched the debuts roll in each and every season. Some folks are immediately plucked from the mass and remembered decades after the initial printing. But a great swath of titles just sorta sink into the morass.

That said, that’s not really a debut author’s immediate concern. Longevity would be nice but immediacy takes precedent. You need sales now now now! It may be nice to think of your book as the great lost gem of literature, but it’s small potatoes when compared to the thought that your baby might end up pulped if you don’t do a good enough job of promoting it.

So what I both love and hate about our era is that it’s all on the creators to a certain extent. Unless you are a celebrity of one sort or another, promoting your little book rests wholly on your own shoulders. If you’ve ample time to spare, you can actually whip up some pretty cool ideas. 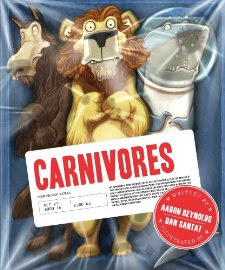 Folks like Jarrett Krosoczka or Dan Santat kill with their book trailers and videos. Amy Krouse Rosenthal brings self-promotion to another level entirely.

The trick then is how to distinguish yourself from the pack and, at the same time, not lose your sanity. A lot of folks have daytime jobs and haven’t the man hours to go whole hog on talking up their latest, but everyone has a little time in a day. There are a million things you can do.

Coming into it, I had been watching debut artists go at it for years. Clever promotional ideas at book signings have caught my eye, including the lemonade stand conjured up for The Lemonade War by Jacqueline Davies (Houghton Mifflin Harcourt, 2009) and the mix-CDs handed out at book signings for the wonderful The Order of Odd-Fish by James Kennedy (Random House, 2008).

But there’s a world of difference between watching someone do something clever and coming up with your own schtick. Fortunately my book had a lot to give. There are giants that are big and blue and furry. And there is dancing. Right there you’ve something you can build on.

I understood that I should create my own Teacher’s Guides (I have the background). I was even able to come up with a way of adapting my book to the Common Core. But Pinterest?

In spite of the cords and wires that seem to emanate from my skull, I’m actually not an early adopter. I’ve never taken an Instagram photo. I have no Tumblr. And until recently Pinterest was just a wild racy wilderness.

But what better way to draw attention to a book than to create a page for it there?

So it is that I’ve pinned every dance related or giant related picture book on there that I can think of. I’ve pinned great dances I’ve seen on YouTube (Harlem Shakes need not apply) and even clips of Betsey Bird, the infamous Muppet creation that was the #1 Google hit for my name for years. Never would I have suspected that putting out a book in the 21st century required creating something along these lines.

I think in the end that what I love about being a debut author is also what I find the most challenging. It’s taking these rough media tools and seeing what might work for my book.

Whether it’s producing a YouTube video series of wacky dances or simply creating an Author page on Amazon.com, there’s no magic recipe for making your book ubiquitous and memorable.

You’re just throwing as many darts as you can get your hands on at an enormous board and hope to high heaven that something, somewhere sticks. 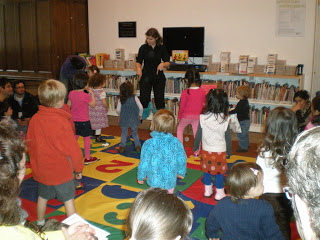 Do you believe that it’s possible to have too much information at your fingertips?

Librarians are both blessed and cursed with a vast knowledge of topics in the field. So anytime I find myself with a good picture book idea, I immediately try to figure out if it’s been done before.

Now there is no go-to search engine for every English language picture book produced in the last 100 years. Most of what’s come out has already long since been forgotten. But what about those books that came out since the birth of the internet? What happens when it turns out that your book has elements similar to their own? 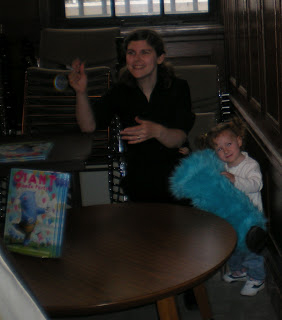 So a librarian-author has the potential to psych themselves out, researching endlessly, never really knowing for certain if their book has been “done” before. Fortunately, I’ve a pretty good memory for the last 10 years’ worth of books, so my research doesn’t need to accelerate to the next level. At a certain point you just need to let go.

Far more useful to me are the gifts that have been given to me as a children’s librarian that has worked with kids for years. Do enough storytimes and you develop an ear for cadence. For rhythm and language. You see what subjects do and do not work. You figure out how much to say, and where to scale back.

In the case of Giant Dance Party I wanted the words to be bouncy without having to rhyme (woe betide the ill-rhymed picture book). I wanted something you could read aloud to kids while also engaging them along the way. And most importantly I wanted that rare book that a kid actually enjoys and that an adult wouldn’t mind reading over and over again. Readability. That was my goal.

Now the thing they don’t tell you when you write a picture book, though I’m sure most folks suspect it, is that you fare better if you know how to present. This is not to say that there aren’t amazing and fantastic authors of picture books out there that are introverted shrinking violets (and for them I recommend the archives at Shrinking Violet Promotions). 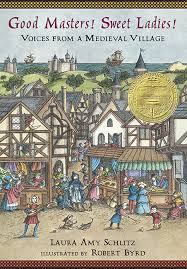 But if my time as a children’s librarian bestowed upon me any particular gift, it was the gift of presentation. I know how to keep a small child’s interest. Small children, for the record, are a tough crowd. If you’re boring, they will speak with their feet if you’re lucky, and loud skull-penetrating shrieks if you’re not. It took years of preschool storytimes, toddler times, and even baby lapsits to understand what a person has to do to sell a book.

Happily, I am now in a place where I could read my book to anyone between the ages of 3-8 and give them a heckuva show. That is a blessing, absolutely.

As of right now the librarian me and the author me work in tandem. We haven’t had any real conflicts. There may come a day where one has to make way for the other.

After all, as a full time Materials Specialist I have to use my Annual Leave whenever I want to take off for book promotion. But some of our greatest authors today remain librarians even as they write great titles for children (Newbery Award winner Laura Amy Schlitz comes to mind).

I think I’ll be able to keep up this duality for years. That’s the goal anyway.

How To Create a Giant Dance Party with Betsy Bird from The Page Turn. Peek: “Ms. Bird, a seasoned librarian who has put on many a storytime event, has kindly shared with us some great ideas for hosting a dance party in your library, classroom, or store that will get everyone moving and grooving.”