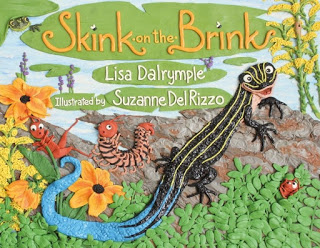 Suzanne Del Rizzo is the first-time illustrator of Skink on the Brink, written by Lisa Dalrymple (Fitzhenry & Whiteside, 2013). From the promotional copy:

Stewie is a very special skink — he has a beautiful blue tail which gives him a superpower against his enemies. Stewie loves singing his songs and rhymes as he dashes around his home.

But when he meets his new friend the woodpecker, Stewie comes to understand that changing is all a part of growing up and that there are still many things that make him a very special skink! 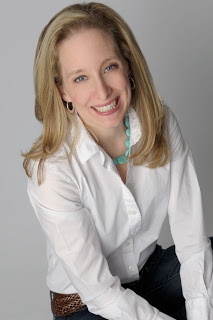 I am still pinching myself to be totally honest, that my first picture book, as an illustrator, debuted in May. Although my road to publication was initially quite circuitous, I feel like the last few years of focused effort helped me grow into my own as an illustrator.

But honestly nothing compares to the feeling of giddiness I felt when I got that magical call from Christie Harkin, children’s editor at Fitzhenry and Whiteside. My very first promo package just happened to cross her desk at just the right time. I was thrilled and eager and maybe a little terrified, all rolled up into one.

But like I said, I followed an unconventional path; I had always been artistic growing up, yet I decided to follow science in university and graduated with a BSc.H in Life Science. I worked in a medical research laboratory and created art as a hobby when time permitted.

But then I had a baby…and my perspective changed. Raising four kiddos as a stay-at-home mom was hectic yet fulfilling, but I realized that the fun I had creating art with kids, seeing the world through their eyes, was something I wanted to continue to explore, maybe in new profession like children’s book illustration.

I was especially drawn to books featuring dimensional illustrators, such as Jeanette Canyon, Kim Fernandes, Barbara Reid, and Susan Eaddy. I had worked with polymer clay and Plasticine for years in sculpture, but I was super excited to see this as a medium in picture book illustrations.

I worked on my portfolio for about two years and, in between naps and school pick-ups, found my own illustration style. During this time I also joined SCBWI and CANSCAIP, and set up a social media presence, joining LinkedIn, Twitter and Facebook, to get to know other illustrators and industry professionals.

I was very excited to make industry friends that were like me in so many ways–creative mommies following their passion. I also found this amazing website called zero2illo. Its creator, Jonathan Woodward, an illustrator himself, noticed a gap in the resources available to aspiring illustrators and set out to fill it. This website features fantastic resources, tutorials and next step guidance tips for aspiring illustrators. It provided the tools I needed to get my career plan in order and how to make it all happen. 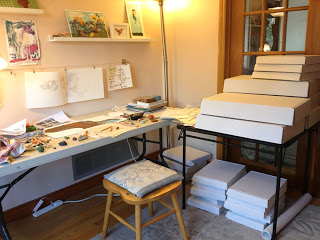 Once I felt my illustration samples were ready, I printed postcards, and created bookmarks, to include as a little take-away. I sent them out to the publishing houses that I felt were a good fit for my illustration style. And the stars aligned.

I got a call from Christie Harkin, children’s publisher at Fitzhenry and Whiteside after my very first massive postcard mailing. She liked my postcard but my little bookmarks caught her eye because she collects them–yay! My bookmarks made a difference.

She had a manuscript about a little skink that she felt would be a potential fit. I felt like I had won the lotto. I happy-danced around the house for days.

This year has been amazing. I have learned so much about the creation of picture books, and Christie has been so wonderful to answer my many questions. And because this book has curriculum tie-ins, Christie encouraged the author, Lisa Dalrymple, and myself to work together. I feel very blessed to have worked with an author on my debut picture book that was such a perfect fit. 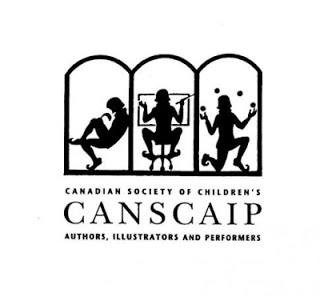 So as I eagerly anticipated the launch of Skink on the Brink, I was also busily dreaming up ideas for promotional materials like bookplates, colouring pages… and for sure some little bookmarks.

I have learned that much of the children’s book industry comes down to timing, and dedication.

There are many very talented illustrators and writers out there. Put in the time to stay on the pulse of the industry, stay current, attend SCBWI and CANSCAIP talks/conferences, and create, create, create. Don’t be afraid to experiment to grow as an artist, to further develop your individual style, and hone your craft.

Send out only your very best work, because it just might cross the desk of that dream editor or publishing house at the right moment when they just happen to have a manuscript that is the perfect fit- and the stars align.

As an illustrator, how do you go about interpreting someone else’s work? 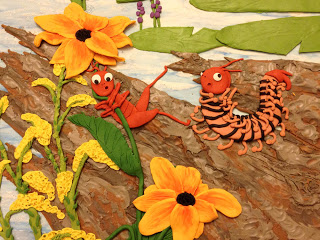 When I received that wonderful call from Christie Harkin, saying she’d like to work with me to illustrate Skink on the Brink, I was over the moon! My first picture book!

When I first heard the title, I have to admit, I hadn’t ever heard of a skink. But after discussing Stewie the skink’s storyline with Christie, I was very eager to read Lisa’s manuscript. Lisa’s story really resonated with me from the beginning. I was immediately smitten with Stewie, and had many great ideas popping into my head even as I read through it for the first time.

I let the story “bake in my noggin” for a few days, to give myself time to brainstorm in a stream of consciousness sort of way. I often find the best ideas come to you when you are just letting your thoughts flow, and not forcing it.

As a mom to four little ones, there are many times during the day that I can do this, whether it’s while I fold the laundry, make dinner, run errands or work-out, this thinking time is golden. I find it helpful to make lists of personality traits, like and dislikes, and quirks that would be fitting of the characters, based on the manuscript.

Once I had a few ideas I began character sketches. Personally, I like to use a lot of reference photos for my illustrations. I get my reference photos from a variety of sources; internet, nature magazines, and for Skink on the Brink I also took a ton of photos from my cottage, since it happens to be within one of the habitats for the five-lined skink.

Lisa also provided me with photos from her trips to Pinery Park where she actually got up close to a five-lined skink. Maybe it is the science/research side of me showing, but I am a stickler for accuracy in my details. To capture and portray them in Plasticine is a challenge I greatly enjoy. 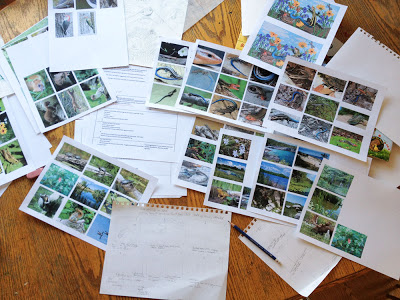 Skink on the Brink also had a cross-curricular component in the back matter. I tried my best to ensure that everything—from habitat, vegetation, and even background animals—was all accurate and easily recognizable. Kids are smart and ask tons of great questions, and I knew this book would serve as a jumping off point for many new questions. This research really helped me get to know Stewie—to understand his habitat, challenges with predators, adaptations etc. I was then able to come up with creative ways of showing these struggles and adaptations in an interesting visual way.

I loved the challenge of showing Stewie’s growth, both in size (by depicting him in relation to better-known animals like a hummingbird) as well as in coloration, which changes during maturation.

Early on, I also had an idea to create a secondary visual storyline involving a variety of secondary animal characters who join Stewie on his self-discovery journey. When I discussed this with my editor Christie, and Lisa, the author, I was thrilled that they were both open to it. 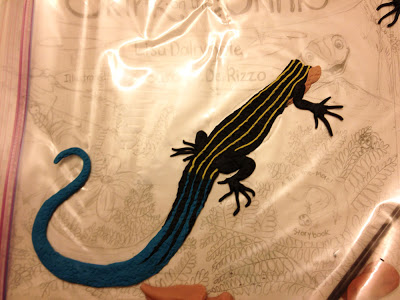 The brainstorming sessions with Christie and Lisa were so helpful because we all had a similar vision. The synergistic result, I feel, helped bring additional layers to the book which I hope will enrich the readers’ experience.