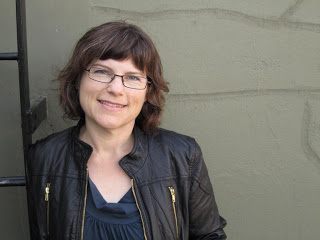 What is a metaphoric matrix?

A metaphoric matrix is a newly-coined term used to describe a
novel-length metaphor that supports and catalyzes a character’s growth.

In this series, we will be exploring how authors discover and craft metaphoric matrices in their novels.


Examples of metaphoric matrices include the tree that Melinda draws and visits in Laurie Halse Anderson‘s Speak and the tiger that Rob frees in Kate DiCamillo‘s The Tiger Rising.

Below, I interview Sara Zarr about how she discovered and developed the metaphoric matrix in Story of a Girl (Little Brown, 2007). From the promotional copy:

When she is caught in the backseat of a car with her older brother’s best friend–Deanna Lambert’s teenage life is changed forever. Struggling to overcome the lasting repercussions and the stifling role of “school slut,” she longs to escape a life defined by her past. With subtle grace, complicated wisdom and striking emotion, Story of a Girl reminds us of our human capacity for resilience, epiphany and redemption.

Spoiler Alert: this interview references some character and plot points.

In Story of a Girl, Deanna’s journey is paralleled by the story of a
surfer girl who paddled too far out that Deanna writes in her journal.
At what point in your writing process did this side story occur to you? 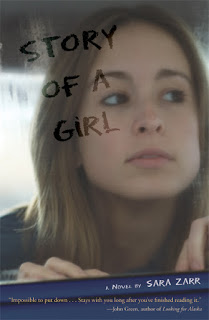 It’s a bit difficult to recall now, but I remember that somewhere along the line a reader (it may have been someone in my writing group, or an agent that read and ultimately rejected) saying that she wished Deanna had something of her own in the midst of all of the problems in her family and with friends that she was having to react to.

I’d already finished a couple of drafts of the book that didn’t have Deanna’s journal in it, so it was a matter of weaving that into the next rewrite.

Were you aware, when it occurred to you, how important it would be to Deanna’s journey, or did its importance come as a surprise to you?

The process of writing a book is such a long and mysterious thing.

When it’s done and published, all of its past iterations seems like a dream, and everything has a sense of “importance,” I guess, or at least inevitability. It feels nearly impossible at this point to remember the story without her journals, but I also don’t remember being surprised (or not surprised) by their importance. They just are.

Do you feel like writing these journal entries helped you better understand Deanna and her journey, or did they seem more like ways to express what you already knew about her?

I think it was a convergence of a lot of things. One was just trying other ways to get into Deanna’s head and into her vulnerability. She’s so tough toward everyone and even to herself in a lot of ways, though in fact she cares deeply. Her toughness is a survival skill, and trust is hard for her.

The journal entries were a way to show her tenderness and vulnerability and longing in a way she doesn’t feel safe doing with others. She hardly feels safe doing it for herself in the journal form – there’s that moment where reading the journal is too painful and causes her to berate herself for caring, trying, expressing. All of this was a way to deepen her character.

Another thing was the Philip Booth poem, “First Lesson”, that appears in the front of the book. A friend had given that to me during the time I was revising the book. I was personally moved by the idea of survival through surrender–“lie gently and wide to the light-year stars, lie back, and the sea will hold you.” That resonated with something my therapist was trying to get me to understand for myself around this same time period.

And at some point I wanted the girl in the story Deanna was writing to discover this, and in that process help Deanna discover it: that usually we can’t extract total justice or reconciliation from the painful situations we’re in, but people reach out and do their best and it is up to you to say, okay, this isn’t perfect and it doesn’t undo the pain, but I’m going to stop thrashing around and accept this friendship, this forgiveness, this apology, this family, this current version of myself, and trust that if I just relax and have some faith I’ll eventually be picked up by a passing boat or wash up onto the shore!

Once I understood it as Deanna telling a story about herself to herself, the purpose of the entries became more and more clear. We all do that–we’re crafting narratives about our various issues and experiences and trying to make sense of them in the context of the overall story of our lives.

I knew as I wrote that the journal would parallel Deanna’s inner goings-on but I didn’t want to hammer it. My editor helped me simplify and cut down on the entries so that it was enough without being too much.

What was one of the most satisfying or surprising moments you encountered in writing Story of a Girl?

I think the interactions between Tommy and Deanna later in the book were really satisfying to write. You don’t often get a chance to re-encounter your nemesis and get something like closure, but, of course, not closure, and I liked how Tommy became a real human and not just a bad guy.

I was surprised by this.


In your own life, have you ever connected so deeply with an object, an animal, or an activity (other than writing) that it provided you transformative experiences, such as those Deanna has?

Well, I’m not sure about that, but I do see metaphors in everything. I’m diabetic, and see a lot of metaphors in my rituals of insulin injection and record-keeping. I see metaphors in nature, and when I’m watching children interact, and of course in poetry and music and reality TV!

Do you have any advice for aspiring writers who are trying to learn to craft novel-length metaphors?

I don’t know if it’s something you should try to learn to do or be conscious of doing. I think it will come naturally if it’s right for the book, and the most important thing is probably cultivating a habit of attention so that you’re seeing these things in your own daily life and relationships, and just kind of viewing the world with the assumption that there is meaning to be found nearly everywhere. 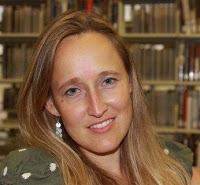 Elizabeth White is currently at work on a young adult novel about a teen
artist who discovers her own voice. She is a student at Vermont College of Fine Arts and has an M.F.A. in Poetry from Texas State University.

Her poems have been published online and in small journals, as well as
in two handmade poetry collections illustrated with her woodblock print
drawings.