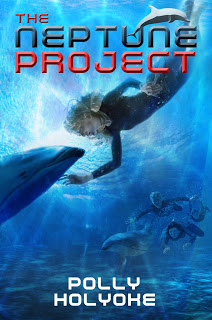 Polly Holyoke is the first-time author of The Neptune Project (Hyperion, 2013). From the promotional copy:


With her weak eyes and useless lungs that often leave her gasping for air, Nere feels more at home swimming with the dolphins her mother studies than she does hanging out with her classmates.

Nere has never understood why she is so much more comfortable and confident in the water than on land until the day she learns the shocking truth—she is one of a group of kids who have been genetically altered to survive in the ocean. These products of the “Neptune Project” are supposed to build a better future under the waves, safe from the terrible famines and wars and that rock the surface world.


But there some big challenges ahead of her: noone ever asked Nere if she wanted to be part of a science experiment; the other Neptune kids aren’t exactly the friendliest bunch, and in order to reach the safe haven of the new Neptune colony, Nere and her fellow mutates must swim across hundreds of miles of dangerous ocean, relying on their wits, their loyal dolphins and one another to evade terrifying undersea creatures and a government that will stop at nothing to capture the Neptune kids … dead or alive.


Fierce battle and daring escapes abound as Nere and her friend race to safety in this action-packed marine adventure.

I’ve been writing professionally for over twenty years now, and I do like to write in my little office (usually supervised by two lazy cats), but I can make myself write anywhere.

I’m also a big believer in the “bio-rhythms” of writing. Different people definitely have different times of day when they are most productive. Between 8 and 11 o’clock in the morning is my magic time when the words and phrases flow easily. Noon to two or so is a barren, frustrating desert, and then my creativity starts flowing again around three in the afternoon, just when I have to pick up my kids from school.

I knew a successful romance writer whose most productive time was literally from midnight to four or five in the morning. She lived a completely nocturnal lifestyle when she was on deadline, but luckily she was single and could cater to the whims of her personal bio-rhythms!

Most of us have jobs and family obligations which keep us from writing at our most productive time. But if you want to be a professional writer, you have to protect that time as best you can.

Sometimes you get stuck having to produce at a time of day when those creative juices don’t flow as easily, but if you’re a pro, you still put yourself in front of your computer at home, in the car, at the office cafeteria, or at your kid’s school gym between games and make the words come or, at the very least, get some useful revising done.

The Neptune Project takes place almost entirely in the sea, and one of my favorite compliments from a teen reader was, “I had no idea all that cool stuff was down there.”

There is lots of “cool stuff” in the ocean, and I went to great lengths to build an undersea world so vivid that my readers could see it, hear it, feel it, and taste it. 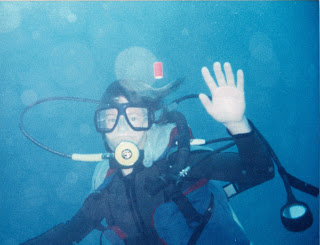 Fortunately, I’ve been a scuba diver for many years, and I was able to describe from personal experience the light and the visibility and the currents one often encounters beneath the waves. I went to the websites of dive companies which operate in waters I didn’t know, like the Vancouver Island area, and I studied their photos and read comments from their guests to collect more visceral details to convey what it’s like swimming around in such cold, dark waters.

Even though the entire premise of humans breathing water may seem preposterous to some, I wanted to make it seem as believable as possible. I had to do a ton of research and found out that what we can already do in terms of genetic engineering is both amazing and frightening.

We truly are on the brink of being able to create custom-designed children and genetically-enhanced super soldiers. Creating humans who can breathe in the sea isn’t preposterous at all.

Finally, I tried to tap into my own teen years and imagine what it would be like if I were fourteen and suddenly was forced to live in the ocean. What would I notice, what would astound me, and what would I miss from my life on land?

Effective world-building often comes back to the simplest details.

In one of my favorite scenes, my characters float in a circle eating their lunch of raw fish and kelp while they talk about the food from home that they miss, like ice cream and freshly-baked bread. I hope in that moment, my teen readers do realize how hard it is for my characters to have to live in this strange new undersea world for the rest of their lives.

One thought on “New Voice: Polly Holyoke on The Neptune Project”