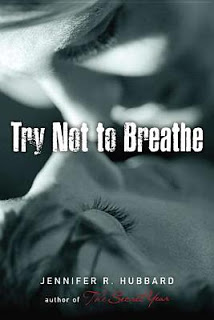 Enter to win a signed paperback copy of Try Not to Breathe by Jennifer R. Hubbard (Viking, 2013). From the promotional copy:

Learning to live is more than just choosing not to die, as sixteen-year-old Ryan discovers in the year following his suicide attempt. Despite his mother’s anxious hovering and the rumors at school, he’s trying to forget the darkness from which he has escaped. But it doesn’t help that he’s still hiding guilty secrets, or that he longs for a girl who may not return his feelings.

Then he befriends Nicki, who is using psychics to seek contact with her dead father. This unlikely friendship thaws Ryan to the point where he can face the worst in himself.

He and Nicki confide in one another the things they never thought they’d tell anyone—but their confessions are trickier than they seem, and the fallout tests the bound of friendship and forgiveness.

7 thoughts on “Giveaway: Try Not to Breathe by Jennifer R. Hubbard”