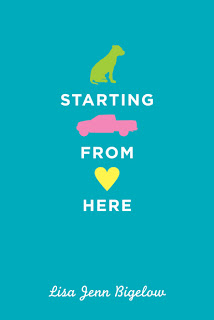 Lisa Jenn Bigelow is the first-time author of Starting From Here (Amazon Books, formerly Marshall Cavendish, 2012). From the promotional copy:

Sixteen-year-old Colby Bingham’s heart has been broken too many times. Her mother is dead, her truck driver father is always away, and her almost girlfriend just dumped her for a guy.

When an injured stray dog lands at her feet, she decides to care for it, against her better judgment. But new connections mean new opportunities for heartbreak.

Terrified of another loss, Colby bolts at the first sign of trouble, managing to alienate her best friend, her father, the cute girl pursuing her, and even her dog’s vet, who’s taken Colby under her wing.

Colby can’t start over, but can she learn how to move on? 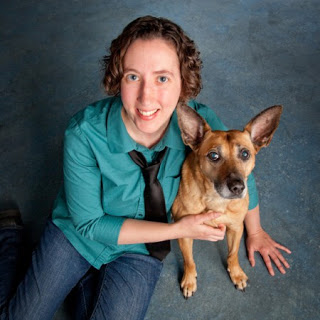 It takes a fair amount to make my “edgy detector” go off, so I have to remind myself that all readers have different sensibilities.

Personally, I don’t think of Starting from Here as particularly “edgy.” There’s no drinking or drugs, in large part due to Colby’s best friend Van, who identifies with straight edge punk culture and has a lot of influence in Colby’s life. The profanity is pretty spare, too, since I think a little goes a long way when it comes to establishing character and emotion.

What some readers are more likely to find a sticking point, unfortunately, is that so many of the characters fall on the LGBTQ spectrum. Colby’s closest friends belong to her school’s Gay/Straight Alliance, and while many of them are still exploring their identities, and not all of them are “out” to their families, they’re not ashamed or shy about who they are.

And they follow their hormones. There’s kissing, groping, clothing removal, and innuendo. There’s probably sex, but I’m not 100% sure, because that scene fades to black. I’ve been a little startled when readers bring up the sexual aspects of the book as dicey areas. Love and lust are so visceral and entwined that I can’t imagine writing a romantic relationship with no physical passion.

There was never any question of toning down Colby and her friends or making them straight. Like Colby, I grew up in a mid-size town in Southwest Michigan, which was and continues to be a pretty conservative area. In the early to mid 1990s, virtually nobody was “out” at school, which was very isolating. LGBTQ literary options geared toward teens were also very limited.

I didn’t get my hands on the groundbreaking lesbian YA novel Annie on My Mind, by Nancy Garden (FSG), until my senior year of high school, by which point I’d been grappling with my sexual identity for several years.

Almost twenty years later, so much has improved—in publishing and elsewhere. But queer characters are still such a tiny, underrepresented piece of the publishing pie. Authors who care about improving the sociopolitical climate for LGBTQ people owe it to the world to write more of them.

Some libraries may choose not to purchase Starting from Here and some readers may be uncomfortable with the book due to its LGBTQ content.

Then again, who knows? So far I’ve only heard remarks objecting to Colby’s dad leaving her alone so much—which to me says their priorities are in the right place.

Before my publishing contract, being surrounded by children’s books for eight hours a day was a double-edged sword. When I was frustrated, I’d think, “There are so many books here, some of them awful, so why does my good book keep getting rejected?” Other times, I’d think, “So many books, books for every kind of reader. Surely mine will find a home one day, too.” And, eventually, it did.

Interacting with readers is the biggest advantage to being a librarian as well as writer. I learn which books kids are seeking out—which books are popular, which books move them, which books are part of school curricula. On a daily basis, I see how books touch lives, which is an inspiring reminder of why writing is important.

Reading reviews and industry blogs and journals is another part of being a librarian, so I know what’s up and coming. I see new books before they’re put on the shelf.

I also have what I think is a realistic but healthy perspective on a book’s “success.” Schools and libraries collect a broader variety of books from all sizes of publisher than stores—especially big box stores—do. So while a less commercial book from a small press may not be stocked in stores or get big sales figures, if it gets good reviews, it will still find readers through schools and libraries.

Finally, working in a library—a public library, anyway—teaches me how ephemeral books are. My library is not an archive with an interest in preserving books indefinitely. It is a public browsing collection. We order books that get good reviews and/or that patrons ask for.

If they don’t circulate well after a few years, or if they get damaged beyond repair, we withdraw them. In doing so, we make shelf space for a new load of beautiful books.

It’s a natural part of the life cycle of a book.