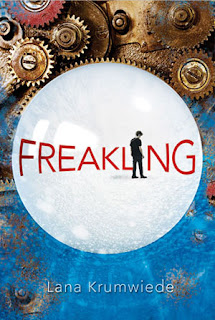 Lana Krumwiede is the first-time author of Freakling (Candlewick, 2012). From the promotional copy:

In twelve-year-old Taemon’s city, everyone has a power called psi — the ability to move and manipulate objects with their minds.

When Taemon loses his psi in a traumatic accident, he must hide his lack of power by any means possible.


But a humiliating incident at a sports tournament exposes his disability, and Taemon is exiled to the powerless colony. The “dud farm” is not what Taemon expected, though: people are kind and open, and they actually seem to enjoy using their hands to work and play and even comfort their children.


Taemon adjusts to his new life quickly, making friends and finding unconditional acceptance. But gradually he discovers that for all its openness, there are mysteries at the colony, too — dangerous secrets that would give unchecked power to psi wielders if discovered.


When Taemon unwittingly leaks one of these secrets, will he have the courage to repair the damage — even if it means returning to the city and facing the very people who exiled him?

A thrilling, fast-paced dystopian novel about the dangers of unchecked power and the dilemmas facing a boy torn between two ways of life.

My critique group has been a major player in the creation of Freakling. When I joined the group, I was writing short stories and poems for magazines. This was great training for me and I enjoyed it.

A few years later, I decided to tackle a novel and my group was were tremendously supportive. Without that encouragement, I’m not sure I would have finished.

As it was, it took me three years to write the book, which is a long time to sustain the kind of focus that novel writing requires. Their comments helped me find the story I needed to tell. Their enthusiasm motivated me through many setbacks.

About two years into the all this, I moved from Idaho to Virginia and immediately started looking for another group. After dozens of calls and emails, I discovered there was no in-person critique group for children’s writers in my area, so I started one.

Once again, they became a vital source of energy and motivation. I got myself stuck in this endless loop of feeling the manuscript wasn’t good enough and launching into another round of nit-picky revisions.

Polishing your manuscript is important, to be sure; but in this case, revision became a safe place for me. Finally, one of the members of the group pulled me aside and said, “You’re procrastinating. There’s no good reason not to start submitting.” And I knew he was right. I promised that I would submit before the next meeting.

Things happened fast after that. When the group met again, I had four agents that were considering the full manuscript. I signed with my amazing agent, Molly Jaffa of Folio Literary Management, a couple of weeks later.

My Virginia group has been together for three years now, and it just keeps getting better. Now we are helping each other with book promotion in addition to our critique sessions.

The idea for this story was rattling around in my head for some time before I finally tried to actually write the first chapter. I knew that I needed to understand psi, how it worked and what the limitations and rules were.

For that, I read a lot about the theories behind telekinesis—there are rational people who believe that it is theoretically possible—and even got on a few discussion boards to ask some questions. One or two people took the time to reply and that was extremely helpful.

After I had psi figured out (more or less), I started on the things that would affect a child’s life the most: school, family life, religion. But as I continued writing, I continually came to scenes where I needed more.

It was a tedious business—I won’t lie about that. I would write a little, and I’d come to a part where they needed to ride in a car. I’d have to shift from writing mode to world-building mode. What was the car like? Who drove it and how? What did the street signs look like?

Before I could write again, I’d work on that for a few days, jotting down notes, drawing pictures, a map of the city, and organizing all this in a binder. This happened many times with different topics—geography, commerce, food, clothing. The binder filled up quickly.

More than once, I had to go back and rewrite scenes to reflect the world building I was doing along the way. I wanted to show that psi had affected life so deeply that even the most basic, ordinary things had changed. At the same time, I wanted to show what hadn’t changed—kids still pushed the boundaries their parents provided, for example.

There’s another aspect that I call micro world-building; that is, the culture and traditions of that particular family. Taemon’s family is more religious than most others in his community, so their ways of doing things are slightly different. I needed to show that, too, a culture within a culture. Layers of world building.

It was a lot of work, but I absolutely loved it. One of the first things that people mention about Freakling is the world building, and that makes me happy.