CHRIS: If there’s one person who’s read Rootless almost as many times as I have, it’s my brilliant editor, Mallory Kass of Scholastic Press.

But Mallory didn’t just help make Rootless the best it could be, she also guided me along the “publication path”, answering my questions and advocating on my behalf. Whether it was the way the book reads, the cover design, the title itself, Mallory was involved every step of the way.

To me, one of the greatest things about Mallory is that she’s “chill” I’m pretty laid-back a lot of the time, but when it comes to something like copy-editing (to comma, or not to comma!), I can start going crazy over every tiny thing. Mallory is the calm in the storm, and makes for a great partner in crime.

The best thing of all about working with Mallory?

When we started to work on Rootless, she said her job was to make sure readers would most clearly experience my vision of the novel. Yeah! That’s Mallory Kass, for you! And here she is for our Book Blog Tour Exclusive Q&A!

CHRIS: We first met at the Big Sur Writing Workshop, and you were one of the first people to ever read the first chapter of Rootless. What was it that made you want to read more?

MALLORY: As an editor, I’m drawn to manuscripts with beautiful writing and sophisticated world-building. Rootless (then called “The Tree Catcher”) had all this on page 1. That great first line, “They figured me too young for a tree builder,” sucked me right into Banyan’s world. I immediately wanted to know: why does this guy need to build trees? Who is he working for?

Then, in addition to that initial burst of curiosity, I felt myself swept away by the elegance of your prose. The description of the tree tattoo juxtaposes the harsh reality of Banyan’s life so well, and gave me an immediate sense of his craving for beauty—one of the defining forces in the novel.

CHRIS: I was surprised during the editing process that Rootless actually got longer, rather than shorter. In fact, it kept getting longer and longer, and then we started cutting some things out! Is that typical? Do you usually encourage authors to expand on ideas and characters, before you start looking for places to trim down?

MALLORY: It depends on the manuscript. Because you’re such a thoughtful, economic writer, there really wasn’t much in the first draft that felt superfluous.

In other situations, it’s sometimes necessary to make cuts right away, to get at the heart of the story, and then think about where you want to build it out.

CHRIS: Do you have a favorite character in Rootless? Which one would you most like to share a bag of popcorn with?

MALLORY: Well, I adore Banyan, of course. But I think I’d probably choose to hang out with Alpha. Maybe she could show me the best way to rock a mohawk!

CHRIS: What’s your favorite thing about being an editor? And what do you think people would find most surprising about a day in the life of Mallory Kass?

MALLORY: One of my favorite things about being an editor is that feeling I mentioned above, when I read the first few pages of a manuscript and feel myself being pulled into another world as the beauty of the writing casts its spell.

I also love having the chance to be involved in every stage of the process, from working with authors, brainstorming with designers, coordinating with marketing, publicity, and sales, and then having the joy of seeing readers connect with the book just like I did!

I’m always a little surprised by how much fun I manage to have at the office! I have the privilege of working with an incredible group of intelligent, passionate people, and even though we’re all super busy, the atmosphere is always creative and playful.

CHRIS: What are some of your thoughts on the digital revolution happening in publishing? What do you think it means for authors, and publishers? And do you think physical books might disappear, as they have in Banyan’s world?

MALLORY: It’s a very exciting time to be in publishing! Scholastic has always been committed to providing fantastic stories for kids and teens, and we’re going to continue to that in whatever way works best for our readers, their parents, teachers, and librarians!

CHRIS: There was one line near the end of revisions, where you said, “what if Banyan said this ____?” and it was so perfectly in character, I just stuck the line right in there! If something terrible happened to me before I finished the trilogy, would you consider wrapping it up? No pressure or anything.

MALLORY: Oh, goodness. I’m flattered by your faith in me, but I don’t think anyone could bring Banyan, Alpha, Zee, Crow and the rest of your incredibly complex characters to life like you did. I think for the sake of your fans, you’ll just have to be very careful about looking both ways when you cross the street!

CHRIS: And now, the tables get turned, and it’s Mallory’s turn to ask me questions!

MALLORY: What surprised you the most about the editorial process?

CHRIS: Maybe I shouldn’t have been surprised, but the first time I visited the Scholastic offices in New York, I sort of imagined things being a bit stuffy and “strictly business”, but everyone was so passionate about their work and super busy, while being super friendly and fun at the same time. I felt like my book was way more than just a “product”, and that was a great feeling.

Because when you see this personal story you wrote become “eligible for free shipping” and things, it’s a strange feeling.

But then you meet people like the team at Scholastic, or booksellers, or readers, and you remember that people are in this world because of the magic of books.

MALLORY: If you could spend three months living and writing anywhere in the world, where would it be?

CHRIS: Anywhere there was no internet, no phone service, and plenty of trees to walk around in! How about Big Sur, California? Then I’d be by the ocean, too. And I could see Magnus Toren who runs the Henry Miller Memorial Library. He’s awesome!

MALLORY: In one my favorite recent movies, “Midnight in Paris,” the main character goes back in time and asks Hemingway to read his manuscript. If you could time travel, which writer would you ask to critique a novel you’re still working on?

CHRIS: I loved that movie, too! And it’d be tough to beat Hemingway, right? But I’m going with Mark Twain. I actually think Banyan and Huck Finn would get along well, and I think I’d have a blast hanging out with Mr. Twain. 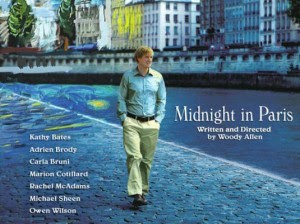 MALLORY: What’s the strangest habit you developed while writing?

CHRIS: The way I type is not something you would call normal It’s like my own weird version of hunting and pecking.

MALLORY: Which would you least want to write a complete novel without A) music B) caffeine C) a computer?

CHRIS: A good story is better than caffeine, right? And as much as I love music, I always write in silence. So… I’m going with a computer, as soulless as that sounds!

To be honest, my penmanship is so bad that even I can’t read it, so I really need that computer, I guess.

MALLORY: Which celebrity would you be most excited to have at a reading of Rootless?

CHRIS: I’m going with Bob Dylan. I love that guy. He’s amazing, and a big inspiration. His lyricism has had a big influence on my writing, and the idea of him hearing some of my prose would be too cool! Maybe I could get him to do the reading for me, or at least knock out a couple of tunes. 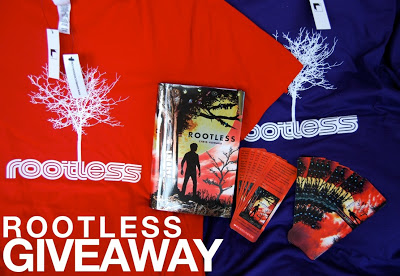 Enter to win a Rootless T-shirt and a signed, personalized copy of Rootless (Scholastic, 2012), and bookmarks. Eligibility: international. Deadline: Dec. 5. Note: Follow the rest of the Rootless tour for more chances to win Rootless swag.