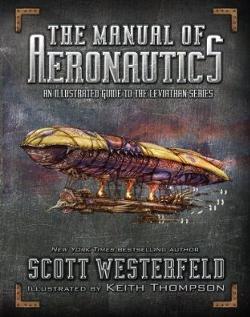 Teens and Dystopias from Scott Westerfeld. Peek: “Whatever teens embrace—whether it’s black hoodies, rap, texting, file-sharing, hoverboards, or fictional vampire boyfriends—is soon decried as a threat to civilization. And trust me, teenagers notice this adult discourse going on around them.”

Linette Kim: How I Got Into Publishing from CBC Diversity. Peek: “…a NYC transplant from California working in School & Library marketing at Bloomsbury Children’s Books.”

Stop Feeling Like a Wishbone at the Table of Industry Experts by Jan O’Hara from Writer Unboxed. Peek: “Good, diligent, and intelligent people can still have poor understanding of a situation because of flawed data, flawed understanding of causality, or imperfect application.”

Amazon Author Rankings and Who They Actually Benefit by John Scalzi from Whatever. Peek: “…some thoughts for people to consider when they look at these rankings.” Source: Gwenda Bond.

5 Ways for Writers to Overcome Self-Doubt by Jon Bard from WriteToDone. Peek: “…I’ve identified five ways that writers can overcome self-doubt and move ahead with confidence and joy.” Source: Janet S. Fox.

Learning to Let Go by Danyelle Leafty from QueryTracker.netBlog. Peek: “… the biggest step in letting go: when your book is in the hands of your readers.” 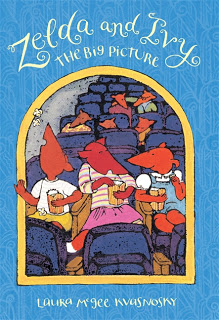 Begin Again by Laura McGee Kvasnosky from Books Around the Table. Peek: “I sift through clippings, cards and photos saved over the years and feel around for the stories that I saw in them.”

How to Get Publishers and Agents to Knock on Your Door by Alvina Ling from Blue Rose Girls. Peek: “…most agents and editors have reached out to a potential author or agent at some point, whether or not it turned into a book. Here are a few ways it can happen (note: this is for all books, not specifically children’s books)…”

Emotion Behind the Story from Stina Lindenblatt. Peek: “…how do you bring in emotion to add maximum power to your story?”

Writers and Depression by Nancy Etchemendy from Horror Writers Association. Peek: “The courage it takes to deal with rejections and keep going may fail us at times. Without courage, we become fair game for depression.” Note: I run this link periodically. Take care of yourself, and be good to each other.

The Sophomore Slump by Kristin Halbrook from YA Highway. Peek: “A number of factors go into that second book, all of which can
contribute to frustration and slumpiness, but which can also push a
writer to expand and explore the boundaries set by the first novel.”

Help Readers Suspend Disbelief and Avoid Plot Holes by Elizabeth S. Craig from Writing Mystery Is Murder. Peek: “The writers had an objective to accomplish. But once I fell into this plot hole, I couldn’t climb out of it…it bothered me that much.” See also Chapter Breaks and Cliffhangers by Elizabeth S. Craig
from Mystery Writing Is Murder. Peek: “…folks wanted shorter chapters
to accommodate their busy schedules and short amount of reading time.”

Harry Potter: Beyond the Page: A Virtual Author Visit with J.K. Rowling from Edinburgh, Scotland from the Harry Potter Reading Club. Source: KidsEBookBestsellers. 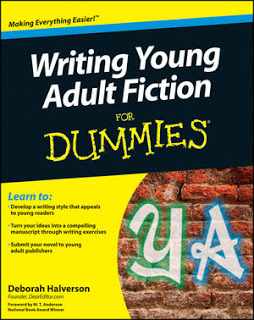 How to Query an Agent Who Has Already Rejected Your Manuscript by Deborah Halverson from DearEditor.com. Peek: “…the agent will probably recognize the project. I know agents and editors who can’t remember what they ate for dinner last night but who can remember details page-and-paragraph from a story they read years ago.”

The Seven Stages of Publishing Grief (Or Hello Darkness, My Old Friend) by Robin LaFevers from Writer Unboxed. Peek: “For while writing is one of the most rewarding pursuits in the world, publishing can be a long, slow, painful slog toward the pit of despair, and you can quickly find yourself in the soul sucking land of Major Disappointment.”

Gluing Plot to Theme and Character to Fuel Your Story by Martina from Adventures in YA and Children’s Publishing. Peek: “…theme must integrate tightly into plot and character, because otherwise there isn’t room for it. And without theme, there is no meaning to the plot.”

What to Expect When You’re Expecting an Editorial Letter by Tara Dairman from EMU’s Debuts. Peek: “Considering that you probably already rewrote and revised your
manuscript a bazillion times before signing with your agent, then again
before going on submission—and maybe again before it was acquired—you
might be under the false impression that it’s in pretty good shape.”

Booktalking 101: Make It Relevant! by Naomi Bates from YA Books & More. Peek: “…get audience participation by asking about something relevant going on
in news or culture that can connect teens to the books.  So here’s a
list of the books and the tie-in I found for each one.” 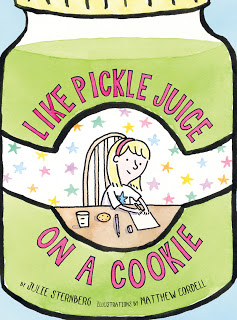 Cover Evolution of Like Pickle Juice on a Cookie by Julie Sternberg, illustrated by Matthew Cordell: Behind The Scenes With Creative Director Chad Beckerman from Abrams. Peek: “Our goal was to up the cuteness factor as well as remaining true to the story.”

Author Spots for Schools is seeking authors. Author Spots are free mini-commercials created by children’s authors that schools can broadcast to promote their book fair to kids and parents. From Jean Reidy: “Nothing fancy – just a 30 second to one minute webcam, YouTube video of a children’s author giving a shout-out about his/her books along with a personalized promotion for a school book fair.” Author Spots may be shown in morning video announcements, during library time, in the classrooms, at PTO meetings, at the school entrance, or loaded on the school’s website…the possibilities are endless. Authors, join here.

This week the Ontario Library Association announced the nominees for their Forest of Reading Awards.
The awards in each age category are named for a different Canadian
tree.  Winners will be chosen by child readers from participating
schools and announced in May 2013 at the Festival of Trees, Canada’s
largest children’s literary event. Note: Congratulations to Cynsations Canada reporter Lena Coakley, whose Witchlanders (Atheneum, 2011) is a White Pine Award nominee!

Why It’s Okay to Know Your Theme Before You Start Writing by Amy Rose Capetta from Crowe’s Nest. Peek: “I don’t mean the premise of the novel. I don’t mean the beginning or the ending or even what the main character wants. I mean what it is ABOUT. Capital ABOUT.” 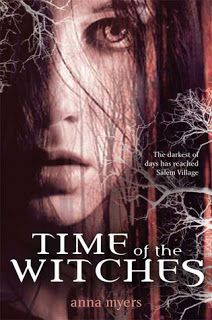 The winner of a signed copy of Forget Me Not by Carolee Dean (Simon Pulse, Oct. 2012) is Simone in New Jersey, the winners of The Infects by Sean Beaudoin (Candlewick, 2012)(YA) are Lauren in North Carolina, Carl in Arizona, and Deena in New York, and the winners of On the Road to Mr. Mineo by Barbara O’Connor (FSG, 2012)(MG) are Holly in Ohio and Kayla in Louisiana.

For those who missed it, here’s a peek at the trailer of Chronal Engine by Greg Leitich Smith (Clarion, 2012); trailer produced by Owen Ziegler. 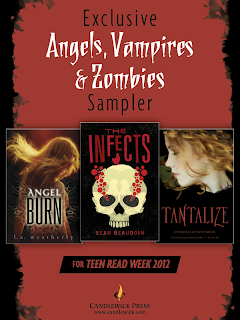 Happy Teen Read Week! My publisher, Candlewick Press, is offering three free fiction samplers to celebrate. The highlighted books include my own Tantalize
(Book One in the Tantalize series). If you’d like to get a taste of the
series or if you missed the first installment, don’t miss this chance!

Wow! I’ve reached 10,000+ followers on Twitter @CynLeitichSmith. If you haven’t already (and don’t get enough of me here), please feel free to join in the conversation.

Thank you to Dr. Kurtz and her students at Minot State University for a terrific conference call chat about graphic novels! Check out more resources on Tantalize: Kieren’s Story (Candlewick, 2011).

Thank you to Jennifer Ziegler and co-panelists Jo Whittemore, Ernie Cline, and Jennifer Hill Robenalt for a great conversation on author PR and marketing at the Writers’ League of Texas monthly meeting at BookPeople!

Oct. 20 is the National Day on Writing! Tweet #WhatIWrite on Oct. 19, and listen to my audio statement!

If you missed it, take a look at Greg’s trailer for Chronal Engine.  It was created by Owen Ziegler, teenage son of Austin YA author Jennifer Ziegler. Please leave a comment cheering Owen for his efforts and encouraging him as he continues his creative efforts into the future.