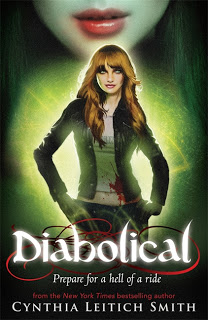 Prepare for a Hell of a Ride

Diabolical, the fourth prose novel in the Tantalize series, is now available from Walker Books in the U.K. (It was released in the U.S. and Australia/New Zealand last winter.)

In addition, free downloads of two short stories set in the universe, “Cat Calls” and “Haunted Love” are available from major book etailers.

Check out curriculum tie-ins for the Tantalize series, developed by the Texas Library Association. Highlights include Vote for Your Favorite Character, an Evening at Sanguini’s and Origins of Our Myths.

You can purchase the U.K. edition or the U.S. edition from Book Depository and receive free shipping around the world or you can buy an autographed copy from my local independent bookstore, BookPeople of Austin, Texas (there will be a shipping fee).

“…this captivating story combines action, suspense, and romance
with just the right touch of humor to keep it entertaining. A great
finish to an original and satisfying series.” —School Library Journal

“It’s a considerable challenge for a series not to lose steam by
the fourth book, but this one runs full force on the fires of hell and
the sword power of heaven.”—The Horn Book