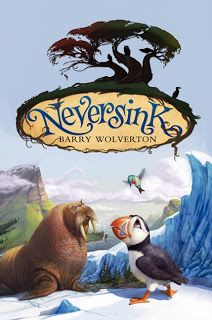 Barry Wolverton is the first-time author of Neversink (Walden Pond, 2012). From the promotional copy:

Along the Arctic Circle lies a small island called Neversink, whose jagged cliffs and ice-gouged rocks are home to a colony of odd-looking seabirds called auks, including one Lockley J. Puffin.

With their oceanfront views and plentiful supply of fish, the auks have few concerns – few, save for Lockley’s two best friends, Egbert and Ruby, a know-it-all walrus and a sharp-tongued hummingbird.

But all of this is about to change. Rozbell, the newly crowned king of Owl Parliament, is dealing with a famine on the mainland of Tytonia – and he has long had his scheming eyes on the small colony to the north.

Now, Neversink’s independence hangs in the balance. An insurgence of owls will inevitably destroy life as the auks know it – unless Lockley can do something about it.

I signed with my agent in the summer of 2006, and we didn’t sell the book until April 2010. So while I had my coping-with-rejection routine down pat, I was completely unprepared for success.

2006 was also the year my mother was diagnosed with lung cancer and given three-to-six months to live. It was because of my mom that I was always put to bed with a story when I was a child, and grew up in a house full of books, even though she almost never had time to sit down to read for pleasure.

Needless to say, when she was diagnosed, I never thought she’d live long enough to see me sell a book. But being the indomitable person that she was, she kept fighting and defying her doctor’s expectations, which made it that much more frustrating when I kept coming up short with Neversink.

When Walden Pond Press decided to take the book to acquisitions, all I needed was a two-page synopsis to go with a revised first act I had written for them.

Unfortunately, writing a good synopsis proved so painful that I missed the deadline for the March 2010 meeting where Neversink was supposed to be on the agenda. I had no idea what that meant — whether it would be another week or month or quarter before I had my shot.

But on April 9, 2010, which was Good Friday, I was about to get in the car and drive to my parents’ house for Easter. I compulsively checked my email before leaving, even though I knew my agent was on vacation.

But there it was. An email from her, from New Zealand, saying we’d sold Neversink. So I celebrated by getting to tell my mom the good news in person.

She also got to show off the Publishers Weekly announcement a couple of months later, which made her very proud. She wanted so badly to hang on until the book came out, but she didn’t quite make it.

Story by Robert McKee (It Books, 1997). I am a formerly aspiring/currently failed screenwriter, and though this book is focused on screenwriting, McKee’s dissection of story and structure, down to individual scenes and story “beats,” helped me enormously as a fiction writer. Also, I had tried in my 20s to write an adult novel and never finished.

Writing several screenplays, which are much more compact and formulaic that the typical novel, gave me confidence that I could finish something and also helped me learn to use description and dialogue more evocatively.

My world came together through different small landmasses bumping into each other. There was my visit to the Baltimore aquarium’s auk exhibit where I got to see these amazing birds in action and wonder why penguins got all the love. There was my fascination with animal collective nouns, like a “parliament” of owls and a “colony” of puffins, which suggested a political allegory waiting to be told. And the natural habitat of Atlantic auks (Iceland and Great Britain, among others) played right into my love of Brit lit, sagas, and Northern Europe’s folklore. 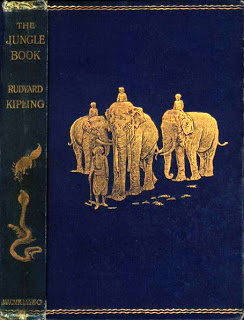 But as a foundation, I’ve always preferred animal stories set in the creatures’ natural environment, whether the Jungle Book by Rudyard Kipling (Penguin Classics, 1990) or Pixar’s “Finding Nemo.”

So most everything about my two main settings is based on field guide research and is true to the needs of the species that inhabit them: Tytonia, the woodsy domain of the governing owls, and the rugged, wintry sea-cliffs of Neversink. Both islands, but worlds apart in ways.

And the conflict is rooted in the idea that creatures are adapted to certain habitats, food supplies, and behavior cycles, and there are serious consequences if this interdependence is jeopardized.

Also, though my animals talk, I don’t consider them strictly anthropomorphic. The protagonist, Lockley Puffin, is characterized by his being a puffin; he conducts himself in a way I would expect to discover if we could really speak the auks’ language.

That’s not to say my book is as naturalistic as something like Watership Down by Richard Adams (Avon Books, 1975). To me the puffin looks like a creature Lewis Carroll or Edward Lear would have invented if it didn’t already exist. Same with the walrus or an owl so small it’s basically a head on legs. I felt like the wonderful weirdness of the animal world gave me license to have some fun with the conventions of the animal fantasy, and to venture into the absurd and improbable, like my faction of Owls Wearing Hats.

Why would owls wear hats? You’ll have to read the book to find out, but it makes perfect sense to me.