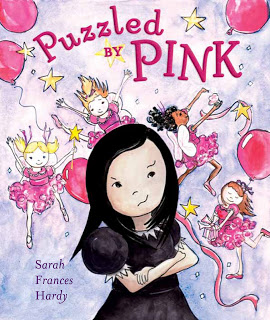 Sarah Frances Hardy is the first-time author of
Puzzled by Pink
(Viking, 2012)(author-illustrator blog). From the promotional copy:

Izzy hates pink as much as her sister, Rose loves it. So when Rose plans an all-pink birthday party with the guests dressed in fairy costumes, Izzy decides to giver her own alternative party in the attic, where the guests will be monsters, spiders, ghosts, and the pet cat.

But some powerful magic triggers the appearance of yet another guest–an unexpected one.

This will be a party nobody forgets!

People (by “people” I mean non-children’s book writers) are always surprised when I tell them that the revision process for the text of my picture books takes as much work as the illustration revisions.

For some reason, people understand that it takes a long time to get illustrations for a picture book polished up, but they think that writing the words is the easy part.

Not true! They both take an equal amount of mental energy.

Puzzled by Pink began with a simple sketch that I drew of a “Wednesday Addams” character named Izzy. I immediately connected with this little girl, and I wanted to know her story. So I spent a lot of time brainstorming, writing, and having my manuscript critiqued at conferences. 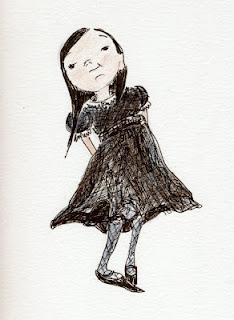 The early drafts of my manuscript were only about Izzy, but after an SCBWI critique session, I added a pink sparkly little sister to the story so that my main character would have a conflict. Yes. I’m embarrassed to say that I had originally written a story with no conflict.

When I had a basic story arc laid down with words, I started drawing thumbnails and then I made a sketched book dummy. I couldn’t believe how much I needed to change the words of the story once I started figuring out the illustrations. For example, I had the line “Rose leapt into the room” in my manuscript. I got rid of that unnecessary text by drawing Rose leaping into the room! And there were examples of words and phrases like that throughout the manuscript.

So that’s one thing picture book writers who aren’t also illustrators need to keep in mind when they’re doing their own revisions and cutting–if you can show it in the illustrations, don’t put it in the text. Ever! This is true especially if you have some very specific ideas about how you want the story to be illustrated–don’t box your illustrator in with unnecessary descriptive language. You really need to leave room for the illustrator to do his or her thing.

Anyway, in 2009, I began shopping the manuscript around with agents and based on some feedback that I was getting, I knew I had a good concept but I could tell that there were some problems with my story. I signed with a fabulous agent who is very editorial and I loved her ideas about how to fix Puzzled by Pink. I was grateful for her input and she got me over a very big hump.

I did about six more months of revisions with her–both on the text and the sketches–before we submitted my manuscript to publishers. I was really happy with the submission, and I felt like it was as shiny as it could be.

When Viking Children’s Books bought my book, I was thrilled beyond belief and waited for that first editorial letter. It came. And I was less than thrilled.

I think this was because for the first time in the journey of my book, after the intense revisions with my agent, I had gotten it to a point that I was really happy with it. It was done. Somebody bought it. All of the other times I had gone through revisions, I knew my story needed work.

This time I wasn’t so sure.

My editor at Viking suggested that I change pages around, shift the ending, and change some language that I was very attached to.

I allowed myself to panic (briefly), and then I decided to tackle the changes, doing every single thing that my editor suggested.

I figured that I would try the changes and when they didn’t work, I could say “well I tried and here’s why it just can’t be written this way.”

But a strange thing happened . . . I made all of the changes, and not only did they work, they made my manuscript better. Much better.

I had a second round of revisions with Viking of both the words and sketches, and those went about the same way. I started out reluctantly working through them, but when it was all said and done, I not only had a better book–I had a more marketable book. Now I know beyond a shadow of doubt that agents, editors and art directors are brilliant people who push you to think bigger and more creatively.

So my advice to other writers and illustrators when faced with a daunting revision is this: try everything that people suggest (especially if they are other writers, editors or agents), even if at first it doesn’t ring true to your feelings about your story. You owe it to yourself and your story to try new approaches and flip everything upside down. You never know where revisions will take you, and if you don’t like your new manuscript, you can always go back to your original version. But if your experience is anything like mine, you won’t!

I’ve always first and foremost considered myself an artist. I majored in studio art at Davidson College and I studied for two summers at Parsons School of Design in New York and Paris. For years, I showed my paintings in galleries and landed some major corporate clients.

About eight years ago, when I decided to pursue a career in children’s writing and illustration, I was completely unprepared for how hard it would be to make the shift from painting landscapes and flowers to illustrating a story. First of all, I was accustomed to unconstrained freedom in my paintings. If I needed an extra limb or two on a tree to balance the composition, I just painted them in. No one would ever know. But with illustrations, I can’t just add a couple of extra toes to my main character if I need to balance things out!

The other thing that I had to learn was to draw a set of characters consistently throughout a thirty-two page book.

One of the most helpful things for me was looking at tons of comic books and graphic novels and studying the ways that comic book artists draw their characters. It took pages and pages of sketches for me to learn how to be consistent with my characters’ proportions and likenesses.

Most importantly, though, suddenly I was bound by a written story which, to some extent, dictated what the pictures had to be. I couldn’t be lazy and not draw some important detail because it would be difficult (nor could I shy away from writing that difficult scene!).

And I had to find a way to make my illustrations add something to the text. In effect, the illustrations need to tell their very own supplemental story, and the sum of the writing and illustrating need to be bigger than each would be standing on its own–like salsa with chips or a cupcake with icing.

I have to say that my inner writer and inner artist play very well together. Because I think visually, I’m always crafting illustrations in my head as I write.

And it really helps me when editing. It’s much easier to cut a big chunk of text when I know that I can replace it with something in an illustration.

And I really love using facial expressions to establish emotions that would sound clunky if written out–no need for words like “happily” or “angrily” or “sleepily”. I can illustrate a big smile, frown or yawn. And it makes my inner writer happy to know that those emotions will be shown–especially since I have to cut so much text to get my word count as sparse as it needs to be for a modern picture book (around 500 words these days).

As for advice, I would say to only pursue publication as a writer-illustrator if you are confident that you are equally strong in both areas because essentially you are giving an editor two reasons to reject you.

So get lots of feedback from people and be sure that you aren’t weak in one area. You don’t want your brilliant manuscript to be rejected because you thought you could try your hand at illustrating it or vice versa.

Enter to win a signed, personalized copy of Puzzled by Pink. To enter, comment on this post and include an email address (formatted like: cynthia at cynthialeitichsmith dot com) or a link to an email address. Author-sponsored. Eligibility: U.S. Deadline: midnight CST May 2.