From her website: “Emma Walton Hamilton
is an author, editor, arts educator and arts and literacy advocate. She
has co-authored twenty children’s books with her mother, Julie Andrews…”

What is the Southampton Children’s Literature Conference?

The Southampton Children’s Literature Conference, now in its fourth year, is a unique forum in which to study and discuss the craft of writing for children.

The conference is located in the Hamptons, at the Eastern End of New York’s Long Island, and is offered in two sessions: a five-day session one (from July 11to July 15) and a ten-day session two (YA only – from July 18 to July 29.)

In session two, the YA novel workshop will be led by National Book Award finalist and ALA Best Book of the Year award-winning YA author Patricia McCormick.

How did you come to be involved in the conference?

My first involvement with the conference was as a guest presenter, and later as faculty member, teaching picture book writing. I began working full time for Stony Brook Southampton in 2009 as executive director of the Young American Writers Project, an outreach program to area middle and high schools, and was invited to takeover the directorship of the Children’s Literature Conference soon thereafter. Needless to say, I jumped at the chance!

Could you tell us a little about the history of the conference?

The Southampton Writers Conference, as it was long known, began in 1976 with just a few offerings in fiction, poetry and nonfiction. Over the three and a half decades since, it has gradually grown to include dozens of creative writing workshops across multiple mediums, and serving hundreds of participants annually.

Creative writing in this area has a long and distinguished history. The Hamptons are a renowned resort area only 80 miles from New York City, so writers, artists and entertainers have been summering here for over a century. The area’s literary legacy stretches back through Kurt Vonnegut and Elizabeth Hardwick to Tennessee Williams, John Steinbeck and even Harriet Beecher Stowe, whose father was a 19th-century minister in East Hampton.

Because of this, the program has been able to attract world-class authors to its faculty, authors who are also experienced, accessible teachers. The late Frank McCourt was a beloved member of the summer faculty for a decade, and the equally beloved regular faculty includes Billy Collins, Meg Wolitzer and Roger Rosenblatt.

Last summer, Rocco Staino of School Library Journal visited the conference and wrote in a subsequent article, “If you’re dreaming of becoming the next J. K. Rowling, we’ve got the perfect place for you—the Southampton Children’s Literature Conference!”

What can participants expect from the workshops?

Workshops are the heart and soul of the conference experience. Enrollment is limited to 12 lucky writers, who spend their mornings workshopping their manuscripts in an intimate, rigorous and friendly setting. Each workshop has its own focus and tone as set by the teacher, but generally speaking there is a lively balance of writing, reading and group discussion.

During free time, participants can visit the beautiful Atlantic beaches or explore charming nearby towns. Courtesy shuttles run regularly to the beach and downtown Southampton.

What highlights of past conferences come to mind?

The Children’s Literature Conference runs concurrently with the Southampton Playwriting and Screenwriting Conferences, as well as with other workshops in poetry, memoir, novel and creative non-fiction, so the synergy is rich. There are many exciting crossover events featuring well-known authors, playwrights, and filmmakers.

We’ve had the privilege of seeing readings and workshops of plays in development that subsequently go on to receive professional productions (including “The Phantom Tollbooth” and “Flat Stanley”), as well as enjoying performances and presentations from such distinguished guests as Alan Alda, Alec Baldwin, James Salter and Julie Andrews. 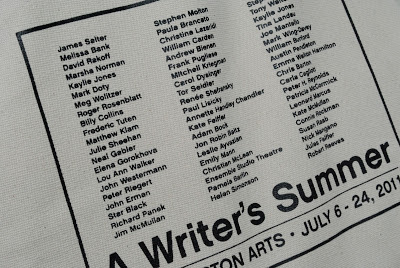 A big highlight each year is the participant readings on the final morning. This is where everyone shares the work they have been developing all week, and it’s a marathon – but it’s thrilling and galvanizing. The amount of talent on display just takes your breath away.

More than we have the space or time for! But by way of example, two-time conference attendee Susan Verde just signed a deal for her first picture book to be published by Abrams, and which will be illustrated by Peter H. Reynolds – whom she met when she attended his workshop last summer.

Tell us about the facilities, dining, setting, etc.?

The Stony Brook Southampton campus is located in Southampton, NY, the heart of the Hamptons – a beautiful and renowned resort area on the East End of Long Island.

The campus is verdant and airy, and the classrooms are light-filled and spacious. Weather permitting, all meals are held under a large hospitality tent outdoors, and catered by an excellent local catering company.

There are several lovely spaces for larger gatherings and presentations: the Avram Theatre, the Duke Lecture Hall and the Radio Lounge.

Most attendees stay in the college’s dorm accommodations, which are Spartan, but neat and clean. The rooms are generally double occupancy with a small selection of singles available for an additional price. They have occupant-controlled air conditioning and internet connections, and there are TVs in the common rooms along with vending machines. Some attendees prefer to stay off campus, and there are several hotels and motels in the area in different price ranges.

There is a fitness room equipped with cardio equipment and some weights as well as a beach volleyball court and tennis courts. And of course, the famed Hampton beaches and historic villages are just a short shuttle ride away.

What is the cost? Is financial aid available?

The cost – which includes graduate credit, if desired – is as follows:

Some partial scholarships are available. 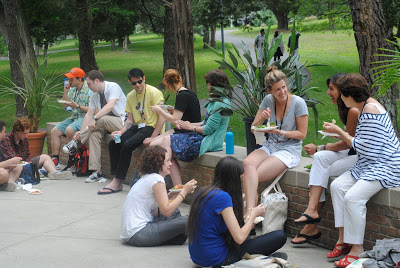 What do you love about the conference?

The faculty and staff enjoy themselves as much as the participants do! They often sit in on elective sessions, readings and other special events, so it’s not unusual to look around and see Jules Feiffer or Billy Collins sitting next to you in the audience.

Also, everyone is encouraged to cross over and explore other mediums, so we have poets taking acting classes or playwrights sitting in on children’s lit electives or poetry readings. The cross-pollination is rich and provides for a truly unique creative experience. 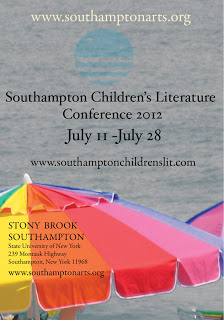 A lot! This is the first year we’ve offered two sessions to choose from. We’re also – by popular demand – adding an extra workshop for Session 1, so there will be a total of four workshops across the five days as opposed to three.

In addition, new workshops in our sister conferences include Visual Arts, Digital Film-Making, Acting, Poetry and more, all of which will provide enormous enrichment and crossover opportunities.

Participants can visit www.southamptonarts.org to see the full scope of what will be on offer concurrently with the Childrens Lit Conference. It’s really a once-in-a-lifetime experience… though having said that, many attendees return year after year!

Study with Cynthia and Greg Leitich Smith at the Southampton Children’s Literature Conference from July 11 to July 15 in Southampton, New York.