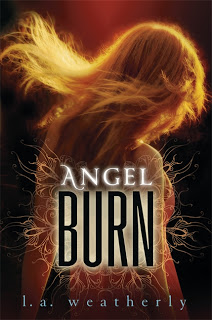 Enter for a chance to win Angel Burn and Angel Fire, both by L.A. Weatherly (Candlewick, 2012). From the promotional copy of Angel Burn:

When Alex finds himself falling in love with his sworn enemy, a half-angel with links to dark and dangerous forces, he discovers that nothing is as it seems, least of all good and evil.

In the first book in a red-hot paranormal romantic trilogy, L. A. Weatherly sends readers on a thrill-ride of a road trip

– and depicts the human race at the brink of a future as catastrophic as it is deceptively beautiful.

To enter, comment on this post and include an email address (formatted like: cynthia at cynthialeitichsmith dot com) or a link to an email address. Or email Cynthia directly with “Angel Burn & Angel Fire” in the subject line.

From the promotional copy of Angel Fire: 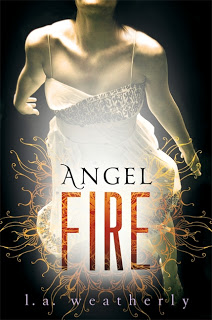 In Book Two of L. A. Weatherly’s wildly romantic, action-packed trilogy, the angels are back with a vengeance . . . and they don’t have heaven in mind.

In the wake of the Second Wave, the angel menace has exploded, and Alex and Willow are on the lam. Willow’s prophetic dream points them to Mexico City, where they connect with a fledgling group of angel killers led by the exotically beautiful Kara, an Angel Killer from Alex’s past. But the team remains suspicious of Willow, even after the more-experienced Alex takes over as leader, training them hard for a rush attack on the Seraphic Council, or “The Twelve.” This elite group of all-powerful angels is also under the scrutiny of Willow’s angel-father, Raziel, who has his own sinister plan to defeat them.

What Willow hasn’t told Alex is that there was also a mysterious boy in her dream, one she felt overpoweringly attracted to. When brooding, gorgeous Seb shows up in the flesh, he turns out to be another – possibly the world’s only other – half angel. He’s been searching for Willow all his life, and when Alex enlists this rival to help keep Willow safe, he can’t predict what chemistry will pass between them . . . or how far Willow might go to keep Alex safe. Will their love endure or spell doomsday for the human race?