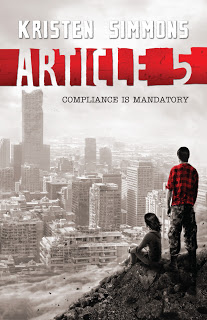 Kristen Simmons is the first-time author of Article 5 (Tor Teen, February 14, 2012). From the promotional copy:

New York, Los Angeles, and Washington, DC have been abandoned.

The Bill of Rights has been revoked, and replaced with the Moral Statutes.

Seventeen-year-old Ember Miller is old enough to remember that things weren’t always this way. Living with her rebellious single mother, it’s hard to forget that people weren’t always arrested for reading the wrong books or staying out after dark. That life in the United States used to be different.

In the three years since the war ended, Ember has perfected the art of keeping a low profile. She knows how to get the things she needs—like food stamps and hand-me-down clothes—and how to pass the random home inspections by the Federal Bureau of Reformation. Her life is as close to peaceful as circumstances allow. That is, until her mother is arrested for noncompliance with Article 5 of the Moral Statutes. And what’s worse, one of the arresting officers is none other than Chase Jennings…the only boy Ember has ever loved.

When I was writing Article 5 and its sequel, I was working full time and teaching workout classes in the evening. It made for crammed writing weekends, and speed-typing lunches, and really late nights. But when you love it, you simply have to make the time – there’s no option not to. It helped that my husband was working on his dissertation. He was strapped to his laptop while I was strapped to mine. 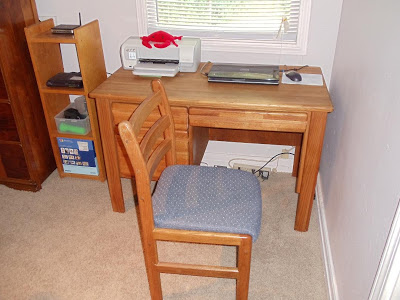 This is the desk on which I wrote Article 5 when we lived in Louisville, Kentucky (we have since moved to Tampa, Florida). In case you’re wondering, yes, it’s a child’s desk. I’ve had it since I was in the third grade which has been, well, a long time.

When we were in the process of moving, I had to sell it, which made me so, so sad. Now it’s gone to some child who probably actually can sit in the chair without his knees banging against the drawers. 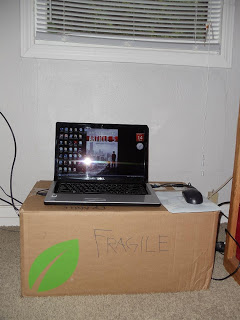 While I was finishing the second book in the trilogy, I got to use this desk, AKA Packing Box Marked Fragile. I’ve had more creativity-inducing workspaces in my life, but the experience of writing on the floor in an empty room made me feel like Ember must: ready to take off at a moment’s notice!

Now I have a lovely office. I’m surrounded by my favorite books – ones I like to read and ones I like to reference. My laptop faces a window to the backyard where I can watch the birds and the squirrels and let my mind wander. And I have a huge dry erase board to my left with all sorts of notes and scribbles about my current WiP, which I absolutely love.

Actually, it’s petrifying being a debut author in 2012 – the world could end at any moment! But mostly, I’m grateful. This has been a long journey, and there were more than a few mountains to climb.

I completed my first manuscript in 2002. And okay, it was terrible, but at the time I didn’t know that. I thought it was pretty good – I mean, it was a book wasn’t it? Hundreds of pages. Characters. Drama. Isn’t that all a book needs?

It had always been a dream of mine to be published, so I did some research, and found out you needed to have these things called agents, and to get an agent you needed to write a query letter. So I did. I wrote a positively awful query letter. And so began the pain game.

I wrote and finished several more manuscripts – all in secret, because even though I wanted to be published, I was embarrassed no one had picked me up yet – and sent out queries for those, too. I spent a lot of time in those years (yes, years) waiting for the mailman and refreshing my email inbox. Which led to a lot of time feeling like this would never happen. That I wasn’t good enough, or smart enough, or I didn’t know the right people. Writing a book was just a dream. Nothing more.

Then I wrote Article 5, and even though I knew it would break my heart, I started the process again. And I got a couple bites. Requests for a synopsis. A partial. A full. I was so reluctant to hope. I was convinced it wouldn’t pan out. In a way, it didn’t, at least not immediately. I received an offer from an agent to help me revise Article 5, with the understanding that if, at the end it still wasn’t ready, we’d go our separate ways.

I’ve never been good at advocating for myself in regards to my writing, but somehow, I talked her into three rounds of revisions. It was the best and worst summer of my life.

Finally, I was getting great, professional feedback. I’d never been a part of a critique group before. I’d never even had a beta reader! I had never heard of those things when I started. So the fact that she was working with me brought me to a whole new level of reaching my goal. But I was also petrified that if the revisions didn’t work for both of us, it would be the end.

It wasn’t the end. After three rounds of revisions, which included cutting approximately 60,000 words, she offered me a contract. Hand’s down, the most memorable moment of my writing career.

Looking back, I am so, so glad we did it this way. I learned her editing style and how she related to clients, and that I needed someone who could offer a lot of support and accessibility. It took seven years to find her, that’s right, seven years, but everything has fallen into place since then!

Like many authors, my agent sent my manuscript to my editor, and we connected after she’d read my work. I’d read advance copies of books she’d edited: Personal Demons by Lisa Desrochers (Tor Teen, 2010), and Anna Dressed in Blood by Kendare Blake (Tor Teen, 2011). I loved the pacing, and the focus on the characters, and that they were fun, thought-provoking reads.

And of course Tor was responsible for many other books I love, including Little Brother by Cory Doctorow (Tor, 2008), so I knew I was in good hands.

I knew immediately after our first phone conversation that my agent had been absolutely right – Melissa Frain was the perfect editor for Ember and Chase. She understood their personalities and their motivations, and talked about them in the present tense, as though they were real people (which they are, to me!). She had such a firm grasp of the plot, and the world, that she could immediately spot inconsistencies and hypothesize solutions. She got it.

She was also the perfect editor for me. Lighthearted. Funny. Calming.

Being a debut author is difficult – I can only speak for myself, but I’d say that’s probably true for many of us. There’s just such a huge learning curve. There’s so much in the industry that’s unknown – from what line edits are to marketing issues to lending input on a cover.

I’ve learned that a good editor serves as your champion within the publishing house, advocating for your book, and keeping you up-to-date on anything related to your work.

Like my agent, Melissa is approachable, and I like that. I trust her. Although I did meet her on the phone, I think if I’d have met her in person, say at a conference, I would have looked for that quality in her personality. To be a writer is to be vulnerable, and to be an editor is to be critical, and if you can’t find some way to bridge the two sides, it’s going to be a very painful process.

Luckily for me, it’s been a fabulous relationship.