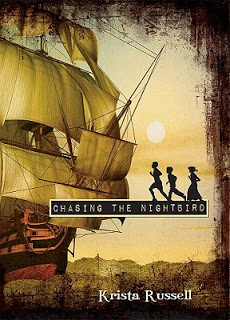 Krista Russell is the first-time author of Chasing the Nightbird (Peachtree, 2011)(teachers guide). From the promotional copy:

Fourteen-year-old Lucky Valera is a seasoned sailor about to join the crew of the whaling ship, Nightbird. But when his estranged older brother suddenly kidnaps him and forces him into servitude as a mule spinner at the mill, his life takes a dramatic turn for the worse.

Determined to escape, Lucky links up with some unlikely allies: Daniel, a fugitive slave who works alongside him at the mill, and Emmeline, a Quaker ship captains daughter. Emmeline offers Lucky passage on her fathers ship in exchange for his help leading escaped slaves through the Underground Railroad, but Lucky knows getting out from under his brother wont be easy.

When their plans go awry and Daniel is threatened by ruthless slave catchers, Lucky discovers that true freedom requires self-sacrifice, and he comes eventually to realize he is part of a larger movement from which he cannot run away.

I grew up in New England and, as a kid, one of my favorite places to visit was the New Bedford Whaling Museum. I guess you could say my research began back then, with books from the gift shop and the rope bracelets my sisters and I wore every summer.

While New Bedford has long been famous for whaling, its connection to the Underground Railroad is not as well known. I first read about it in a newspaper story describing a secret room found when a building in the downtown area was demolished.

I was fascinated, and started to do a little digging. I learned that Frederick Douglass traveled the Underground Railroad using borrowed sailor’s protection papers. He actually lived in New Bedford and worked on the wharves as a ships caulker. Around the same time, huge textile mills had begun to spring up, competing with whaling for the city’s workforce.

It was a tumultuous period, and a story I couldn’t resist.

When I began research for the book, I looked at photographs, newspapers, and first hand accounts to get a picture of what New Bedford was like in the mid-1800s.

I also wanted to know more about life on a whaleship.

What I found was that the ship formed its own society, and in many ways a very egalitarian one. The work was so dangerous and the crew so dependent on one another, that their judgments tended to be based on ability rather than skin color (on my website is an advertisement made by the crew of a whaleship).

Still, my biggest roadblock was getting into the head of my main character, Lucky. Despite all the research I’d done, I was having a difficult time putting myself in the shoes of a boy who’d spent more time at sea than on land. How would he view the world? What were his hopes and dreams? What rules did he live by?

After working on several different versions of the story, I set it aside for almost two years.

As writers, we often find inspiration in unlikely places. My greatest coup came from an estate sale. While looking through a box of books, I found a title I hadn’t come across in my research. Black Hands, White Sails by Patricia C. and Fredrick L. McKissack (Scholastic, 1999) is an inspiration in more ways than one.

Aside from offering a well-researched history of African American whalers, it contained a list of whalemen’s commandments. Rules such as fight anytime you think you can win, run when you think you can’t win, and never volunteer.

As soon as I read the whalemen’s commandments, I knew I’d found my main character, Lucky.


As a historical fiction writer, how did you capture the voices of the era? What resources did you turn to? Did you run into challenges translating the language of the era for today’s young readers? What advice do you have for other authors along these lines?

The voices of the era were a challenge, mainly because there was such a diverse cast of characters. I turned again to primary sources, but also to works of historical fiction to see how other authors handled the voices of their characters. Chains by Laurie Halse Anderson (Simon & Schuster, 2008) is a favorite and a great example of brilliant dialogue.

Aside from the voice of a whaleman, one of my main characters is Quaker. To make her dialogue authentic I needed lots of thees, thous, and thines. Enough to make your head spin. What I’d done (at least on the first pass) was to get it written. But, of course, it was important to get it right. And to do so without making her speech so clunky that it stopped the reader.

Another challenge was that I’d fallen in love with the seafaring jargon of the era (my editor came to call it pirate-speak) and went overboard in the manuscript. I had to be brutal about cutting words or phrases with meanings not immediately clear in context. The dialogue needed to flow, and I had to resist the urge to launch into a history lesson.

But I wouldn’t change the process I went though. The salty language and Quakerisms made writing the story fun.

I guess my advice to other writers would be to jump right in: immerse yourself in the voices of the era you’re writing about. Revel in the wonderful words, phrases and expressions you’ve worked so hard to uncover in your research. You can always trim the sails later.

Don’t miss the teachers guide to Chasing the Nightbird or extras from Krista Russell.

3 thoughts on “New Voice: Krista Russell on Chasing the Nightbird”