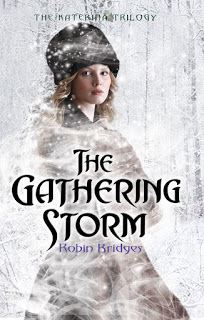 Robin Bridges is the first-time author of The Gathering Storm (Book One of The Katerina Trilogy)(Delacorte, 2012). From the promotional copy:

As she attends a whirl of glittering balls, royal debutante Katerina Alexandrovna, Duchess of Oldenburg, tries to hide a dark secret: she can raise the dead. No one knows. Not her family. Not the girls at her finishing school. Not the tsar or anyone in her aristocratic circle.

Katerina considers her talent a curse, not a gift. But when she uses her special skill to protect a member of the Imperial Family, she finds herself caught in a web of intrigue.

An evil presence is growing within Europe’s royal bloodlines—and those aligned with the darkness threaten to topple the tsar. Suddenly Katerina’s strength as a necromancer attracts attention from unwelcome sources . . . including two young men—George Alexandrovich, the tsar’s standoffish middle son, who needs Katerina’s help to safeguard Russia, even if he’s repelled by her secret, and the dashing Prince Danilo, heir to the throne of Montenegro, to whom Katerina feels inexplicably drawn.

The time has come for Katerina to embrace her power, but which side will she choose—and to whom will she give her heart?

I started hoarding books on Russia after reading one about the history of the Moscow Art Theater over ten years ago. The culture that was flourishing in Russia at the end of the 19th and beginning of the 20th century was fascinating to me–this was the time when artists like Tchaikovsky, Faberge, Tolstoy, and Repin were all creating their masterpieces. 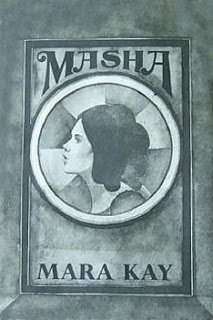 I always knew I wanted to write a story about that time and place. I began collecting books, mostly used, about Russian history, from biographies of the Romanovs to old Russian cookbooks to museum catalogs of Faberge treasures. The prize of my library is a copy of Masha by Mara Kay (Lothrop, Lee, and Shepherd, 1968). It’s about a young girl growing up at the Smolny Institute for Noble Maidens in the reign of Alexander the First. I fell in love with this school and decided it would be the perfect setting for my story.

The more I read about nineteenth century Russian history, I discovered the superstitions and rumors swirling around the Imperial court. My what if? moment came when I wondered what if these peasant rumors were true–what if the Russian court really did consist of witches and sorcerers? And what if one of the noble maidens at Smolny was the only one who could defend the tsar from these monsters?

My research began to include Eastern European folklore and fairy tales, many of which I’d heard as a child. My great-grandparents were of German descent but their families had lived in Russia for generations. My great-grandfather owned a bakery outside of Kiev in 1900 and my great-grandmother learned to speak several languages, including Russian, German, Polish and Yiddish, in order to serve the diverse customers that came into the shop. Stories told to me about the old bakery and its old samovar were woven in with stories about firebirds and snowmaidens as well as Grimm fairy tales.

As I researched the Romanov family tree, I decided not to use an actual person for my main character. Katerina Alexandrovna of Oldenburg did not really exist, but Evgenia Maximilianova and Alexander Petrovich of Oldenburg did. Prince Alexander really did open up the Institute for Experimental Medicine and really did give much of his wealth to hospitals and other charities.

I’d like to think that a daughter of his would have shared his interest in medicine. Women were not allowed to attend medical school in Russia in the late nineteenth century, but a generation later, the Empress and her daughters became nurses. They took care of wounded soldiers during the Russo-Japanese War under the supervision of a princess who’d attended medical school in Switzerland, Princess Vera Gedroits.

As a nurse myself, researching the early women doctors of Russia was inspiring.

Katerina’s story became a late nineteenth century fairytale, filled with spiritism and superstition of the era, as well as the hope for a new century filled with progress. I trolled the Alexander Palace Time Machine’s website for photographs and biographies of Russian nobility. I emailed back and forth with the director of the Museum of Medical History at the University of Zurich. I researched the mystical societies and secret orders of the time.

Not being able to read German and Russian texts has been frustrating, but I’ve had plenty of English resources.

Sarah Miller, a fellow Blue Boarder and the author of The Lost Crown, (Athenum, 2011), was kind enough to share tons of old Romanov photographs with me. Before The Katerina Trilogy is complete, I hope to travel to Russia and see the palaces and museums for myself.

As soon as I learn to speak Russian.

When I was an English major, my writing consisted of literary short stories, based on growing up in the South. I thought I had to be Eudora Welty.

I put my writing aside when I went back to school to become a nurse. I did not write a single word for two years.

By then, I’d fallen in love with the books my children loved, especially Harry Potter and the Princess Diaries. And I remembered why I’d wanted to be a writer when I was little.

Being a pediatric nurse is a difficult but incredibly rewarding career. But it’s also perfect for me as a writer. I work three twelve hour shifts on the weekend, and then have the rest of the week at home to write. This works best during the school year, when I have an empty house to myself during the weekdays. Just me and the dogs.

4 thoughts on “New Voice: Robin Bridges on The Gathering Storm”