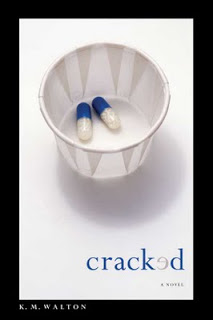 Victor hates his life. He’s relentlessly bullied at school and his parents ridicule him for not being perfect. He’s tired of being weak, so he takes a bottle of his mother’s sleeping pills — only to wake up in the hospital.

Bull is angry, and takes all of his rage out on Victor. He’s the opposite of weak. And he’s tired of his grandfather’s drunken beatings, so he tries to defend himself with a loaded gun.

When Victor and Bull end up as roommates in the same psych ward, things go from bad to worse. Until they discover they just might have something in common: a reason to live.

Not until I read The Absolutely True Story of a Part Time Indian by Sherman Alexie (Little, Brown, 2007) did I realize that young adult fiction could be so real. Or so raw. I was blown away by that book and how authentically the main character was written.

Then I read Going Bovine by Libba Bray (Delacorte Books (2009) and Looking for Alaska by John Green (Dutton Books, 2005) in succession and experienced not only severe writer envy, but also an overwhelming desire to try my hand at contemporary YA. Up to that point I’d only written middle grade suspense manuscripts.

The perfect storm occurred in my hotel room while attending my second SCBWI Winter Conference in NYC:

A bully and his victim rushed into my head, and I rushed back to my hotel room and got a T-chart going. I brainstormed a list of character details and plot points. Cracked was born.

I never put a swear word or an edgy scene in for sensationalistic purposes. If it’s in there, it’s because it needs to be.

I wanted it to be true.

Once I have my “big picture” plot points reasoned out in my head, I move onto character development. My characters start out as bullet-pointed lists. Personality traits, quirks, physical descriptions all get brainstormed into a sloppy, handwritten inventory. However, I don’t intimately know my characters until revisions. The questioning, revisiting and fine tuning of revisions are when their human nuances surface. That’s when they come alive for me as their creator.

During revisions I’ll find myself asking, “Would he really say that?”

Libba Bray’s directive to ask yourself “Is it true yet?” always sits on my shoulder as I revise.

I support my answer to Libba’s question by asking myself a few pointed questions:

I am a huge fan of writers that disappear from their writing and let the characters take front and center. Nothing throws me out of story more than when characters break character.

I believe the best way to create an authentic character’s voice is to have confidence in your characters—let them be themselves. Let them act, think, do and feel exactly how they would if they were standing right in front of you.

Do you have an hour or so? Kidding.

I queried for nearly two-and-a-half years, racked up 148 rejections on three different novels and officially gave up one day. Then a funny thing happened the next day – Ms. Sarah LaPolla from Curtis Brown Ltd. requested the full of Cracked. And the rest, as they say, is history.

But let me back up just a little bit here, to the “querying for 2.4 years part”. I’d like to share what that looked like for me. I lived on querytracker.net and absolutewrite.com, scouring for information, anything that could help me break through. I put my query letters on a few key places for proper public floggings, and despite the black eyes I sustained, my query letters got better and better and better.

But the most important thing I did while querying was to continue writing. During my query period I wrote four more novels. Cracked was the third, and I knew it was the one that would land me my agent. With each new novel, my craft improved. So keep writing, a lot.

Lastly, to writers doing everything in their power to land their agent: Do Note Give Up!

The power is in your hands to research and query and write and revise and query some more.

It’s always about the work and the writing. Get out there, get your work out there, get feedback, become a better writer, learn about the craft of writing, try new techniques in your own stories, read everything you can in the genre in which you write, build your own buzz, join groups, visit every site you can and make comments. You can do it.

Believe it will happen. Envision it happening. Make it happen.

Read an excerpt of chapter one from Simon & Schuster.

Your Mindset and Critique by K.M. Walton from The Apocalypsies.

Of the video below, K.M. says: “This bit of fun is dedicated to unpublished writers everywhere refusing to abandon their dream.”