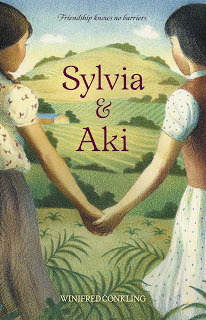 Winifred Conkling is the first-time author of Sylvia & Aki (Tricycle Press, 2011). From the promotional copy:

Sylvia never expected to be at the center of a landmark legal battle. All she wanted was to enroll in school.

Aki never expected to be relocated to a Japanese internment camp in the Arizona desert. All she wanted was to stay on her family farm and finish the school year.

The two girls certainly never expected to know each other, until their lives intersected in Southern California during a time when their country changed forever.

Here is the remarkable story based on true events of Sylvia Mendez and Aki Munemitsu, two ordinary girls living in extraordinary times. When Sylvia and her brothers are not allowed to register at the same school Aki attended – instead, they are sent to a “Mexican school” – the stage is set for Sylvia’s father to challenge in court the separation of races in California’s schools.

Ultimately, Mendez vs. Westminster School District led to the desegregation of California schools and helped build the case that would end school segregation nationally.

As soon as I heard about Sylvia Mendez, I knew I wanted to write about her. I actually had a lightning-bolt moment: I was listening to NPR on the car radio when I heard a report about the 50th anniversary of the Brown. v. Board of Education lawsuit that desegregated the public schools.

The story mentioned a discrimination case that happened years before the Brown case. It involved a nine-year-old Mexican-American girl who wasn’t allowed to go to the “white” school near her home. The girl’s father filed a lawsuit, and Thurgood Marshall — the famous civil rights attorney – wrote a supporting brief that included the argument he would use seven years later in the Brown case.

Without Sylvia Mendez and her lawsuit, the landmark Brown case wouldn’t have happened the way it did. I was so fascinated by the NPR report that I actually pulled my car over on the side of the road and started taking notes. Seriously.

I started reading everything I could about Sylvia Mendez and the lawsuit her father filed against the school system in Orange County, California. I read thousands of pages of transcripts of the trial. To some people that might sound boring, but I found it fascinating.

Today it’s hard to imagine a Superintendent of Schools calling a group of children “inferior” in their ability to learn and saying they have “generally dirty hands, face, neck, and ears,” but that’s what happened. I cringed when I imagined Sylvia, an impressionable third-grade girl, sitting in a courtroom and listening to her school superintendent testify under oath that he considered her inferior to the white students. I couldn’t believe the cruelty of the testimony.

I wanted my readers to share my outrage, so I used the actual court transcripts as the basis of the dialogue in the court scene in Sylvia & Aki. I didn’t want to rewrite or reinterpret history. Instead, I let the Superintendent speak for himself, which I think provides a much more powerful sense of the prejudices and discrimination experienced by Mexican-Americans in southern California, 1945.

I knew the segregation lawsuit would be the backbone of the story, but as I did my research, I became emotionally involved in a second, equally compelling story that happened at the same time. In the early 1940s, Japanese families in southern California were removed from their homes and farms and forced into internment camps for the duration of World War II.

Sylvia’s story began in 1941 when she moved to a farm in Westminster, California, and was told she had to go to a “Mexican school.” But another young girl – a Japanese girl named Aki – had lived on that farm until she was forced to move to Poston, an internment camp. Here was a second young girl who was also subjected to heartbreaking discrimination. In addition to leaving her home, Aki was separated from her father for years because he was sent to a different internment camp.

Ultimately, I realized that Sylvia and Aki both had important stores to share. Their life journeys were intertwined, and I didn’t think I could tell one story without including the other.

Since my book is based on actual events, the first thing I did was find Sylvia and Aki, who were now in their seventies, and make sure they were comfortable with me telling their stories.

I found them both in southern California, not too far from the 40-acre asparagus farm where my book takes place.

I spoke with the women on the phone several times, and then I went to California to interview them in person. By that time, I had fallen in love with their story and I just wanted to tell it the best way I knew how.

I struggled with the format for the book. I wrote it as nonfiction, then I rewrote it as fiction. I wrote it in first-person, then rewrote it in third-person. I wrote it using a three-part format – Sylvia’s story, Aki’s story, then the summer with the girls together – then I rewrote it in alternating points of view on a single timeline. The story is complicated in that there are distinct narrative threads, but the two story lines share a lot of common themes, and, in the end, the girls did spend time together and become friends in the summer of 1945.

My ultimate goal was to tell the story in a way that would make it most accessible to young readers. The story was true, but I wanted it to read like a novel so that young readers would identify with Sylvia and Aki as children, not historical figures.

At first I worried that choosing a fictional approach might undermine the truth of the story, but I ultimately decided that the Truth – capital “T”, the emotional truth – of what happened could best be conveyed in fiction.

I didn’t want to misrepresent any of the events, so I had both Sylvia and Aki review the text to make sure it was accurate. When they both told me I got it right, then I knew I had chosen the correct approach.