A picture book is a true blending of skills, of storytelling through words and pictures.

Yet most picture book authors don’t get to work with their illustrators. In most cases, authors interact with only the editor, who in turn works with the illustrator.

In contrast, illustrator Ard Hoyt and I work with editors, but we also collaborate closely on each book together, including our newest release, The Day Dirk Yeller Came to Town (FSG, 2011).

Though I live in Minnesota and Ard lives in Arkansas, that hasn’t kept us from e-mailing each other or having face-to-face visits at conferences regarding our books. Ard likes to tell audiences that my books “illustrate themselves,” but I know One-Dog Canoe (FSG, 2003), Utterly Otterly Day (Simon & Schuster, 2008), and Some Dog! (FSG, 2002) brim with energy because of Ard’s endearing and whimsical illustrations.

All stories have their origins, and my most recent picture book, The Day Dirk Yeller Came to Town, dropped into my lap. A gift. On a trip to New York City to visit editors, I woke up at midnight in my hotel room with these words rolling through my head: “The day Dirk Yeller came to town, the wind curled its lip, cattle quit lowin’ and tumbleweeds stopped tumblin’ along.” I wrote down the words, went back to sleep, and in the morning wrote the first draft of the story.

Before this story was under contract, I e-mailed the manuscript to Ard on the inkling that he might be the perfect illustrator for this story. But was he interested? He immediately replied with: “You have to let me illustrate this book!”

Ard, little to my knowledge, had kept an ongoing love of all things western and couldn’t wait to illustrate this story. Shortly after, we signed up the book with FSG in New York.


We discussed Dirk Yeller as a character. He had to be “rough and tumble” but “redeemable” by story’s end.

I shook my head at the first image of Dirk Yeller. Nope. Too super-heroish. Nope.

The next image I saw was of a war-covered Dirk with lizards and toads crawling off his head. Nope. This character had to become someone Miss Jenny, by story’s end, could fall for.

Eventually, Ard came up with the right blend of the two, and there is now only one Dirk Yeller.

When Ard asked me what kind of horse I envisioned for Dirk Yeller, I sent him photos of majestic friesans. But Ard had something a little less regal in mind, so I sent him a photo of my husband’s horse, Midnight–a cross between a Belgian and Morgan. This time, Ard thought the horse was perfect for our outlaw.

An illustrator always brings more to the story than the author delivers in text. Ard does this in spades! 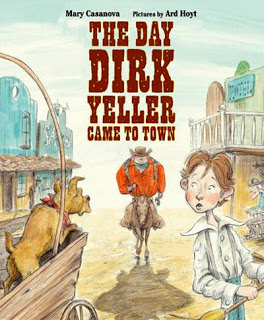 In The Day Dirk Yeller Came to Town, for example, Ard added a subtext story of a cat chasing mice, who end up by story’s end, chasing the cat. And he brilliantly extended the story with the end pages.

Together, we’re working on three more picture books, in various stages of development. I realize that my author-illustrator experience is atypical. I wish that weren’t so because sharing the co-creative process with Ard Hoyt is richly satisfying.