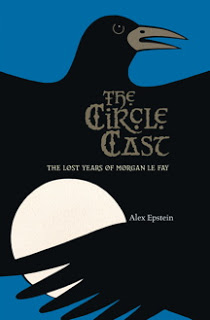 Alex Epstein is the first-time author of The Circle Cast: The Lost Years of Morgan le Fay (Tradewind, 2011)(blog). From the promotional copy:

The sorceress Morgan le Fay – seducer of King Arthur and destroyer of Britain – was a girl once. But how did an exiled girl become a king’s nemesis?

Britain, 480 AD. Saxon barbarians are invading, pushing the civilized British out of their own island. Morgan is the daughter of the governor of Cornwall. But when her father is murdered and her mother taken as the King’s new wife, she has to flee to Ireland to avoid being murdered herself.

But Ireland is no refuge. She’s captured in a slave raid and sold to a village witch. As Morgan comes of age, she discovers her own magical powers. She falls in love with a young Irish chieftain, and makes him powerful. But will her drive for revenge destroy her one chance for love and happiness?

When I was a kid, my dad used to read the T.H. White books to me — The Once and Future King (Collins, 1958), The Book of Merlyn (University of Texas, 1977), The Sword in the Stone (Putnam, 1939). That gave me a lifelong fascination with the King Arthur stories.

At first I just loved the magic and the honor and the swordplay. But as I grew up, I got interested in the human relationships. There seemed to be a whole hidden story behind the legend. King Arthur has no children, but no one complains — why? For a king not to have an heir is alarming. Why does Arthur tolerate Morgan le Fay’s efforts to kill Guinevere? Why does he wait so long to confront Lancelot for having an affair with his wife? And of course the big question: how does Morgan go from being sent off to “a nunnery” to being the most powerful witch in legend? They don’t usually teach necromancy in nunneries, do they?

The Circle Cast is a try at some answers. It seemed to me that maybe Arthur loved Guinevere, but not as woman, as an ideal. But maybe he loved Morgan as a woman. She was his half-sister, which made that a problem; but only in the new, Christian context. To an early Celt, it wouldn’t have been a big deal. Arthur is torn between the old and the new, the ideal and the woman. He doesn’t confront Lancelot because he knows he’s not doing right by Guinevere. But he can’t help himself. You love who you love.

People in my own life did things that resonated with the Arthur story; I won’t get into them here; and maybe that’s why I stayed interested in the story over the 15 years I wrote and reworked the book through many drafts.

I think you have to start with the character, and Morgan is a fantastic character. She’s so angry, but she has every right to be. She’s offered grace, and she’s offered love, but if she accepts either, she’ll have to stop being angry. And if she gives up her angry, who is she? It’s what’s defined her, what’s made her strong, what allowed her to survive — and it’s what powers the magic.

I did a lot of historical research. I do love to read about history. The Circle Cast is set in 480 AD, almost a century after the Romans abandoned Britain, and a generation after the barbarians sacked Rome. That’s not the traditional Arthurian setting, but it’s when Arthur probably flourished, if you believe Geoffrey Ashe. Ashe makes a very convincing case that a Roman-style dux bellorum called Riothamus (= “High King”) beat the Saxons for about two decades before heading off to help the Romans on the Continent. He disappeared near the town of Avallon.

It’s a time when all bets are off. The Saxons are pushing the British out of Britain. Christianity is replacing the Old Religion, which may have involved the worship of a war goddess called Bellona Morigenos. She’s the same goddess the Irish worship as the Morrígan, a scary battle queen whose crows take slain heroes to Valhalla by eating them. My first wife did her Ph. D. thesis on the Morrígan, and I edited it, so for a little while there I might have been the person who knew the second most about Her.

I went to Ireland and England, too, and climbed up on South Cadbury Castle, a hillfort that might have been Camelot. I climbed up on Cader Idris in Wales, known as Arthur’s Seat. I went to Tintagel. And I went to the lakeshore of the yew trees, now called Emly. 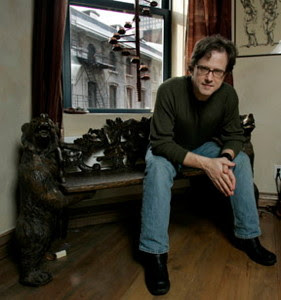 I tried to make the historical details as gritty and real as possible. Chimneys hadn’t been invented yet. The Irish didn’t have any horses big enough to ride; they had chariot ponies. The Irish worked butter into their hair before battle to make it stand up. All the strange details in the book come out of research.

The magic comes out of contemporary neo-pagan Wicca. I met a lot of witches when I was first writing this book, and participated in some intense rituals. I’ve rarely felt in touch with the powers of the Earth — certainly never anything like Morgan. I can make magic happen on the page but I rarely feel it. I’m not sensitive that way.

But I did see a woman draw down the Moon, and I could swear there was someone else in her, someone ageless and powerful. So the magic is as real as I could make it, too.

I didn’t sell this book through an agent! It’s funny, because I have no shortage of agents. I have screenwriting agents in Toronto and Montreal, and I have a nonfiction book agent.

I had a terrific, smart, hardworking fiction agent for a while, Ginger Clark (formerly) of Writers House, and we came close, but at the time King Arthur books seemed to be out of style.

A couple years later, I contacted a publisher in Canada about the movie rights for a novel he published, and we got to talking.

Turned out he was interested in my book as a YA novel. It already more or less was one, it just needed to be trimmed down a bit — and the trims were all for the good, thanks to my terrific editor, Kim Aippersbach.

So I guess my advice would be: persevere. Try different avenues. Keep reworking the book when you get good feedback.