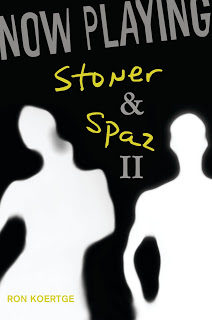 I always admired people who wrote sequels. I was lucky to get through one of my novels without forgetting the main character’s name and gender. Then I’d go to a conference and watch other writers sketch a two or three book arc on a white board—plot, sub-plot, hero, unreliable narrator, death, regeneration, and enough twists and turns to baffle the Minotaur.

Oh, so what. I liked moving from book to book—writing in verse one time then not, meeting new teenagers, creating new landscapes, solving old problems in new ways.

If I wanted to hang around people I knew well, I could visit my in-laws and eat the fruit salad. You know the fruit salad, the one Aunt B. brings, the one with the miniature marshmallows and the inflamed cherries.

To my surprise, though, a year or two ago, Kevin Boland—the hero of Shakespeare Bats Cleanup (Candlewick, 2003)—turned up. I was happy to see Kevin again. We both liked poetry and baseball. I didn’t actually think of Shakespeare Makes the Playoffs (Candlewick, 2010) as a sequel. I just wanted to hang out with this kid and write even more poetry.

Turns out I pretty much hit for the cycle and then some. I mixed free verse with the ghazal, the sestina, the villanelle, the pantoum and more. Giving Kevin a new girlfriend who was as crazy about poetry as he was made writing more fun. They were good kids. No worries. Everything turned out well.

Then I was through with sequels. One was a nice surprise. Thank you, poetry gods.

Now on to something else.

But you know what they say: If you want to make God laugh, have a plan. Because one day when I thought I was working on something new I got a postcard from a fan. Four words.

Okay, three words and a contraction:

And just like that, I was worried about her, too. Stoner & Spaz (Candlewick, 2002) was a serious book (or at least as serious a book as a smartypants like me can write).

Colleen is a drug addict. She’s reckless and shot through with self-disgust. She can be scathing and bitter. Sarcasm is her sonnet-form.

Ben is just about the only good thing in her life, and because he loves her, she thinks he’s not only a spaz but a dope. Who could possibly care for a burnout like her?

At the end of Stoner & Spaz, Colleen leaves Ben and goes off with a guy in a Camaro who knows where there’s a party.

Now Playing: Stoner & Spaz II (Candlewick, 2011) begins with a furious and heartbroken Ben confronting her the very next day.

Now that’s a sequel—one night apart and a whole book to follow.

I remember writing Ben’s anguished question to a chastened but still defiant Colleen: “How could you do that?” I thought to myself, Seriously, Colleen. How could you?

That’s why I wrote the sequel: to find out.

Look for an interview with Ron in the “Under Cover” column of the October issue of School Library Journal.

6 thoughts on “Guest Post: Ron Koertge on They Made Me Do It. I Didn’t Want To, But They Made Me”