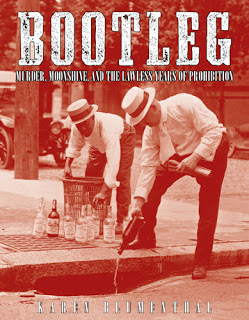 As a nonfiction author, I’ve come to appreciate that powerful photographs and cartoons of the day can truly help bring a time period alive for a young reader. But finding and acquiring those images from recent decades can be surprisingly difficult.

I ran into the problem headfirst working on two books that have just come out–Bootleg: Murder, Moonshine, and the Lawless Years of Prohibition (Roaring Brook, 2011), about the prohibition era, and Mr. Sam: How Sam Walton Built Wal-Mart and Became America’s Richest Man (Viking, 2011). Somehow, I nearly drowned in the potential images from the early 1900s, when photography was relatively new–and I struggled to find material for Mr. Sam, though he built his business after World War II.

How do you figure that?

It appears that the folks who commission and collected photographs, cartoons and other images were much more thorough and thoughtful about taking care of their collections when photographs were expensive and precious than they were when they became more common.

Decades-old magazine and newspaper photos, for instance, often have been turned over to libraries like the Bentley at the University of Michigan, historical societies or the Library of Congress, which had an extensive collection of Anti-Saloon League propaganda. Or they can be found in huge photo houses, like those at the Associated Press, Corbis and Getty Images, where I found a fabulous New York Daily News image of children trying to scoop up wine poured into the street.

But fantastic photos of Sam Walton that appeared in Fortune magazine in the late 1980s were nowhere to be found. A woman at the magazine–who had been laid off and was in her last few days–informed me that copies weren’t kept and I’d need to find the photographer. Unfortunately, his last known phone number was disconnected and letters I sent to two previous addresses, including his current driver’s license address, were never answered. I never located him or his photos.

A search for 30- and 40-year-old BusinessWeek photos hit a similar dead end. A Forbes photo was a particular favorite, but Forbes didn’t return emails or phone calls. Based on some threads on the Internet, I concluded the photographer, Bill Batson, had worked for a Kansas City newspaper. A helpful person in the photo department couldn’t find the image, but told me Batson had left Kansas City to work for the paper in Omaha, Nebraska. Sadly, a former Omaha colleague informed me, Mr. Batson died in 2002 and the whereabouts of his photos the late 1970s were unknown.

Luckily, the University of Missouri had run the image in an alumni magazine, and I was able to use it from a scan, crediting the photographer.

Several people I spoke to told bone-chilling stories of librarians tossing old photos and negatives during one clean-up or another.

Contemporary cartoons are almost as hard to find. Outside of Doonesbury, finding a comprehensive electronic archive is almost impossible; you need to find some kind soul who has kept a file of favorites or call the artists directly. 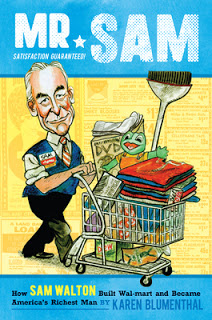 Eager to find Wal-Mart cartoons from the 1980s, I emailed a half-dozen or so long-time editorial cartoonists whose information I found through the National Cartoonists Society and other searches. I came up empty–until Pulitzer Prize winning cartoonist Paul Szep wrote back that he hadn’t done a cartoon, but he would happily draws a caricature of Sam Walton. A wonderful cover design grew out of that email exchange.

From about the mid-1990s on, images and cartoons commonly have been kept in digital form and increasingly are searchable. But too many contemporary images from the decades just before are being lost to budget cuts and general sloppiness.

Even if the images are donated to libraries or archives, budgets are so tight that they may languish in boxes for years before they can be catalogued, let alone digitized.

I don’t have a simple answer. But as a believer in the importance and power of history to educate and enlighten us, I can only hope that today’s photographers, cartoonists, archivists and librarians will make an effort to preserve these important images for the benefit of generations to come.

4 thoughts on “Guest Post: Karen Blumenthal on the Power & Challenges of Using Photos & Cartoons in Nonfiction”