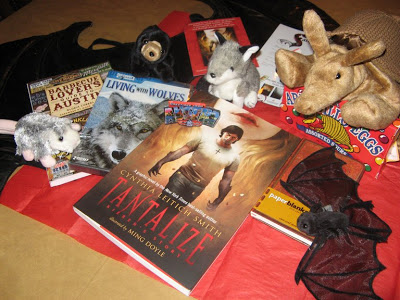 Tantalize: Kieren’s Story is now available from Candlewick Press in the United States and Canada! It will be published Oct. 1 by Walker Australia and New Zealand and Oct. 6 by Walker Books in the U.K. Watch Cynsations for additional announcements.

To enter, comment on this post and include an email address (formatted like: cynthia at cynthialeitichsmith dot com) or a link to an email address. Or you can email me directly with “Tantalize: Kieren’s Story” in the subject line. Author-sponsored. Deadline: Sept. 6. 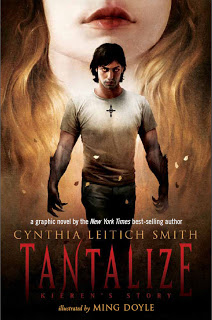 Tantalize as you’ve never seen it before —from a Wolf’s-eye view!

Cynthia Leitich Smith is the acclaimed author of the prose novel Tantalize, as well as Eternal, a New York Times and Publishers Weekly bestseller, and Blessed, all set in the same fictional universe. She says of Tantalize Kieren’s Story: “An unjust accusation. A true love in peril. It’s enough to make you howl.” A member of the Vermont College of Fine Arts faculty in writing for children and young adults, she lives in Austin, Texas.

Ming Doyle was born in Boston to an Irish-American sailor and a Chinese-Canadian librarian. She earned her BFA from Cornell University with a dual concentration in painting and drawing. She has since depicted the exploit of zombie superheroes, demonic cheerleaders, vengeful cowboys, and dapper mutants. Tantalize is her first full-length graphic novel—and marks her first encounter with a wereopossum.

This Howling Great Giveaway is the second in a week-long series of posts, celebrating the release of Tantalize: Kieren’s Story (Candlewick, 2011) after which we’ll return to our regularly scheduled programming.