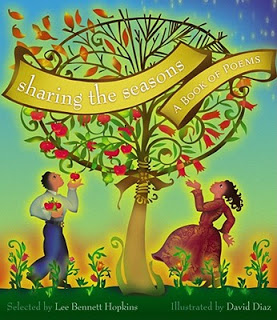 Congratulations to Lee Bennett Hopkins! Last Thursday, Lee was officially inducted into Guinness Word Records as the world’s most prolific anthologist of poetry for children (with more than 113 titles published).

A Delectable Taster of Picture Books from Singapore by Myra Garces-Bacsal from PaperTigers.org. Peek: “Among the qualities I observed from the variety of picture books that I took pleasure in reading was that most of the narratives (1) are informative; (2) are meant to educate or share some knowledge concerning an individual’s developmental disorder/illness; (3) highlight some environmental issue or societal concern; or (4) provide some random fact about animals, place, or groups of people.”

The Secret to Twitter that Can’t Be Taught from Jane Friedman. Peek: “Whenever you set out to use social media as a means to an end (e.g., selling books), that tends to ensure you won’t attain your end. It’s a very Zen process that doesn’t necessarily reward those who ‘try’ the hardest.”

The ABCs of Story Structure by Stina Lindenblatt from Adventures in Children’s Publishing. Peek: “…turns out screenwriters had the right idea when they created the three act structure. For those of you who are new to the concept of story structure, here are the abbreviated ABC’s to help whip your story into shape.”

Cantastic Guest Author: Norah McClintock (“author of award-winning mysteries for teens) from Lindsey Carmichael at Ten Stories Up. Peek: “…for those who care to look or have eyes that are open to seeing and ears that are open to listening, joy and hope exist, often in the tiny things like a clear day, the smile of a stranger, the purr of a cat (that does it for me every time), and the daily proof of the adaptability, generosity, and goodness of most people who are, after all, in the same boat as us.” 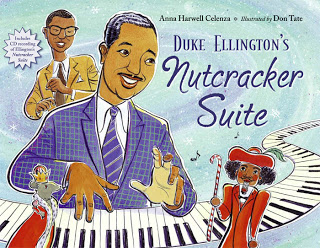 Toot Toot Tootie Toot: an Illustrator Captures Duke Ellington’s Nutcracker Suite by Don Tate from Hunger Mountain: A VCFA Journal of the Arts. Peek: “wanted a certain improvised spontaneity, but I had trouble loosening up. I normally paint very tight, very planned. Hopefully I accomplished a little of both. Ellington’s music has a certain spontaneity, but at the same time, it’s meticulously planned out down to the last note.”

The Great Wall of Publishing by Patricia C. Wrede. Note: an excellent post on an insider versus outsider’s perspective on publishing with particular attention to the role of agents. Source: Danyelle Leafty from QueryTracker.netBlog.

My Query That Worked by Shelli Cornelison from Shelli’s Soliloquy. Peek: “This is my query that garnered requests, led to two offers of representation, and ultimately, my signing with Karen Grencik.” 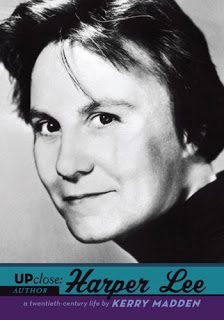 New Low-Residency MFA Program in Writing for Young People from Antioch University in Los Angeles: “Author Kerry Madden will be teaching as Associate Faculty in this new MFA at Antioch, which will begin this December. Antioch hopes to recruit an initial cohort of at least six outstanding writers in this genre.” See more information.

Illustrator Patrice Barton by Kathy Temean from Writing and Illustrating. Peek: “Patrice Barton says her artistic talents were first discovered at the age of three, when she was found creating a mural on the dining room wall with a pastry brush and a can of Crisco.” Note: in-depth look at Patrice’s process for several of her books, from sketches on.

Conflict vs. Tension by Becca Puglisi from The Bookshelf Muse. Peek: “Conflict should create tension. But it doesn’t, not all the time. I think of the movies my brother-in-law likes to watch, where things are always exploding and I couldn’t care less. Lots of conflict. No tension.”

What Does an Agent Do with agent Sara Crowe of Harvey Klinger agency and author Dan Wells from Writing Excuses. Note: about 15 minutes; an audio interview. Source: They Call Me Mr. V. See also a previous episode featuring Sara on Query Letters.

Pre-revision: Before You Break Out the Red Ink by Danyelle Leafty from QueryTracker.netBlog. Peek: “The revision process is where I take that world teeming with life and shape it into something even more wonderful. It’s the place where I step out of the story and am myself again.”

Writing Workshop Report by Laura Atkins and Ann Perrin from Laura Atkins’ Blog. Peek: “I liked the writing exercise about how the wolf might eat grandma the very best. I think it bought out the child in us all.” Note: Laura is Cynsations’ U.K. reporter. 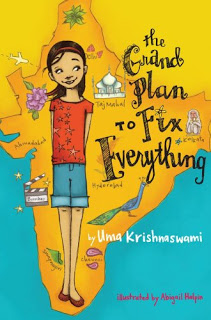 The Art of Revising: Macro Revision by R.L. LaFevers from Shrinking Violet Promotions. Peek: “…revising is not the same thing as polishing. Polishing is about smoothing and shaping what you’ve got on the page. Revising is about really looking at the story and seeing if it’s working.”

Don’t Get Slighted by Jan Fields from the Institute of Children’s Literature. Note: “How careful use of conflict and theme can keep you from ever being told your story is too ‘slight.'”

Revise Grand Entrance Scene to Set Up a Character Relationship by Darcy Pattison from Fiction Notes. Peek: “Think about a stage play, where a character sweeps onto stage commanding the attention of the audience. It’s a first look at the character and sets the tone for everything that follows.”

Fear, Rejection & Writer’s Block by Gene Perret from QueryTracker.netBlog. Peek: “There’s no such thing as cab-driver’s block, or plumber’s block, or librarian’s block. There’s only writer’s block because we’re the ones who sometimes begin our task afraid that it will be rejected.”

Fantasy in a Post-Potter World by Elizabeth Bird from A Fuse #8 Production. Peek: “So what is the state of modern fantasy today?  I’m still reading everything I can, and not just fantasy, but I’ve seen a nice swath of titles.  They give me a sense of how things have changed since Harry took his final trip to Platform 9 3/4.” 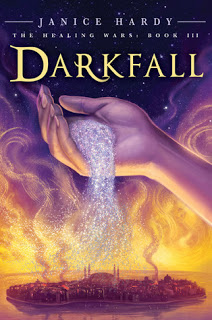 Tips on Plotting Your Novel by Janice Hardy from Chris Eboch at Write Like a Pro! Peek: “Story ideas can come from anywhere, and those are the easy part of writing. It’s figuring out what to do past that glimmer of an idea where it can get tricky.”

Notes from the Career Development Desk by Jennifer Laughran from Jennifer Represents. Note: Jennifer muses and seeks advice for a southerner looking to break into NYC publishing. Don’t miss the comments.

My Imagined SCBWI Five Minute Keynote by Lee Wind from I’m Here. I’m Queer. What the Hell Do I Read? Peek: “Just as African-American children and Asian children, disabled children and foreign children, Latino children and Jewish children, fat children and deaf children, and every other group of ‘other’ children do, gay, lesbian, bisexual, transgender, and questioning children need that moment of seeing themselves reflected in the books they read.”

Celebration of Realistic YA Fiction is ongoing from Beth Fehlbaum. She offers reading recommendations with a synopsis, author information, and bookstore suggestions.

You’re Kind of a Big Deal by C.J. Redwine from The Last Word. Peek: “You know what other secret ingredient is required? Guts.” Note: highly recommended to writers pursuing their first contract (and everyone else). Source: QueryTracker.netBlog.

Things I Never Considered About Being a Writer by Lisa Gail Green from Paranormal Point of View. Peek: “I was an actress for a time, so I’m no stranger to the whole expect rejection thing. But this is different. For one thing, it takes more time to get that rejection, which is probably what I personally have had the hardest time with.” 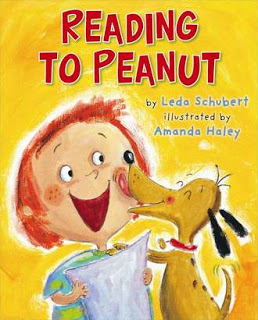 Congratulations to Leda Schubert on the release of Reading to Peanut, illustrated by Amanda Haley (Holiday House). From the promotional copy:

Lucy has a special reason to learn to read and write.

Mom and Dad help Lucy by making word-and-picture signs that she attaches to objects, just like her teacher does in school. Lucy draws a picture on a sticky note, Dad writes D-A-D, and Lucy sticks it on his nose. Her dog, Peanut, chews it.

Peanut chews all the signs—Mom, beans, peas, corn, and more.

After learning many words with the sticky notes, Lucy reveals her secret! She has learned to read and write to make a special birthday card for Peanut.

Kirkus Reviews says, “A strong choice for school or home reading. Nicely captures the excitement of learning to read and write, complete with the feeling of accomplishment that ensues.”

Faculty has been announced for the Austin SCBWI Annual Regional Conference from Feb. 17 to Feb. 19 at St. Edward’s University and The Writing Barn in Austin. Registration opens Sept. 1.

The program will include “professional consultations, one-on-one critiques, portfolio reviews and displays, wine and cheese socials, public readings, small group intensives, a full-day YA intensive, and an autograph party.”

The 90-Second Newbery Video contest will be curated by author James Kennedy and librarian Betsy Bird. The challenge: “make a video that compresses the story of a Newbery award-winning book into 90 seconds or less.” James writes: “We’re planning a star-studded 90-Second Newbery Film Festival at the New York Public Library on Nov. 5. And at the Chicago Public Library on Nov. 16.” Deadline: Oct. 17; see more information and a sample below. Note: I’ve previously run this video, but it’s well worth another look.

“A Wrinkle In Time” In 90 Seconds from James Kennedy on Vimeo.

Check out the book trailer for There Was an Odd Princess Who Swallowed a Pea by Jennifer Ward, illustrated by Lee Calderon (Marshall Cavendish, 2011).

Are you interested in the difference between writing a prose and graphic novel? Or how to translate one to the other? Going Graphic by Cynthia Leitich Smith from Hunger Mountain: A VCFA Journal of the Arts. Note: a discussion of my process re-envisioning Tantalize, a prose novel originally published by Candlewick in 2007, as Tantalize: Kieren’s Story, a graphic novel illustrated by Ming Doyle and available later this month, also from Candlewick. Peek: “Here’s a look at the same scene in prose, script, and graphic format. Even allowing for the point of view shift, the difference in text length is apparent.”

I’m honored that my essay “Isolation” will appear in Dear Bully: 70 Authors Tell Their Stories, edited by Megan Kelley Hall and Carrie Jones (Harper, September 2011). Hazel Rockman of Booklist writes: “With authority often turning a blind eye and cyber-bullying rampant, this timely collection is an excellent resource, especially for group discussion, and the appended, annotated list of websites and further reading extends its usefulness.”

Interview with Cynthia Leitich Smith by Kati from Jagged Edge. Peek (regarding Rain Is Not My Indian Name (HarperCollins, 2001): “I’m a huge fan of Katherine Paterson’s Bridge to Terabithia and other books like it that end on a moment of hope for healing. I wanted to take the next step, picking up Rain’s story six months later and considering it as a process rather than a destination.” See also an online extension to the novel and teacher guides.

The winner of an author-signed bookmark and copy of Bumped by Megan McCafferty (HarperTeen, 2011) was Ashley in Ohio. Congratulations to Ashley! Thanks to Megan and all who entered! 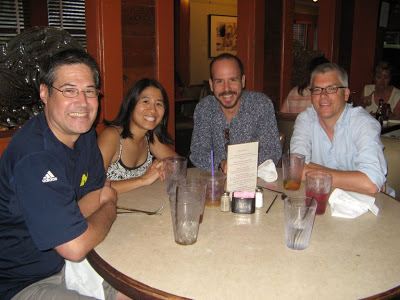 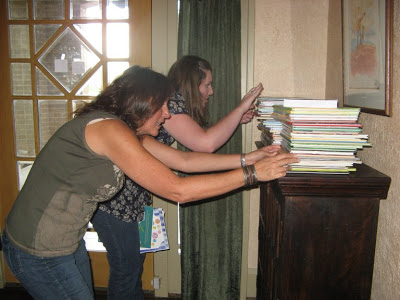 Greg and I also hosted a reception and gave away 350 picture books (review copies) to Dr. Nancy Roser‘s The Art of the Picture Book class at the University of Texas; see the full event report! See also Just a Note of Gratitude by Caroline from Sweet Talks–Books, which includes a photo of some of the books she brought home! 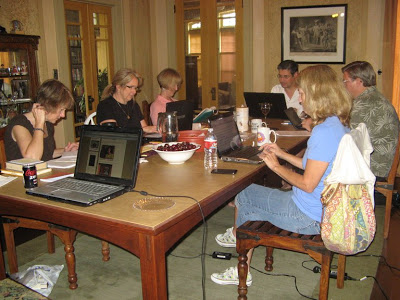