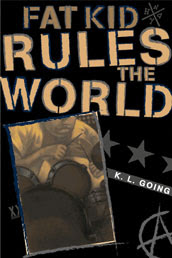 Could you tell us about the movie based on your 2004 Prinz Honor Book, Fat Kid Rules the World (Putnam, 2003)? How did this come about?

It’s been a long journey, but from what I understand, that’s pretty common. The book had been continually under option since it first came out, but finally all of the pieces fit together.

I’ve got a great team working on the film, and I’m so happy about that. Whitewater Films and Whippany Park Productions are producing, and Matthew Lillard (“Scream,” “Scooby Doo”) is making his directorial debut. Jacob Wysocki (“Terri”), Matthew O’Leary (“Natural Selection”) and Billy Campbell (“The Killing,” “The 4400,” “The Rocketeer”) will star in the lead roles. Mike McCready of Pearl Jam has agreed to score the film. The movie is filming right now in Seattle!

To what extent were you involved in the production?

I didn’t make any content decisions, such as script choices or casting, but the people involved have been great about keeping me in the loop every step of the way.

What’s been the biggest surprise for you since the filming started?

I think the biggest and best surprise has been the casting. It’s amazing the way they’ve found actors who are exactly the way I pictured the characters. When I saw one of the first batches of photos from the set I nearly cried. It was just incredible to see scenes from the book depicted so realistically. And each of the lead actors is so talented! I feel truly blessed.

Have they made any changes from book to film?

Yes. There are some changes. Curt’s name has been changed to Marcus, for example, and they’ve added two other characters who will play larger roles. But they’re sticking very true to the spirit of the book, and for that I’m glad.

How can fans of the book support the film?

The main thing people can do is go to the movie’s Facebook page and hit the “like” button. Then share the link on your own profile page. We’re really trying to get the word out about the film.

Since this is an independent film, the more people who get involved and show their support, the more likely we are to find a distributor who will put this film into theaters.

In addition to helping us out, if you visit the Facebook page, you’ll have a chance to see lots of great photos from the set, read the blogs of several crew members, and check out the awesome music that fans are posting on the page.

You can also follow me and the movie on Twitter: @KLGoing and @fatkidmovie. Thanks in advance, everyone!

You last visited Cynsations in December 2009 to talk about Writing and Selling the YA Novel (Writer’s Digest, 2009). Could you update us on your writing life since?

Sure! I published one other novel around that same time, called King of the Screwups (Houghton Mifflin Harcourt, 2009).

This is the story of Liam, the drop-dead gorgeous son of a fashion model, who desperately wants to be a nerd. When he’s kicked out of his house and sent to live with his glam-rocking uncle who lives in a trailer park in upstate NY, he sees it as his opportunity to reinvent himself.

I’ve also sold several picture books, and the first one is due out next summer. It’s called Dog in Charge, and I’m lucky enough to have the fabulous Dan Santat as illustrator.

Photo of K.L. by Joanna Bretstein.