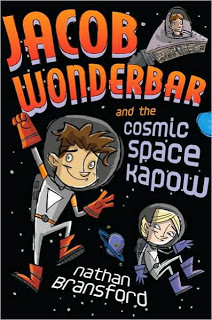 Nathan Bransford is the first-time author of Jacob Wonderbar and the Cosmic Space Kapow (Dial, 2011). From the promotional copy:

Space travel is all fun and games until someone breaks the universe.

Jacob Wonderbar has been the bane of every substitute teacher at Magellan Middle School ever since his dad moved away from home. He never would have survived without his best friend Dexter, even if he is a little timid, and his cute-but-tough friend Sarah Daisy, who is chronically overscheduled.

But when the trio meets a mysterious man in silver they trade a corn dog for his sassy spaceship and blast off into the great unknown. That is, until they break the universe in a giant space kapow and a nefarious space buccaneer named Mick Cracken maroons Jacob and Dexter on a tiny planet that smells like burp breath.

The friends have to work together to make it back to their little street where the houses look the same, even as Earth seems farther and farther away.

When I was younger I was really drawn to book where kids were thrust into difficult situations on their own and had to figure out how to be responsible and/or survive, and that was really important to me as I wrote Jacob Wonderbar and the Cosmic Space Kapow.

When you’re in the 8-12-year-old age range, I feel like you’re just beginning to think of yourself as your own person and beginning to look ahead to what life will be like when you’re a grownup and making decisions and being able to survive on your own.

With that new sense of self, I think kids are also really beginning to have a thirst for exploration, excitement, and confronting danger.

At the same time, you’re still a kid! And kids at that age have a tremendous appreciation of fun and wackiness. Your imagination is still a powerful part of who you are as a kid, and you’re still willing to suspend your disbelief. The world (or should I say universe) really seems like a place where anything is possible.

So all of those things came together for me with Jacob Wonderbar and the Cosmic Space Kapow. I tried to infuse it with a sense of fun and wackiness and the universe is a place where you can blast off into space and get marooned on a planet where the days are just a minute long, but underlying the silliness is some seriousness, as Jacob is wondering if his absent dad could be in space. As much as the kids want to have fun adventures, real life can’t help but intrude.

While I was writing, I was most influenced by the books I liked at that age, Roald Dahl especially, whose entire canon I read when I was in fourth and fifth grade, and whose protagonists were often orphans or had terrible parents. Underlying the flights of fancy was an escape from life’s painful realities.

I also loved the Calvin & Hobbes comic strip by Bill Watterson, and the title of Jacob Wonderbar and the Cosmic Space Kapow is a bit of an homage to “Hamster Huey and the Gooey Kablooie,” the book that Calvin always demanded his parents read him at bedtime.

It’s not easy! I find it especially difficult to come home after a long day at work and then sit down at the computer to write into the night. So I try and carve out days on the weekends, but that also can be challenging, because it’s difficult to recharge for another week if you’re never taking a break.

For anyone juggling jobs and family obligations and a social life, I feel like life as a writer is a perpetual search for balance, and it’s not easy to find.

I guess the most important thing I’ve learned over the last few years is that family and friends have to come before writing. Writers are dreamers, and I think we can talk ourselves into the idea that getting published or having your book take off is going to make your life complete and if you can just do that it will make all of the other problems in life go away and then you can calm down and be happy.

But it’s really not the case – if you’re not living a happy life prior to being published, being published is not going to be the thing that suddenly makes you happy. Yes, it’s something you’ll be always proud of and something no one can ever take away from you, but it’s not a magic elixir that cures everything.

At the same time, we write because we love it, and the satisfaction of sharing part of yourself and completing a novel and having people read it is something that can’t be replaced. It’s worth making time for. It’s worth late nights and early mornings and spending time in front of a computer when you’d rather be out frolicking in the sun.

Just as long as it doesn’t stop you from living a happy life outside of writing.

Nathan’s blog offers extensive information on publishing as a business, finding an agent and query letters, working with agents and editors, and the writing process.