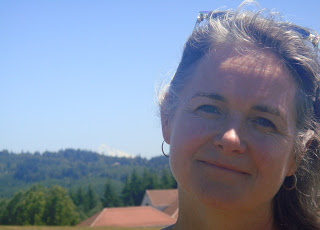 A journalist for ages, and a “maman poule” (mother hen) for forever, Erzsi Deàk launched Hen & Ink Literary when a golden egg presented itself in the guise of Siobhan Curham‘s Dear Dylan in November 2010.

In her earlier incarnations, Erzsi covered fashion and children’s features from Alaska to San Francisco to Paris. She has tramped the Alaska Pipeline looking for environmental problems, worked as a camp counselor, managing the craft hut, and always as a writer.

In addition to writing about flowering spaces and urban fowl, Erzsi scouts for great literary works for the French publishers, Editions de La Martinière Jeunesse and Le Seuil Jeunesse, part of the La Martinière Groupe. She also edits the SCBWI Bulletin “Here, There, Everywhere” column that shines a light on children’s books around the world.

But her bright and shiny project is Hen & Ink Literary and her favorite food may very well be most things starting with A, or at least artichokes and avocados.

What led you to specialize in youth literature? Could you give us a snapshot of your career?

Whether working in a bookstore and spending all my earned income on children’s books (I might possibly have been the store’s best client…), studying children’s lit at the University of Oregon, or writing my own stories, I have always been attracted and involved in children’s books on some level.

Risking the vampire analogies, this was definitely a vein of literature I tapped into early on! And that was before YA officially existed.

Prior to my job at the bookstore, I bought out the Scholastic Book Club’s pregnant-girl books — all of them (think: Mr. & Mrs. Bo Jo Jones by Ann Head (Signet, 1968); Too Bad About the Haines Girl by Zoa Sherburne (William Morrow, 1967); My Darling, My Hamburger by Paul Zindel (HarperTrophy, 1969)– those were the days, eh!?

Now we have doom and gloom/shadows and darkness, and in those days it was the ideally vicarious thrill of someone else’s mistakes in broad daylight (and The Outsiders by S.E. Hinton (Viking, 1967)) that provided the shiver. But I digress.

My career has been very outside the box. While working at the bookstore, I also worked at the Fairbanks News-Miner as the Youth Page Editor. Then I took advantage of that money-making machine, the Alaska Pipeline.

I worked in television after college (NBC in New York) and was thankful to escape to the Bay Area, where I worked in advertising before moving to France. There, I wrote articles on the fashion world for small rags in the Bay Area (my front page article for the San Jose Mercury-News Travel Section was locked in the post office in the Marais for a couple of weeks due to one of the endless strikes in France; needless to say, the deadline came and went and so, sadly, did my Mercury-News career).

After a stint of price reporting on the petro-chemical industry and some freelance copywriting, I found myself permanently in Paris. In 1996, I launched the SCBWI France chapter, and in 2001 became the international rep for the organization, growing the international presence to some 28 territories and sponsoring projects like the U.K.’s Undiscovered Voices project and eventually organizing and running the SCBWI Bologna conference.

In 2008, I stepped aside to let Kathleen Ahrens and Angela Cerrito run with the international baton, and in 2009, I teamed up with La Martiniere Groupe, building their new DLMJ list of imported titles. Today, I still work with them on two imprints, DLMJ and Le Seuil Jeunesse.

And then came Dear Dylan. I’d been thinking about agenting for 20+ years, but being in Paris and having a resume that wasn’t exactly a straight ladder, I’d hesitated.

But no more! Response has been very supportive, and we’re clucking happily here at Hen & Ink.

What inspired you to become a literary agent?

I’ve always been an advocate for others (in high school I actually wanted to be a labor negotiator!), so agenting is an extension of this. Being an agent allows me to shout about projects and people I love but to also work with said projects and people to get them to that “lovable” point.

Working only as a consultant and scout with the French publisher, I missed the pulse of hand-on editorial work. Agenting allows me to fluff my mother hen feathers and sharpen my red pencil.

Why found your own agency instead of joining an existing one?

I’d happily have joined an agency a few years ago, but after working independently and across various oceans, it wasn’t likely to happen.

Imaginations can be limited, so if on paper, you look one way, many won’t stretch to see you might be that square peg/round hole mix.

How does Hen & Ink stand out from other literary agencies? What makes it special?

I like to say that Hen & Ink is a literary studio with a twist. We aim to work in the traditional publishing arena, but also to encourage and develop work across cultural borders, genres, and media, bringing my 25+ years experience on the international stage, connecting individuals and companies with those around the globe who can make things happen – no matter where you find yourself.

I meet often with publishers in the U.S. and U.K. and aggressively market domestic and foreign rights, attending the Bologna, London and Frankfurt rights fairs. I see Hen & Ink as an opportunity to push the boundaries of our ever-changing transmedia world and connecting people across borders and genres. I’m particularly excited about our growing partnerships, a loose consortium of companies and individuals there to meet the needs of our clients.

(Partners include SheepSpot Creative, which creates book trailers and more, and Raab Associates, which specializes in children’s-YA book marketing and publicity.)

How long have you been in publishing? In your view, how has the industry changed?

Depends on what you consider “in publishing.” As Richard Nash recently said at the Writer’s Digest conference in January, “The business of writing is the business of reading.”

I’d say that I’ve always been in it, either as a reader, bookseller, writer, editor, networker, editorial consultant, scout, and now as an agent.

Would you describe yourself as an editorial agent, one who comments on manuscripts, or one who concentrates more exclusively on publishing issues? Why?

Both. I love the brainstorming and process of working with an author and a project, but I like finding the perfect fit between publisher and author (and working the contract).

Is your approach more manuscript by manuscript or do you see yourself as more of a career builder? Why?

Career builder. I’m not interested in one-off projects — if I can avoid them. I want to work with creators for a long, long time, building strong foundations and chateaux (castles) in the world of children’s literature!

Will you be providing promotional support to your author/clients?

As much as possible. We are creating a blog for the clients to participate in, providing creative options for promotion via our partnerships and generally, talking up our people!

What do you see as the ingredients for a “breakout” book in terms of commercial success, literary acclaim or both?

Outside of good crystal ball, I think it’s the usual: Amazing voice, language and plotting. To find the sweet spot of what makes for a commercial literary gem is the goal.

But I’d add, serious honesty in the prose, an ability to use social media to the best end and not being too shy to talk about oneself.

The world is a loud place these days, and each author/illustrator needs to find her/his own voice and make sure it is heard above the clamor.

It’s rare that an author may be allowed to be retiring or shy and assured of any kind of success.

I just hope authors can allow themselves the luxury to actually create amid the noise.

What sorts of manuscripts appeal to you?

Basically, well-written, well-crafted, well-worked books that are not didactic. I respond well to work of any kind that is balanced with a sense of urgency and humor and takes the reader on an adventure — whether in the literal sense or in the emotional sense.

I want to feel and be touched by the work, laughing, crying, sighing, guffawing, gnawing. I suppose I’m looking for work that makes me feel alive as a reader. Even if I’m sitting in an armchair or lying on a beach towel.

That said, I invite those who might wish to submit to check out my submissions guidelines, as there are a few things, but particularly picture books or poetic mood pieces of over 1000 words can send me round the bend.

More specifically in the positive, I’m open to sparely-written picture books through adult, with a focus on children’s and YA/crossover.

I like graphic novels. I don’t care where the setting is, nor what color the protagonist is as long as its a compelling story and the setting and race make sense.

Genre? By the time this is read, it’s probably time time to find a new genre. The thriller is a big deal now, and not just because of that dragon tattoo.

I work with author-illustrators.

Are you accepting queries? With or without a referral? If so, what do you require, and what’s the best way for a prospective client to get in touch with you?

Please note that queries over 500 words will not be considered. I’m asking that authors query first in a succinct way and only send their work when requested.

Normally, I accept queries from October to May of each year and am closed to queries from May to September. However, in 2011, I’m accepting queries until June 15 (and thus, will be closed from June 15 to September 2011).

Do you have any additional submissions preferences or pet peeves?

Not addressing specifically to me or Hen & Ink (i.e., just writing the email like it’s a shopping list).

Not signing with a real name (in other words, leaving me to divine who you are).

Not following the guidelines. By trying to blaze their own path, these people slow it down for everyone else, so I’ve sadly had to just toss those that don’t follow the guidelines, risking missing out on great stuff, but the volume is far to high to do otherwise.

How much contact do you plan to have with your clients? What’s your preference–emails, phone calls, a listserv? What kind of relationship are you looking to build and why?

I’m all about communication and making sure each client feels heard and tended! Email is the best for now though I communicate by phone if necessary. I’m looking to build a strong professional-relationship-verging-on-friendship. A definite working marriage!

As a reader, which children’s-YA books have you enjoyed lately and why?

My current list of favorite reads includes Siobhan’s recent books to come out with Egmont and these titles:

The support for Hen & Ink from all arenas has been great. The children’s book world is no longer a small pond, and, as the airlines say, you could choose to fly with someone else.

I very much appreciate those who choose to fly with Hen & Ink — whether they be creators or publishers.

See also A Chat with a Cool Chick Erzsi Deàk on Hen & Ink from Melissa Buron.

Erzsi will be speaking on “Pitching Your Work in the Global Market” at 10:45 a.m. Sunday, Aug. 7 at the SCBWI Summer Conference in Los Angeles. Peek: “Hitting the high notes — pitches that stop traffic (and create contracts). A mini workshop for writers, illustrators, and anyone who needs to pitch – and sell – a project in under three minutes. What works and what doesn’t from New York to Bologna and back again. Bring your pitches and be ready to sell us on your ideas – with or without Colin Firth in the starring role.” 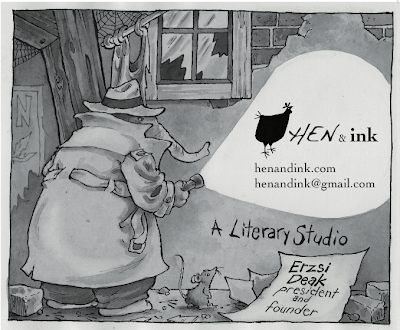