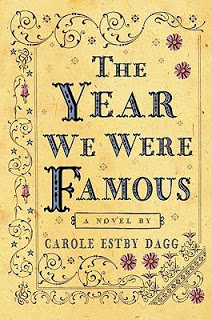 Carole Estby Dagg is the first-time author of The Year We Were Famous (Clarion, 2011). From the promotional copy:

With their family home facing foreclosure, seventeen-year-old Clara Estby and her mother, Helga, need to raise a lot of money fast—no easy feat for two women in 1896. Helga wants to tackle the problem with her usual loud and flashy style, while Clara favors a less showy approach.

Together they come up with a plan to walk the 4,600 miles from Mica Creek, Washington, to New York City—and if they can do it in only seven months, a publisher has agreed to give them $10,000.

Based on the true story of the author’s great-aunt and great-grandmother, this is a fast-paced historical adventure that sets the drama of Around the World in Eighty Days against an American backdrop during the time of the suffragist movement, the 1896 presidential campaign, and the changing perception of “a woman’s place” in society.

It helped that I was born nearly 20 years closer to 1896, the year of Great-aunt Clara Estby’s 4,000-mile walk with her mother, than to the current day. I have lived a good part of my life in houses built soon after the time of my story, with flour bins, wood stoves, and closets that assumed you had only three changes of clothes. I also had my own memories of Clara, who narrates The Year We Were Famous.

Intrigued by wondering what it was like to walk across America then, I spent a lot of time with old railroad maps that showed every whistle stop. Reconstructing a mile-by-mile, 232-day itinerary was tedious, but inspired several plot points.

Why, for instance did they detour to Cripple Creek when they knew they were behind schedule? How would they have felt about walking across the Umatilla Indian Reservation?

Newspapers articles were my greatest story prompts. Even with the help of librarians across the country I only found a dozen articles, but what tantalizing tidbits they contained! One-liners mentioning shooting an assailant, meeting President-elect McKinley and his wife in their home, nearly losing their lives in a flash flood, being lost for days without food or water, demonstrating their curling iron to Indians they met along the way—all blossomed in my imagination to whole chapters.

Pictures on the internet and in books and seeing some of the places Clara saw also inspired scenes. For instance, a postcard of Mrs. William McKinley in her parlor that I purchased off the Internet gave me the setting for the scene where Clara and her mother meet the next president.

Driving part of the route, I stopped by a little museum in Rawlings, Wyoming, where I found out about an early woman doctor who inspired my Dr. Holmes in another chapter.

As an old-time librarian, I used to think of research as something you did with books. In writing The Year We Were Famous, I discovered that material is where you find it, on-site with your camera, tiny museums, the Internet, and even e-Bay. 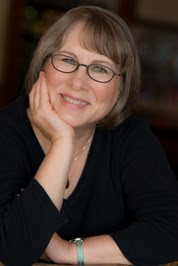 What inspired me first were the real-life characters, Clara Estby and her mother Helga, my great-aunt and great-grandmother. In 1896, they walked from their farm in Mica Creek near Spokane, Washington, to New York City to win money to save the family’s farm—and to prove women could do it. It took them over seven months, wearing out 32 pairs of shoes between them. That story needed telling!

As I started research, I realized what a pivotal time 1896 was. It was three years after the Panic of 1893, which was as disastrous as the Great Depression. It was the year of the historic presidential race between William Jennings Bryan and William McKinley.

By then, four states (Wyoming, Colorado, Utah, and Idaho) had just allowed women to vote and the suffrage movement was gathering momentum.

To get into that world, I made an enormous sacrifice. For a year, I forswore all reading by living authors and read only books Clara might have read for high school classes or for pleasure. I read diaries of women of the 1800s. I put on white gloves to page through the fragile pages of women’s magazines of the 1890s. I even read dime novels which I found in entirety on the Internet. That florid dime-novel writing informed the style Clara adopted for writing about shooting an assailant in Oregon and helping her mother demonstrate a curling iron to Ute Indians they camped with.

From first rejection slip through publication was fifteen years. My inspirations for not giving up were Clara and Helga, who just kept walking one step at a time until they reached their goal.

12 thoughts on “New Voice: Carole Estby Dagg on The Year We Were Famous”