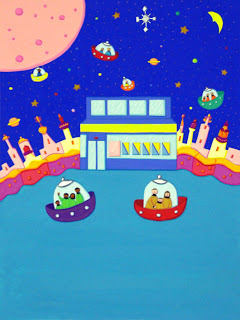 The panel was created for the picture book Supermarket by Kathleen Krull (Holiday House, 2001).

The annual art raffle benefits the Texas Library Disaster Relief Fund, created to assist libraries in our state as they recover from natural disasters.

The raffle will be April 14 during the second general session of the TLA Annual Conference in Austin. A ticket form is available for those who will not be at conference (mail by April 4); and tickets will be sold in the 4th Street Lobby of the convention center and and at various events at the conference: $5 each or five for $20.

Let’s get to know this talented author-illustrator! Melanie, could you tell us about your illustration career?

“Everyone Belongs,” a poster designed for the Children’s Defense Fund, and chosen by its president, Marian Wright-Edelman, was in print for over a decade.

My illustrations have also been published by the Southern Poverty Law Center, AFL-CIO and the NAEYC (National Association for the Education of Young Children).

The first trade picture book I wrote and illustrated was released in 1989. I’ve since illustrated 16 picture books and wrote six of them. They have won many awards and honors. The one titled, Mermaids On Parade (Putnam, 2008), is now representing Coney Island on the Brooklyn Public Library website’s A Literary Map of Brooklyn.

I’ve served on the SCBWI NY Metro steering committee for over 15 years.

What inspired you to donate a piece of your art to TLA?

Jeanette Larson, who originated the raffle, emailed me in November of 2009, asking for a donation. I had no idea that a TLA Disaster Relief Fund existed. Jeanette walked me through the initial steps and has been an enormous help throughout.

I really like the idea of a raffle. Most people can afford to get a ticket and (hopefully) win original art while helping libraries at the same time. It’s win/win/win.

I felt inspired by the theme of the conference, “Libraries Crossing Boundaries; Bilbliotecas cruzando fronteras.”

That is how I choose the original picture book illustration to donate. “Space Age” depicts a supermarket in the year 3000. I like the idea that a building from the current era is juxtaposed into a future era. 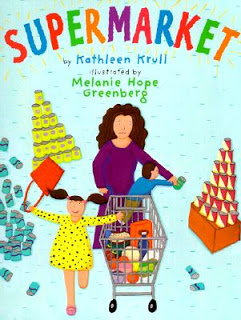 The art is quirky, bright, colorful and fun. I paint with gouache, which is thick opaque paint with a glow. The ancient-modern buildings in the illustration’s background are straight out of Antonio Gaudi’s park in Barcelona. I had visited there once, it was memorable.

What ties in perfectly with choosing art to fit the conference theme is that “Supermarket” turns ten-years-old in print this year. I want to celebrate that and have a chance to breathe new life into an existing book on the back-list.

I will be signing copies of “Supermarket” at the Holiday House booth on April 14, 2011 from 10 a.m. to 11 a.m. at the Texas Library Association Conference in Austin.

Online, I have a wonderful interactive visual resume of my career.

Also, a new blog to sell my original art, over 1600 illustrations created, which are collectibles.

I’ve created a list for easy-to-find links to all my online activity. 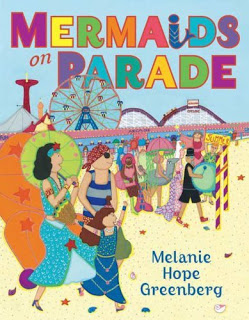 There are some bookstore signings coming up in Brooklyn. I’ve been submitting new picture book projects for publication and working on more new projects in various early stages.

I also hope to march in the Mermaid Parade again for the Summer Solstice. Maybe I will see you there.

Book Melanie for school visits outside the NYC area.

4 thoughts on “Author-Illustrator Interview: Melanie Hope Greenberg & Take a Chance on Art at the TLA 2011 Raffle”