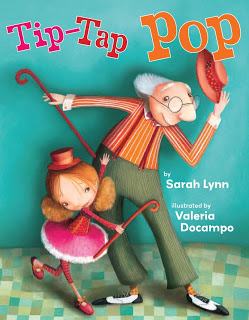 Sarah Lynn is the first-time author of Tip-Tap Pop, illustrated by Valeria Docampo (Marshall Cavendish, 2010). From the promotional copy:

Emma and her grandpa, Pop, are tap-dancing pals. They dig-shuffle-chug through town and put on a clickity-clacking, tip-tapping show every year on Emma’s birthday. But Pop is getting old. He starts forgetting things, even Emma’s birthday. And he stops dancing.

Endearing illustrations rendered in gouache and pencils show that even the smallest act may spark a memory in an Alzheimer’s sufferer.

What is it like, to be a debut author? What do you love about it? What are the challenges? What has come as the biggest surprise? In each case, why?

For me, being a debut author was a strange combination of exhilaration and feeling like a complete faker. Like I’m not really an author! Please, me? No way.

That might seem to be a strange reaction since I’ve been working toward this goal for pretty much my whole life! I played around with writing as a child and teen, and then more seriously after I became a mother myself.

It’s funny because when I’ve gotten rejections I always felt like somehow the editor didn’t get it. If she truly had vision, she would’ve wanted it, right?

But then when things flip and an editor does want a manuscript, I get this feeling of disbelief. Like how could they possibly want it? No one else did.

Okay, so I’m exposing myself as a pessimist (at least as it relates to my own endeavors.)

What I love about being a debut author is that it’s given me some faith in the process. That if I keep on plugging away, eventually something will work out.

Plus, it is amazingly cool to see someone else’s illustrations bring your story to life! I remember at first I was surprised because of course it wasn’t exactly how I’d envisioned it.

But then I totally fell in love with the illustrations. I think it was brilliance on the editor’s part to pick an illustrator with such a fun whimsical art for my story, especially because it allowed me to present a serious topic in a light and fun way.

I’d say the challenges are with marketing. For a naturally shy person such as myself, it is difficult to do a lot of marketing or self promotion… but I’m stretching my wings.

In terms of my biggest surprise, I’d say it was when the editor sent me rough drafts of the illustrations and asked for my input. What a nice surprise!

The original dance class scene had only little girls shown. Being a mom of all boys, I definitely wanted a little boy represented. I mentioned it, and the next time I saw the illustrations, there was a boy in the dance class.

As a picture book writer, you have succeeded in a particularly tough market. What advice do you have for others, hoping to do the same? 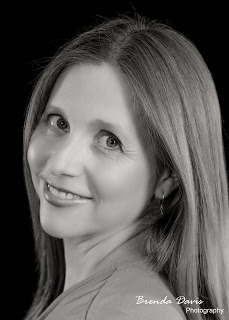 It is a tough market! I think the key is mindset.

You have to know that it’s not just about writing a good picture book.

It’s about writing a good picture book that fills an unfilled niche and is marketable.

When my kids and I walk into a bookstore, they make a beeline for the commercial picture books. (I won’t name names, but the books that are created after popular televisions shows, superheroes or abnormally large reptiles.)

Those books take up so much shelf space at many mainstream bookstores, and they grab the attention of the young readers. This makes it even harder to write a marketable picture book.

My advice would be as follows:

2) I’d also advise being open to editing suggestions. You can always save old versions, so you don’t lose anything by trying it a new way.

3) For picture books, especially, less is more. It is difficult to write tight prose, but as a parent, it is much more fun to read a book like that than one that is overly wordy.

4) I’d also say to be willing to revise until your eyes cross. I had no idea how much revision is involved in writing a good text. I thought Tip-Tap Pop was finished about twenty versions before it was actually finished.

5) Consider other people’s feedback, but don’t lose sight of your own vision.

6) And finally, write for yourself, not just to get published. Try to enjoy the process of it all, not just the end result. 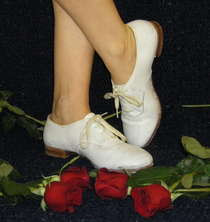