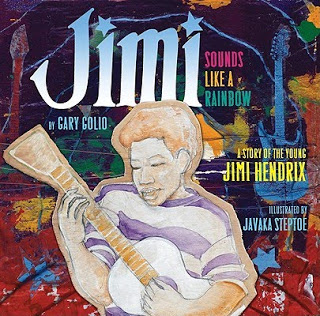 Gary Golio is the first-time author of Jimi: Sounds Like a Rainbow: A Story of the Young Jimi Hendrix, illustrated by Javaka Steptoe (Clarion, 2010). From the promotional copy:

Jimi Hendrix was many things: a superstar, a rebel, a hero, an innovator. But first, he was a boy named Jimmy who loved to draw and paint and listen to records.

A boy who played air guitar with a broomstick and longed for a real guitar of his own.

A boy who asked himself a question: Could someone paint pictures with sound?

This a story of a talented child who learns to see, hear, and interpret the world around him in his own unique way. It is also a story of a determined kid with a vision, who worked hard to become a devoted and masterful artist.

Looking back, were you surprised to debut in 2010, or did that seem inevitable? How long was your journey, what were the significant events, and how did you keep the faith?

Sometime around 2002, I first came upon Wendie Old’s picture book To Fly (Clarion, 2002). It was 48 pages, illustrated by Robert Andrew Parker (an artist I greatly admire), and a beautiful meld of story and image. 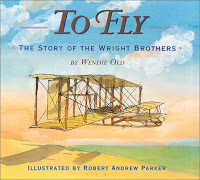 Out of work at that time, I was playing a good deal of electric guitar—a passion of mine—and began delving deeply into the blues. Wherever I looked, it seemed, there was Jimi Hendrix, so I began reading the classic tome on his life, Electric Gypsy (1995).

Reading through the eyes of my talented wife (children’s book author Susanna Reich), I was moved by the tender details of Jimi’s childhood, and began to imagine a story for kids that was both inspiring and child-friendly.

In secret, sitting at my desk in our library (shared with Susanna), I began writing what I thought was a picture book text—which eventually topped out at 6,000 words.

When Susanna found out what I was doing, she raised her eyebrows and most likely questioned my sanity: Jimi Hendrix…for kids? 6,000 words?

No matter. It was now 2003, but I held tightly to my naïve vision of a 48-page picture book (like Wendie Old’s), which would be marketed to “older kids.” In truth, I had little idea of what I was doing, though there is often a saving grace in that.

I showed it to an agent, who told me it was well-written, but clearly not a picture book text. So I revised it—down to 3,500 words—and insisted on cutting it no further. At this point, I was given the name of an editor with an interest in rock and roll, and sent it off.

Her assistant editor contacted me (the head editor was on maternity leave), and expressed interest herself, asking for another revision—done over the course of six to eight months—to bring the text down below 2,000 words.

I was happy, she was happy, and her boss (now returned from maternity leave) was happy…but—long story short—over the course of several editorial committee meetings, the publisher and his marketing person nixed the idea altogether: How would they ever sell Jimi Hendrix in Ohio?

Dispirited and angry (it was now 2004), I began working on another picture book text—this time, about the young Bob Dylan (Little, Brown – May ’11)—and found my present agent.

He believed in my vision for both books (he’s an avid Dylanophile) and began sending out the Hendrix manuscript to picture book editors. We had so many different responses—from “you can’t do a picture book on Jimi Hendrix!” to “we’d prefer a more conventional biography,” to “we like it, but….” So many buts.

But I persisted—buoyed by my agent’s constant reassurance—and eventually landed my present editor, the incredible Lynne Polvino of Clarion, bassist in a punk band and Vision Shaper Supreme.

With Lynne’s help, we focused the story more tightly on “this boy who loves sound and color,” and revised the manuscript once again—several times, in fact—until we were both satisfied with it. On Lynne’s first pitch to her boss, the book finally sold to Clarion (Wendie Old’s publisher!) in June of 2006.

But the story doesn’t end there. Illustrator Javaka Steptoe—applying his own vision to the task—began visiting Seattle, working with elementary kids in the city schools, and devising a process—carved, collaged, painted and silkscreened images on recycled plywood from Jimi’s hometown—to create his masterful spreads for the book.

Three years later (in September 2009), he turned in the finished work to oohs and aahs from the Clarion staff and my agent (I’d still not seen anything).

With the revising and proofreading now complete, there followed galleys, color proofs, F&G’s, and an eventual paper-on-board hard copy in Spring 2010.

In October, the book hit the stores, eight years from the time I first laid eyes on Wendie’s To Fly.

How did I keep the faith? Notably, Jimi (appearing as an impeccably-dressed, large-bodied American Indian, with ponytail) visited me in a dream, pointing to a “shining city” in my parents’ backyard, the night before the first editor wrote me of her interest in the story.

But most importantly, it was the ongoing support of both my wife and my agent that saw me through. There was a lot of hand-holding (literal and metaphoric), a lot of hoping and strategizing along the way, and a good deal of misery despite my deep belief in “the project.”

But now we’re here, with great response to the book, excellent reviews, an NPR interview, and a few more raised eyebrows (which are to be expected). It’s been a great ride, and I doubt seriously if I’ll ever write a 6,000-word picture book text ever again! 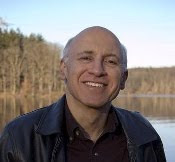 I’m a clinical social worker and psychotherapist (three and a half days a week), specializing in the area of addiction with both teens and adults. Most of the kids I see are 14-15—the age that Jimi is in my book—and I love their humor, idealism, and spunk.

The stories I hear are often sad, and involve physical and emotional abuse, sexual molestation, grief or trauma, and missing or estranged family members.

So I imagine many of these kids to be much like Jimi, with talents and dreams that need to be nurtured by reading good picture books at an early age. Or at least that is my hope. And when I come home from “the job,” it can take time to transition to my “writing life,” even though the process of writing is itself both healing and energizing.

As a longtime visual artist who has also worked with adult artists as a therapist, I encourage people to be human rather than superhuman. Many of us do something (for money) in addition to writing for kids, and we are not machines.

What you write is who you are, and we have to take time to acknowledge whatever it is we’re going through at any given time. That said, the value of a good walk, an inspiring telephone call or email conversation with a friend/spouse or fellow artist/writer, and a delicious piece of cake, should never be underestimated.

If we want to get fresh feeling and ideas into our work, we must treat ourselves well, be kind and forgiving, and make use of bold—and even seemingly naïve—ideas and inspiration when they surface.

We are receivers, after all, listening to the muses and everything around us, just as Jimi did when he stepped out onto the porch of his boarding house so many years ago.

We’re all children—at every age.

Gary Golio is a fine artist and a clinical social worker/psychotherapist who works with children and teens, specializing in the area of addiction. Jimi: Sounds Like a Rainbow is his first book. He lives in Ossining, New York.

3 thoughts on “New Voice: Gary Golio on Jimi: Sounds Like a Rainbow: A Story of the Young Jimi Hendrix”