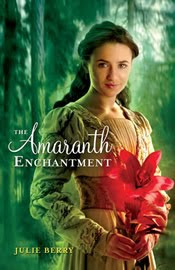 I used to bang my head against that tired maxim. What does a frumpy suburban mom who’s lived a coddled , well-fed life know about anything worth molding into a sparkly fantasy adventure?

It took reams of bad beginnings and ample reassurance from advisors at Vermont College of the Fine Arts to begin to learn what I did know. (One wise instructor, whom I won’t name to avoid obvious flattery, rhymes with Bynthia Beitich Bsmith.)

I knew a little about emotions. I remembered adolescent feelings. That carried me through my first novel, The Amaranth Enchantment (Bloomsbury, 2009).

Soon after, I thought about all the people who’d asked me why, in heaven’s name, I wrote books for girls when I had four sons at home. “Because,” I would answer, “I am a girl. I write for me. My books aren’t cupcakes I bake for my kids.”

Behind that bluster lurked a smidgen of fear. I knew how to be a girl, or at least, a Julie girl. As for boys, I only knew how to feed them and yell at them. I feared I’d fail if I tried to inhabit one.

I’ve since determined that whenever I discover a writerly fear in myself – i.e., a conscious awareness that I wouldn’t dare grapple with the artistic challenge of depicting, say, the inner life and longings of a fish, then that is exactly what I need to try next.

Fears are revelations in shabby clothes.

With my sister, illustrator Sally Faye Gardner, as a collaborator, I set out to learn what I knew about boys. What did they like to read about and think about? 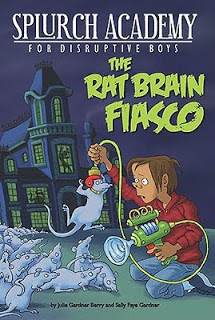 A lot of the same things I enjoy. Comic books and superheroes and mayhem and monsters. We threw those ingredients into our mixing pot.

Who are the enemies in a squirmy boy’s world?

Authority figures. The people that make you sit still and eat kale and stop playing with matches. Psychotic mothers like me, in other words. Irate school principals and disgruntled teachers.

(If you’re a teacher, you’re among the chosen. I’m talking about those Other Teachers.)

Step one – eliminate parents via A) bloody death or B) boarding school. We went for B, and that left monsters and teachers to reconcile.

Then the obvious answer stared us in the face. Middle school teachers are monsters who eat kids for breakfast. It’s true, isn’t it? Sally and I went to the same junior high school back in the day. We remember. Write what you know. Speak your truth.

We needed a setup, a reason for our hero to be plucked from normalcy and thrust into the monster school abyss.

At the time, I was engaged in many drawn-out discussions with my local school to help my son with behavior struggles. One option was to consider sending this son to a specialized, out-of-district school. I took a walk one night to de-stress over his situation – and over my deadline to write a new Chapter One.

Once again, a revelation. Life handed me the solution to my creative challenge.

Chapter One became a meeting with the school – my meetings with my school in disguise—where Cody Mack, his clueless parents, and his pompous principal meet to plan his academic fate. Who better to take on Cody’s education than Dr. Archibald Farley, noted neuroscientist, closet vampire, and Headmaster of Splurch Academy for Disruptive Boys? 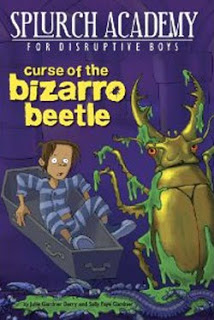 That illustrated chapter of the meeting with Cody, his parents, his principal, and the vampire sold four books.

The first two Splurch Academy: For Disruptive Boys books, The Rat Brain Fiasco and Curse of the Bizarro Beetle (both Grosset & Dunlap, 2010).

So write what you know. Speak your truth. What you’re living now is what you know now. It will seep into your story anyway, so own it. Mine it.

Once when I had a prolonged respiratory challenge, my protagonist often faced situations that left her feeling she couldn’t breathe. Everywhere, breath had thematic significance. Once when I was on a fitness kick, running appeared everywhere in my draft, on literal and symbolic levels. Far too often my protagonists are notably sleep-deprived.

Good thing, too, since there’s been precious little baking in my house since this writing gig began.

Julie Berry grew up in western New York. She holds a B.S. from Rensselaer in communication and an MFA from Vermont College in Writing for Children and Young Adults. She now lives in eastern Massachusetts with her husband and four young sons.

Visit the official Splurch Academy: For Disruptive Boys website, which includes more on the books, updates, events, the scoop on the creative team, links, really nifty activities (Create a Comic!), and contact information.

7 thoughts on “Guest Post: Julie Berry on Writing What You Know”