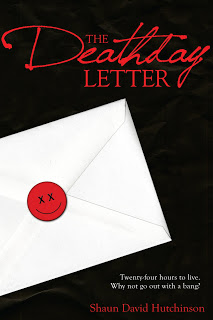 Shaun David Hutchinson is the first-time author of The Deathday Letter (Simon Pulse, 2010). From the promotional copy:

Ollie can’t be bothered to care about anything but food, girls, and games until he gets his Deathday Letter and learns he’s going to die in twenty-four hours. Bummer.

Ollie does what he does best: nothing.

Then his best friend convinces him to live a little, and go after Ronnie, the girl who recently trampled his about-to-expire heart. Ollie turns to carloads of pudding and over-the-top declarations, but even playing the death card doesn’t work. All he wants is to set things right with the girl of his dreams.

I’ll tell you a secret: I suck at plot. Maybe that’s not the sort of thing a writer should admit. It’s like an accountant admitting that he sucks at math. But it’s the truth. Plots are my weak point.

I don’t think writers are either plotters or plungers. Instead I think we all fall on a spectrum somewhere. We all begin in the same place, groping about in the dark with naught but a lamp to guide our way. The only real difference is that some people have a much brighter light. Some writers can see a story from beginning to end before they write a single word, whereas some writers’ lights are barely bright enough to illuminate their shoes.

My light is pretty dim. Generally, when an idea comes to me, I know two things: the beginning and the end. For instance, with The Deathday Letter, I began with Ollie. I knew his story began in bed on the last day of his life, and I knew that it ended 24 hours later with his death.

The rest of the story had to be uncovered one slow step at a time.

For me, it’s like exploring. Like a Chose Your Own Adventure book. Sometimes I take a left when I should have taken a right and I end up having to delete huge chunks of work, but that’s the fun of it for me. Not knowing what’s coming next is how I stay engaged for so long.

I do have a notebook where I’ll write scene ideas, but that doesn’t necessarily mean I’ll ever use them. I let every scene inform the ones that come after. I find that if I outline first, it traps me, boxes me in and takes away my ability to explore. If something unexpected happens, I like having the freedom to follow that new event to its logical conclusion.

The downside to this is that, if you’re like me and suck at plotting, you can end up with a story that doesn’t quite work. One that you have to heavily revise. This is where the plotters with their bright flashlights have the advantage. They have the ability to see those inconsistencies prior to writing the first draft. But hey, that’s what revising is for.

After my first draft, I become an outlining fiend. I have this crazy spreadsheet a friend gave me, that I use to break down every scene by character and location. It’s crazy but allows me to get into the nuts and bolts of the story.

To beginning writers who are maybe struggling with these issues: listen to what works, ignore the rest. You heard me right. There are a thousand voices telling newbie writers how to do this and how to do that. Most of them are wrong…for you.

I’ve heard the amazing Hannah Moskowitz, author of Break (Simon Pulse, 2009), finishes a first draft in a week, writing mostly in front of the television. Most people will tell you she’s nuts, but it works for her and she’s pretty genius in my book.

So when it comes to plotting or plunging or going bat-poop crazy on some blank paper, I say flick on your flashlight, see how far you can see, and forge your own path through the dark.

If it works for you, then it’s the right way to do it.

There’s a secret to being funny. Want to hear it?

Okay, seriously, I don’t know anything about how to be funny. I don’t actually consider myself a funny guy. Ask my brother, he’ll tell you how lame I am. But I suppose that’s not the answer anyone wants. So here’s what I’ve learned.

First, you can’t try to be funny. Every time I’ve ever written a joke, it’s fallen flat. Jokes can’t be forced, they have to come organically from a situation. For me, that’s the biggest rule. Sure, you can do things to enhance a funny situation, but everyone can tell when you manufacture one.

The other thing you have to do is be prepared to to be humiliated. You can’t be self-conscious if you’re going to be funny.

What does that mean? It means that you better be able to handle the idea of your mom reading a book filled with crazy euphemisms for boy parts. It means going there. To that place that other writers won’t go. It means being open and raw and honest even when it hurts.

One of the best examples of this, in my opinion, is Spanking Shakespeare by Jake Wizner (Random House, 2007). In titular character Shakespeare Shapiro, Wizner created a gut-crushingly honest teen that made me laugh harder than I’d laughed in just about forever. And that’s because Wizner doesn’t pull any punches.

This goes back to some great advice I learned from reading Stephen King‘s book, On Writing (Scribner, 2000): Be honest.

What Wizner gives us (and what you must also give, if you’re going to write a comedy) is one hundred percent of your soul. You have to be willing to be honest with yourself and draw from your most humiliating moments, if you’re going to make people laugh.

It’s a painful but rewarding process.

Kissing, for instance. Open up most dramatic books and you’ll find the tentative first kiss between two lovers. It’s beautiful and sweet and tender. It’s magic. And it’s also bull.

I don’t know about you, but my first kiss was nothing like that.

Mine was in the parking lot of a grocery store. I was hot and my breath smelled like Doritos and she was wearing too much make up. I remember thinking that her tongue tasted like bologna and kind of made my skin crawl. The steam from our breath made my nose wet and it felt like snot. When we were done, I slipped a dollar into her Salvation Army bucket and went back into the grocery store to finish my shift.

Not the stuff dreams are made of. But possibly funny.

As a person who writes the funny, I embrace the ugliness of my first kiss. I milk it for its tragic awkwardness. And I’m not embarrassed to share it with you. If you want to write comedy, these are the things you have to do.

Also, you have to be prepared for people who won’t think you’re funny.

Humor is highly subjective. People might laugh at the story of my first kiss because they’ve had similar, cringe-inducing experiences. But maybe there’s someone out there whose every kiss has been fairy-tale magic wrapped up in candy-cane bows. Without a similar experience to draw from, that person might read my story and simply think me a sad, sorry individual. But that’s the risk you take.

I knew when I sold Deathday that the high proportion of boy-oriented jokes might be a turn-off to some female readers, but it was a risk worth taking, and if you want to be funny you’ll have to take similar risks.

Comedy is like love: you can’t force it. You just have to be open to it, ready for it, and prepared for total humiliation. I may not know anything about being funny, but I know a heck of a lot about being embarrassed.

Check out The Deathday Letter website, read chapter one (PDF), and learn more about Shaun from Simon & Schuster. Visit him at facebook and his tweet deck.