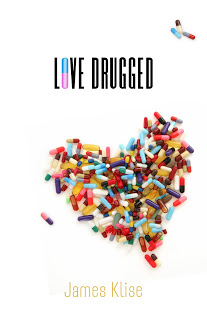 James Klise is the first-time author of Love Drugged (Flux, 2010). From the promotional copy:

Fifteen-year old Jamie Bates has a fail-safe strategy for surviving high school: fit in. Keep a low profile. And, above all, protect his biggest secret—he’s gay.

So when a classmate discovers the truth, a terrified Jamie decides it’s time to change. After accepting flirtatious advances from Celia, the richest and most beautiful girl in school, Jamie steals an experimental new drug that’s supposed to “cure” his attraction to guys.

At first, Jamie thinks he’s finally on track to living a “normal” life. But at what cost?

As the drug’s side effects worsen and his relationship with Celia heats up, Jamie begins to realize that lying and using could shatter the fragile world of deception that he’s created—and hurt the people closest to him.

A star-crossed romance with humor and heart, Love Drugged explores the consequences of a life constructed almost entirely of lies . . . especially the lies we tell ourselves.

Great question, and quite relevant to this book. My cover features all those beautiful pills, which fairly shout, “edgy!” My novel isn’t about recreational drug use—it’s about an experimental prescription drug intended for a very specific therapeutic purpose. But I recognized going in that any story about a teenager stealing and trying an experimental drug ventured into edgy territory.

Also, the narrator of Love Drugged is a gay teenager. Some readers will consider that fact alone edgy; others will consider the fact that he is afraid of being gay edgy. To be honest, these factors were a large part of the appeal of writing it.

As we all know, it’s exciting to write and read about characters who engage in questionable, dangerous, or self-destructive behaviors, things that make us cup hands over our mouths and say, “No, no—don’t do that!”

For me, the “edgiest” part of writing the book had to do with handling the narrator’s thoughts regarding sex and desire. I think we can agree that any novel that honestly captured a typical teenage boy’s thoughts would border on, well, pornography. But writing a pornographic novel for teenagers is not at the top of my “to do” list.

So I decided to let my characters simply talk about sex a lot. Talking about sex is a way to approach the issue with something of a filter. The fact that I can give Love Drugged to my students and to my family without blushing tells me that I accomplished my goals.

One YA novel, by the way, that addresses the subject of boys and sex really well (and in such a funny way) is Doing It by Melvin Burgess (Henry Holt, 2002).

It tackles the subject so well, in fact, that our library copies are stolen every year. Seriously, I need to replace them every fall! Let me tell you, theft is very strong indicator that your novel speaks some truth to readers. 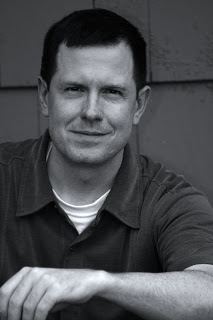 I might not be writing for teenagers if they didn’t surround me all day long. Prior to becoming a high school librarian, I wrote and published short stories about the troubles of grown-ups, and I was happy doing so for more than a decade.

That said, now that I’m writing for teens, I am addicted to it.

Writing for young people allows me to express a character’s motives very directly—it requires more “telling” along with the “showing.”

Also, there is a real sense of urgency in writing for teens, a feeling of: Kid, if this particular insight or idea doesn’t reach you at this particular stage of your life, how and when will it ever reach you?

Also, my writing benefits from the daily conversations I have with teens about books. I see check-out trends in the library, and it’s always interesting to see what prompts a student to take out a book, and why they may reject it after reading—or scanning—only a page or two.

They are passionate, demanding readers, impatient for story, and they always remind me what matters: vivid characters and compelling, well-paced plotting.

Two of our favorites in the teen book club this year were Acceleration by Graham McNamee (Wendy Lamb Books, 2003) and The Burn Journals by Brent Runyon (Knopf, 2004).

These books grab the reader by the collar in the first chapter with irresistible narrators. And they both tell stories that you can’t put down.

The other thing is, my work in the library surely gave me an advantage when it came to selling the manuscript. I am physically surrounded by young adult literature all day long, stacks of great books waiting to be shelved. And most of those books include very useful acknowledgements pages!

Before I wrote my first query for Love Drugged, I had my list of “dream editors” whose work I admired, whose projects reflected a certain aesthetic that matched mine.

I didn’t use an agent for the first book, and it sold fairly easily. I think the reason I was able to do that is because I knew so much about the market through my day job. I felt like the universe was telling me, “Pssst, look—this is the kind of thing you are supposed to write next.”

Finally, I listened. I’m so glad I did!

Klise is a high school librarian in Chicago, where he advises the student literary journal, book club, and the gay-straight alliance. His short stories have appeared in many journals, including StoryQuarterly, New Orleans Review, Ascent, and Southern Humanities Review.