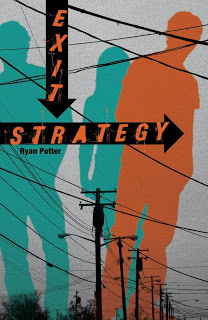 Ryan Potter is the first-time author of Exit Strategy (Flux, 2010)(blog). From the promotional copy:

Looming above Zach Ramsey’s hometown of Blaine are the smokestacks of the truck-assembly plant, the greasy lifeblood of this Detroit suburb. Surrounded by drunks, broken marriages, and factory rats living in fear of the pink slip, Zach is getting the hell out of town after graduation. But first, he’s going to enjoy the summer before senior year.

Getting smashed with his best friend Tank and falling in love for the first time, Zach’s having a blast until he uncovers dark secrets that shake his faith in everyone–including Tank, a wrestler whose violent mood swings betray a shocking habit.

As he gets pulled deeper into an ugly scandal, Zach is faced with the toughest decision of his life–one that will prove just what kind of adult he’s destined to be.

Exit Strategy is a realistic story geared toward older teens. I based the gritty, blue-collar setting largely on what I observed growing up in a similar community outside of Detroit. There’s plenty of alcohol use and cigarette smoking in the story among both teens and adults.

As a writer, I think you run into trouble if you start sounding preachy about the dangers of such “edgy” behavior. On the other hand, it’s real behavior. Many teens smoke. Many teens drink. Some kids experiment and decide they’ll live without that stuff. Others end up with lifelong habits. These are facts of life. In that sense, I decided nicotine, alcohol, and steroid use were important topics I wanted to explore in this book.

Teens are smart readers. What they don’t want is a health lesson disguised as a novel. For example, in my book, bad things happen whenever the main character decides to drink, but I never come right out and say that.

It’s the story that counts, so I say, make your characters as edgy as you want, but be honest about it. In other words, stay away from the moral bully pulpit. You can teach a lesson, but don’t be too blunt about it. It’s a fine line. You learn how to handle it effectively through practice and feedback.

Exit Strategy has been out for a few months now, and some of the most consistent praise I’ve received is in regards to how I handled the drinking, smoking, and drug use. I didn’t make those issues take center stage in the story. Rather, I used them to add depth and definition to the characters. 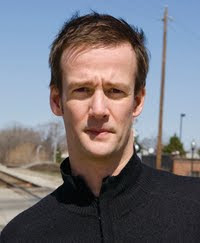 I connected with my original agent in 2006. After polishing Exit Strategy the best I could, I learned how to write a good query letter. I can’t stress the importance of first impressions, and that query letter is the first impression you give to any agent who reads it. That’s the top piece of advice I can give to new writers seeking representation. Write a knockout query letter. Everything you need is one Google search away.

After my query was ready, I spent countless hours narrowing down the twenty or so agents and agencies I thought made good matches for my story. This leads me to the second most important piece of advice for writers seeking the right agent. Know whom you’re querying! Don’t send some massive email blast to thousands of agents gleaned from a list you find on a website.

It’s tempting, I know. I’ve been there. The problem is most of the agents on the receiving end of an email like that probably won’t have an interest in your work. It’s best to take the time to find agents who represent works comparable to yours. Aim high, by all means, but do it right!

Of the twenty or so queries I sent, three or four agents requested the first three chapters. I ended up signing with Michelle Andelman of the Andrea Brown Literary Agency. She moved on to other things a couple of years ago, but she sold Exit Strategy to Flux and, for that, I’ll always be grateful. My current agent is the outstanding Jen Rofe, also with the Andrea Brown Agency.

I love the Andrea Brown Agency. The agents have great track records and provide valuable feedback on all phases of the publication process. I recommend them highly, and I’m living proof that they represent unknown, first-time writers!