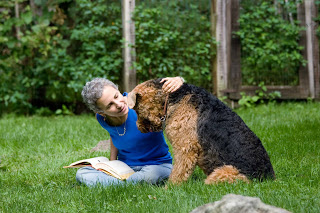 Outrage motivated my first picture book, Betsy Who Cried Wolf, illustrated by Scott Nash (HarperCollins, 2002), obviously based on “The Boy Who Cried Wolf.”

In the original tale, when the Boy cries wolf for the third time and there really is a wolf, the villagers abandon him by not coming to his aid.

I’m mad at them for that. They deserve to lose their flock.

After all, the Boy proves twice that he isn’t mature enough to be a shepherd. If he isn’t ready and they let him keep his job, they have an obligation to come no matter how many times he lies.

I’m opposed to letting a child suffer a cruel fate, so to set things straight, I leaped into storytelling. Betsy is utterly honest. She would withstand torture (luckily, it doesn’t come to that!) before she would lie. But she’s up against a clever, desperate, hungry wolf with a plan, and the story takes off from there.

The impetus for Betsy Red Hoodie (HarperCollins, 2010) was to support Betsy Who Cried Wolf. Several editors told me that a second Betsy book would help keep the first alive. Despite the zillions of series in the world, it had never occurred to me that this could be a strategy. 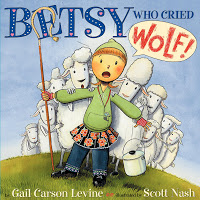 My first step was to read Aesop, who is to blame for “The Boy Who Cried Wolf.” I was hunting for a fable involving wolves or sheep, and I found a few but nothing just right. Finally, I left fables behind and thought of “Little Red Riding Hood.”

Questions often start me revamping fairy tales. In this case, I wondered how Little Red can be taken in by that conniving wolf. And why doesn’t she see in half a second that the creature in her grandma’s bed is not her grandma?

Aha! Rather than a fleshed-out character, she’s really an automaton acting out a moral lesson. So what can I do with the story to make it more complex…and cheerful? The original–even in the version where Little Red and Granny are rescued by the hunter–is a bummer. 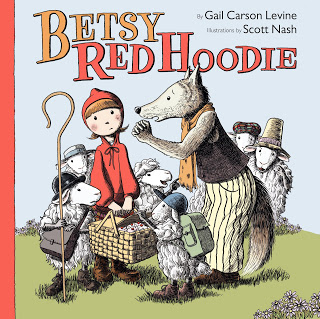 My Betsy is nothing like Little Red. She would never be tempted off her path by the wheedling of a strange wolf.

But her best friend and fellow shepherd Zimmo – a familiar wolf – has persuasive power over her, so she takes him with her to Grandma’s house on her first trip there without her mother, despite the warnings of a farmer and a hunter.

Zimmo has a plan, just as he did in the first book, not a diabolical, people-eating plan, but enough of one to give the story picture-book level tension when he deserts Betsy halfway to their destination.

For writers who want to work with folk and fairy tales, I suggest starting with stories that make you mad or leave you scratching your head.

Why does the witch want Rapunzel? Why do the elves stop visiting the shoemaker once they have clothes? Doesn’t Snow White resent being made a servant by the seven dwarfs, after a while anyway?

Then dream up characters who can bring the answers to life. Put them together in a scene or two, and you’re off, careening down the story road in your own pumpkin coach.

Gail expands on the topic of writing from fairy tales in her blog post, “Spinning Fairy Tales.”